The nearly 200 nations meeting now at the “COP10” Convention on Biological Diversity in Nagoya, Japan recognize the large financing ‘gap’ between current spending on biodiversity conservation and the amount of funding actually needed.  But what is exactly is the size of the gap? And how do you build a funding bridge with this uncertainty? The latest from Nagoya. 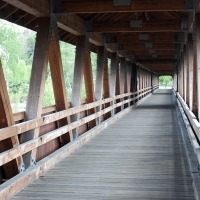 The nearly 200 nations meeting now at the “COP10” Convention on Biological Diversity in Nagoya, Japan recognize the large financing ‘gap’ between current spending on biodiversity conservation and the amount of funding actually needed.   But what is exactly is the size of the gap? And how do you build a funding bridge with this undertainty? The latest from Nagoya.

26 October 2010 | NAGOYA | Japan | As a first step in answering where the precarious state of biological diversity stands, the Convention on Biological Diversity (CBD) Secretariat released its pilot Global Monitoring Report just before the COP-10 kicked off last week. The report attempts to evaluate the state of biodiversity finance.   But it does not make any estimate of the total financial cost of preserving and restoring precarious species and ecosystems throughout the world.

The Little Biodiversity Finance Book just launched by the Global Canopy Program as a guide to investments in natural capital, meanwhile, estimated current spending for biodiversity and ecosystem services at nearly $40 billion. These documents offer a good start for trying to figure out where the world stands on this side of the finance gap.   But more work is needed to better understand the precise level of current finance and how and where it is spent.

During the current talks taking place this week in Nagoya Japan, participating national representatives recognized this need. There is a strong likelihood that levels of current finance for protected areas, from all sources, even those beyond Official Development Assistance, Global Environment Facility and domestic government budget allocations, will be taken up by this Convention as one of the indicators related to financial resources.

The Power of Targets

When the financial gap is well defined, however, it is far more easily bridged. At a side event today, The UN Development Programme, The Nature Conservancy, and a few countries highlighted an attempt to do just that for protected area financing in Latin America.

Their challenges can be illustrated by a family visit to a local or national protected area.   The family, if they paid an entrance fee, probably didn’t consider the cost of the office supplies in the ranger station, the   cost of police to ensure   protected areas aren’t turned into fields of illicit drugs, the construction cost of the handicap-accessible ramp, or the benefits   or the park staff’s benefit package. And yet all of these add up to the cost of protecting nature.

The issues in this example are multipled when considering the global scale of finance for protected areas. The problem is that not many countries know how much is currently spent on   protected areas.   Much less is known on how much is needed to effectively manage and protect their valuable biodiversity-rich sites. So in big global negotiations like the COP10, negotiators only have an idea that some vague big figure of money is needed for protected areas to halt the loss of biodiversity worldwide. And that doesn’t make for well-informed negotiations.

It is not surprising that government budgets are shown as a critical source of funding for   protected areas.The lead author of the report, Andrew Bovarnick, and lead Natural Resource Economist, UNDP, notes that providing this data helps governments make a case for increasing   protected area budgets.

Indeed, a few presenters at a COP10 side event illustrated how they determined current and gap financing needed for their country’s protected area systems. Colombia found a funding gap of between $5-$22 million per year. Jose Yunis Mabarak, of The Nature Conservancy, explains that they are working to explore all avenues to raise more finance, including innovative mechanisms such as   payments for watershed services. He added that there are laws in place in Colombia that should provide millions of dollars for conservation, but are simply not enforced. So simpler strategies, such as a little lobbying, can offer a good “bang for your buck,” he said. Another option is earmarking some of the money made from mining and oil extraction revenues, estimated at approximately $3 billion each year.

And Costa Rica proved yet again at this international convention why it is a leader in ecosystem finance. ”Forever Costa Rica” is a new imitative to improve and expand the country’s   protected areas network.   This would make Costa Rica the first developing country to achieve the goals set forth by the Convention of Biological Diversity’s Programme of Work on   protected areas. Costa Rica also took   part in the financial gap analysis. With a well thought out funding target, Costa Rica raised over $50 million for the initiative.

“Having a specific target [for conservation goals] made it much simpler to have a target of the funding we need,” their representative said.

Once the bridge is built to span the financial gap to fund biodiversity preservation, it must be secured. For that, environmental funds have proved a popular option since the mid-90s. They secure finance on two fronts. First, they supplement   protected areas budgets and ensure those budgets are well spent. Second, they are usually independent from the government, ensuring their safety from tpilfering for other uses.

Environmental trust funds are an important tool for conservation.   They have been discussed at multiple Convention on Biological Diversity side events. The Conservation Finance Alliance, for example, presented its new survey of the financial performance of those funds last week.   Meanwhile, RedLAC, the Latin American and Caribbean Network of Environmental Funds, discussed innovative financing for funds at the COP10 meeting just last night.

And water funds are even sexier than the environmental funds these days. These funds receive finance from various sources and generally deliver it to   protected areas and some private land upstream of large cities to secure their water supply. The Nature Conservancy is currently working to implement 14 such programs in Latin America and gunning for 32 in the next ten years. Quito started it, Bogota is in the works, and Lima is the next capital city in the crosshairs.

Rob Wear of The Nature Conservancy noted, “This is a way to create a ‘lock box’ to get funds to go where they’re designed to go.”

Peeling Away the Mystery of UN Biodiversity Talks – one Layer at a Time
Nagoya at the Halfway Mark: Mixed Messages on Financing
A Green Development Mechanism for Biodiversity?
Nagoya Studies Highlight Gap in Biodiversity Finance
Ecosystem Values Converge in Nagoya’s Ecosystems Pavilion
Financing in Spotlight as Biodiversity Talks Open in Nagoya

Becca Madsen Becca Madsen is the Biodiversity Program Manager at Ecosystem Marketplace.Ã‚Â  She can be reached at bmadsen@ecosystemmarketplace.com

Matthew Cranford is a Doctoral Researcher at the London School of Economics, he works with the Global Canopy Programme on ecosystem finance and can be reached at m.c.cranford@lse.ac.uk.