Kenya can earn nearly $200 million per year and slash its greenhouse-gas emissions by using carbon finance to improve its forest management, modernize its charcoal production, and disseminate clean-burning cookstoves, according to a new report issued jointly by the Kenyan government and the United Nations Environment Program. 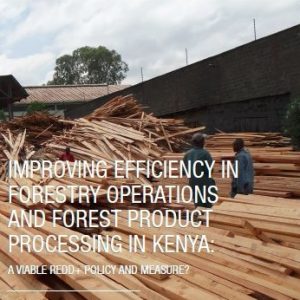 This story is cross-posted on Kiambu County News

23 March 2016 | Increasing efficiency in Kenya’s forestry sector could cut greenhouse gas emissions by 27 per cent over 2010 levels, helping the country meet its climate commitments under the Paris Agreement and bringing economic benefits of $188 million per year, according to a joint United Nations and Kenyan government report released on Monday, the International Day of Forests.

Entitled “Improving Efficiency in Forestry Operations and Forest Product Processing in Kenya: A Viable REDD+ Policy and Measure?”, the report finds that investing in efficiency measures in forest product processing and operations could contribute to reducing deforestation and forest degradation while delivering a reduction of 20 million tonnes of carbon dioxide equivalent (tCO2e) per year. Kenya’s 2010 emissions were 73 tCO2e, the majority of which came from land-use, agriculture and forestry.

The investments proposed in the report—prepared by the United Nations Environment Programme (UNEP) with the United Nations Collaborative Partnership on Reducing Emissions from Deforestation and Forest Degradation (UN-REDD) in developing countries, Kenya’s Ministry of Environment, Natural Resources and Regional Authorities, and the Kenya Forest Service—would cost close to $39 million per year, less than 25 per cent of the potential returns.

The report identified three opportunities that are expected to bring major socio-economic benefits while achieving results in REDD+ – an expanded REDD approach that includes the role of conservation, sustainable management of forests and enhancement of forest carbon stocks. These are investments in enhancing efficiency in charcoal production, fuelwood consumption at household level, and fuelwood consumption at industrial level.

The report notes that the viability of these measures makes a strong case for their inclusion in Kenya’s National REDD+ Strategy. Given the economic gains, Kenya could assess what financial and regulatory incentives are needed to bolster both public and private investments in the forestry sector.

“We are also reviewing the best ways to address the direct and indirect drivers of deforestation and forest degradation, so this report on enhancing efficiency in forest operations and products processing comes at a timely moment. While we expected increased efficiency in charcoal production and wood fuel consumption to be the most attractive measures, the report contributes invaluable empirical evidence on carbon and non-carbon benefits these efficiency gains can bring. We now have a strong case to build political momentum for new transformative and innovative policies.”

Achim Steiner, UNEP Executive Director said, “Kenya has pledged to play its part in the Paris Agreement by bringing in more clean tech, reducing reliance on wood fuel, increasing tree cover and enhancing energy and resource efficiency across all sectors. The recommendations in this report show clearly how the forestry sector can make a significant contribution to these commitments. And beyond improving the health of Kenya’s environment, the economic benefits from increased efficiency in forestry also represent a sound return on investment.”

Looking at specific actions than can bring REDD+ benefits, the report highlights charcoal production saying proposed measures range from training 100,000 charcoal producers to introducing more-efficient kilns. Improved technologies can cut the amount of wood needed to produce 1kg of charcoal from 10kg to as low as 3kg. These measures can bring 16.5 million tCO2e per year of emission reductions and $30 million per year in benefits from reduced forest loss.

For charcoal and firewood in cooking stoves, the proposed measures target the adoption of five million improved cook stoves to replace inefficient cooking devices and reduce fuelwood demand. This can bring savings of 2.4 million tCO2e per year in terms of emission reductions. The economic benefits from reducing drivers the forest loss is estimated at around $3.5 million per year. Additional, but unmeasured, financial benefits would follow from reduced indoor air pollution and improved health, especially among women and children.

Increasing efficiency in wood usage in industrial processes: Simple measures can generate emission reductions of 2.0 million tCO2e per year. The total economic value that may be preserved by reducing drivers of forest loss is estimated at around $1.9 million per year.

While the report is Kenya specific, its findings are also of interest to Central African nations with large amounts of forest cover, which could employ similar methods to combat climate change and boost their economies.

Njenga Hakeenah is a Nairobi-based reporter focused on environment and land issues. He can be reached at [email protected]