Following the landmark use of political risk insurance on a REDD+ project in Cambodia, project developers elsewhere have also tapped into the insurance – most recently on a bamboo reforestation project in Nicaragua. Despite these examples of early mover activity, awareness of political risk coverage and how it can help finance carbon offset projects is still very limited. 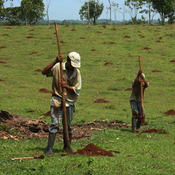 Following the landmark use of political risk insurance on a REDD+ project in Cambodia, project developers elsewhere have also tapped into the insurance – most recently on a bamboo reforestation project in Nicaragua. Despite these examples of early mover activity, awareness of political risk coverage and how it can help finance carbon offset projects is still very limited.

More specifically, the project helps Buddhist monks and other community members reduce greenhouse gas emissions from deforestation and forest degradation (REDD), and it does so in a way that could serve as a template for community-based REDD projects around the world. But it’s located in a country that most investors don’t understand. So TGC asked OPIC, the US government’s primary development finance agency, to provide protection against the risks of expropriation, war, and civil unrest – risks familiar not only to Cambodia, but to countries around the world. In the very first instance of political risk insurance for a forest carbon offset project, OPIC came through with $900,000 in political risk insurance – a service that the World Bank Group’s Multilateral Investment Guarantee Agency (MIGA) also offers.

Between the two of them, OPIC and MIGA have so far insured several carbon offset projects around the world designed to promote sustainable forestry, wind farms, and solar energy, allowing them to move forward in some of the world’s riskiest political and economic environments.

In 2012, MIGA provided its first political risk insurance to a carbon offset project on the Atlantic Coast of Nicaragua, where EcoPlanet Bamboo (EPB) has been developing a forest carbon offset project to support its work reforesting degraded pasture land with guadua aculeate, a native bamboo species. The project is just one piece of the company’s growing efforts to provide timber manufacturing industries with a sustainable alternative fiber in order to reduce pressure on natural forests.

While EPB hopes to use carbon finance to meet debt repayments and support bamboo-processing activities and social programs in the area, MIGA’s $27-million guarantee backs the company’s investment in the purchase and conversion of degraded land into commercial bamboo plantations for the sale and export of bamboo fiber.

Troy Wiseman, CEO and Co-Founder of EPB, says he was initially attracted to MIGA’s political risk coverage due to the perception of Nicaragua as a high-risk environment, especially in Europe, where EPB had the opportunity to raise debt finance for the project. Despite Nicaragua’s recent economic turnaround, the country still has a reputation among investors as one of Latin America’s least-developed countries, with high poverty rates following decades of political instability. Political risk insurance, he reasoned, could help overcome that hurdle and lower the interest rate at which EPB could access capital.

“Once we had political risk insurance, you could take the risk argument away because the cost of capital  would come down,” says Wiseman. “It came down for us by about 40%.”

As for the insurance itself, aside from the potential payoff in case an insurance claim is triggered, Wiseman notes that having MIGA on the contract reduces the risk that expropriation even occurs in the first place. MIGA underwriter Gloriana Echeverria says that’s partly because the Nicaraguan government is a shareholder in MIGA, which means it’s literally invested in its performance.

“This reduces the chance of expropriation because the government is unlikely to interfere with a project that has MIGA – and therefore the World Bank – as its partner,” she says. “We’ve gotten involved in over 100 cases where the investor has a certain problem with the government interfering. MIGA can mediate between the government and the investor to arrive at a solution that will make both parties happy.”

Political risk aside, the decision to invest in the project using carbon finance required taking on a significant amount of risk in its own right. “No one really had a proven bamboo methodology at a commercial level that could be duplicated,” says Wiseman. Indeed, EPB is the first organization to use a bamboo-based carbon offset methodology on a project validated under the Verified Carbon Standard (VCS) and the Climate, Community, and Biodiversity Alliance (CCBA), and is also certified under the Forest Stewardship Council for sustainable forest management.

EPB’s project is not a pure carbon offset project insofar as it derives revenues from bamboo sales. MIGA’s financial analysis of the project takes into account all revenue streams. For projects that are strictly dependent on carbon finance, Echeverria says MIGA’s financial analysis could differ in accounting for the financial sustainability of the project. A project relying solely on carbon revenues could be seen as a riskier project to insure.

For project developers trying to distinguish between OPIC and MIGA insurance, the primary difference is that OPIC requires majority US participation in an investment, whereas MIGA is open to nationals of any of its 179 member countries as long as the coverage is for a cross-border investment. MIGA is usually competitive in the riskier countries where investors are more concerned about getting the World Bank umbrella effect of deterrence, whereas OPIC tends to focus its activities in countries where a strong bilateral relationship might exist with the US. There is also a private political risk insurance market, but arguably without the deterrence effect. It is unclear whether carbon offset project developers have used this market.

Ultimately, MIGA can provide up to $220 million in insurance coverage per project, whereas OPIC can provide up to $250 million  – both agencies able to provide additional coverage through reinsurance. But how affordable is political risk insurance at the end of the day? And what incentives exist to help project developers invest in poor and risky countries where capital is hard to come by?

The cost of the policy depends on the country, with insurance premiums rising significantly for particularly high-risk environments. For countries in the middle tier, the insurance itself may not be prohibitively expensive, but cash-strapped project developers looking to tap into political risk insurance can ultimately face additional upfront costs if—unlike EPB or TGC—they aren’t already in compliance with the prerequisite environmental, anti-corruption, and other policies required to land MIGA and OPIC insurance.

“There is already significant environmental work that project developers have to deal with in order to register with VCS and CCBA, which may be costly,” says Ruth Ann Nicastri, Managing Director of Political Risk Insurance at OPIC. “Terra Global Capital had already started those processes before they sought political risk insurance from us, so those costs were already taken into account in their budget. For project developers working on projects that haven’t taken the steps to obtain that kind of rigorous certification, it might be onerous to suddenly have to meet OPIC’s environmental requirements.”

For smaller projects that cannot afford certain evaluations, OPIC sometimes undertakes these evaluations as part of its own due diligence process, she notes. OPIC also provides discounted rates for small businesses, while MIGA provides subsidized rates for investments of $10 million or less with an average 25% discount, with specific rates depending on the country.

Beyond that, some have floated the idea of having public entities, possibly domestic, help subsidize insurance fees. “Depending on the country, it may be possible to provide additional layers of subsidy or premium pricing in a way that could offset political risk insurance premiums,” says Cameron Prell, Senior Counsel at US-based law firm McGuireWoods.

Project developers also have the option to apply to grants from donor agencies such as FMO, the Dutch development bank, that have strong stated interests in sectors relevant to carbon offset projects such as agribusiness, energy, food, and water to underwrite the cost of the insurance premium instead of provide a traditional grant or donation, Wiseman notes.

If a tree falls in the forest…

In spite of early-mover activity, there is still relatively low awareness that political risk insurance is available for forest carbon offset projects through MIGA and OPIC. The default risk management tool remains the buffer pool approach, which requires that project developers set aside carbon credits as reserves in order to cover unforeseen losses in carbon stocks.

“I don’t see the buffer pool approach as having a necessarily conflicting goal as these new emerging products, but the purpose of the buffer pool is definitely not to encourage financing,” says Stephen Matzie, Investment Officer at the US Agency for International Development (USAID), the US federal government’s principal aid agency. “It does require a significant amount of credits over the project’s lifetime, but I think it’s one of those things that can be tweaked to encourage private financing.”

“OPIC and MIGA political risk insurance are advisable in many emerging markets that lack a robust regulatory regime for forest carbon,” Prell says. “However, the riskier markets are going to potentially result in higher premiums. Regardless, the insurance products should not be viewed as a sufficient instrument able to cover the current market demand and price risks inherent in forest carbon projects.”

There has been some push to expand the offering of products that can cover exposure to political risk alongside other risks. “The private sector and willing development finance institutions are developing additional guarantees that may address some measure of market risk, including project performance and valuation,” he notes. “The coverage is not 100%, but such mechanisms could provide some measure of risk mitigation for investors.”

USAID’s Development Credit Authority has been a prime innovator in this space, having been approached in early 2012 to develop a special loan guarantee for REDD activities. The agency is now working on several transactions simultaneously, with the one furthest along covering the Choco region in Colombia where it’s helping local communities pull together a REDD project. USAID’s guarantee covers a broad range of risks in addition to political risk, including those associated with verification, weather, and the production of carbon credits.

Carbon offset projects continue to enter the pipeline to tap into political risk insurance on a case-by-case basis, including new prospects in Colombia, Brazil, and Indonesia. However, whether the market can see scaled-up adoption is hard to say.

On OPIC’s end, Nicastri says, “As far as we can tell, we’re still the only ones willing to cover regulatory risk for forest carbon. However, OPIC is happy to work with other insurers to provide the product to a broader range of investors.”

As for EcoPlanet Bamboo? “We plan to use political risk insurance in every country where we plant bamboo as we embark on a new goal of reforesting 1 million acres of degraded land in Southeast Asia and Brazil, while expanding our current footprint in Africa,” says Wiseman. Some of this work could potentially include a carbon offset element.

Daphne Yin is the Voluntary Carbon Associate in Ecosystem Marketplace’s Carbon Program. She can be reached at dyin@ecosystemmarketplace.com.