The European Union is a global leader in combating climate change, but those fine Italian leather jackets often come from cows raised on land that had been rainforest just a few years ago. Indeed, new research shows that European consumers are driving illegal deforestation around the world. 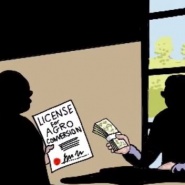 17 March 2015 | Quick! What do Italian jackets, British beef, and French chickens have in common?

The group found that leather from cattle raised on illegally-deforested land tends to end up in Italy, while the beef ends up in the United Kingdom, and the soy ends up in France-mostly to feed the country’s chickens and pigs. The Netherlands and Germany are the largest importers of deforestation-linked palm oil, which goes into a variety of consumer products including cosmetics and food products.

The findings dovetail with those of Ecosystem Marketplace publisher Forest Trends, which found last year that agriculture is driving deforestation around the world, and almost half of global deforestation takes place illegally.

The report highlights the global forces driving deforestation and – ultimately – climate change, and it comes as governments and companies around the world pledge to slow or eliminate practices that drive deforestation. Next week, Ecosystem Marketplace, together with WWF and CDP, will launch a new site called Supply-Change.org to help people track the actions companies are taking to reduce deforestation.

Illegality is defined according to producer country laws. In some country that means converting forests to land for commercial agriculture without the right to clear the land, or using permits that were illegally issued or obtained to convert land. In some cases, even when companies have the right to convert land, they have been found to clear more forest than permitted, or to neglect agreed‐to payments to local communities or the government.

Globally, Fern says, the European Union imports 25% of all soy and 18% of all palm oil harvested on illegally-deforested land, 15% of all such beef and 31% of all such leather.

The Netherlands is the point of entry for one-third of all these products entering the EU, but much of that flows on to other countries. Still, combined, the Netherlands, Italy, Germany, France and the UK imported 75% and consumed 63% of the forest-risk products imported into the EU.

Indonesia and Brazil: Leaders in Illegality

“EU consumption does more than devastate the environment and contribute to climate change,” said Sam Lawson, author of the report. “The illegal nature of the deforestation means it is also driving corruption, and leading to lost revenues, violence and human rights abuses. Those seeking to halt the illegal deforestation have been threatened, attacked or even killed.”

The report recommends that the EU ramp up its Forest Law Enforcement, Governance and Trade program (EU-FLEGT), which is designed to combat illegal deforestation.

“Demand for forest‐risk commodities is being driven by a number of different EU policies, such as agriculture, trade and energy policy,” says FERN co-founder Saskia Ozinga. “We urgently need an Action Plan to make these different policies coherent, reduce EU consumption and ensure we only import legal and sustainably produced commodities.”