When world-renowned primatologist Biruté Galdikas learned that palm oil company PT Best was about to destroy Borneo’s Seruyan Forest, she thought all was lost. Then she met ecosystem entrepreneur Todd Lemons and industrialist Rusmin Widjajam. Here’s how they blended cutting-edge finance and old-fashioned moxie to outmaneuver Big Palm Oil and save the forest. 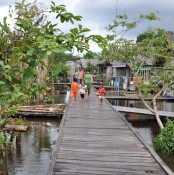 This article is second in a series.

23 June 2014 | Pak Ahmed has a little game he used to play, sometimes by himself, and sometimes with friends.

He’d begin just after the sun woke the sky above his village of Telaga Pulang, which stands on stilts along the eastern bank of Borneo’s Seruyan River. He’d continue as he rolled his first cigarette of the day and traversed the wooden bridge to the boardwalk that serves as the village’s spine. Then he’d climb into his hand-hewn  klotok,  fire its engine, and klatok-tok-tokk out into the broad, dead river – where he knew the game would end, and not the way he hoped.

Soon, children would be clattering along the elevated structure in their school uniforms, and their mothers would gather outside the two shacks that serve as general stores, each stocked with soaps, salves, and other sundries derived from the product that was slowly enslaving them.

“Before Palm Oil came, we fished from about 6am to noon, and then relaxed,” he says. “Sometimes, we hunted in the woods in the afternoon.”

Like most of the people of Telaga Pulang, he speaks of the product as if it were a sentient entity devouring the forest. For them, Palm Oil isn’t just a fatty acid used in toothpaste and cereal. It’s a proper noun encompassing the product, the plantations, the imported workers, and the dead river.

Palm Oil, he explains, came to this part of Borneo in 2005, when workers carved shallow drainage canals into the soft peat soil on the western bank of the river, across from Telaga Pulang. Then they strategically removed teak and other choice timbers before grinding 10,000 hectares of forest into pulp, murdering any orangutans who got in their way and kidnapping the now-homeless sun bears, clouded leopards and gibbon apes, which they sold as exotic pets.

After dispatching the forest and its inhabitants, the workers inserted palm saplings as far as Pak Ahmed could see. Then they fertilized the saplings, and the fertilizer dribbled down the canals and into the river, where it fed massive algae blooms that killed the fish and destroyed the economy of his village. Mines came, too, and their poisons killed more fish, so upstream fishermen began dropping explosives instead of nets, depleting the stocks even further.

Yet, as he pulled his bamboo cage up out of the water on this day in 2007, Pak Ahmed still indulged that little tingle of hope that kept him coming back day after day, week after week – for months after the rest of his family and most of his neighbors had gone to work for Palm Oil. That tingle was to him what the unturned card was to the blackjack addict, and it was the only prize his game ever yielded anymore, because the game was this: as he awakened and rowed and worked, Pak Ahmed tried to pretend that he didn’t know what he’d find when he pulled his bamboo traps up from those dead waters.

Before the mud parted and the cage emerged into the light, he could still imagine it was 2005 instead of 2007.

An unidentified fisherman in Pak Ahmed’s village puts the finishing touches on a new trap.

But eventually the  cage did emerge, and in it Pak Ahmed saw what he knew he’d see: dozens of baby “fingerlings” flopping desperately in a basket designed for one or two fat adults 100 times their size. In terms of saleable product, his hauls were down 90%, and it was about to get worse.

A company called PT Best had laid claim to the entire Seruyan Forest, which is a massive natural filtration system that regulates water flows and provides non-timber forest products like honey, wax, and wild rubber for hundreds of other villagers. It also acts as a protective buffer to a quarter-million hectares of peat forest in the Tanjung Puting National park, which means its destruction would affect the rest of us, too.

That’s because peat is a thick, rich loam of decaying plants that have been accumulating for thousands of years, locking up carbon in the process. If the peatland went, it would release hundreds of millions of tons of carbon dioxide and methane into the atmosphere, accelerating climate change.

Canals drain the peat and push fertilizer into the river .

Eight thousand miles to the west, Biruté Galdikas was engaged in her own variation of the game as she frantically zipped between appointments in Los Angeles, where she’d gone in a futile effort to raise the money she needed to save Pak Ahmed’s forest.

Like the Seruyan River, the City of Angels had been a fertile fishing ground. It served as Galdikas’s fundraising hub and helped her build Orangutan Foundation International (OFI) into a bulwark against the slaughter of orangutans in the Tanjung Puting.

Unlike the Seruyan, however, Los Angeles hadn’t stopped delivering. It had simply been eclipsed by Palm Oil, which generates roughly $1 million in profit per year for every thousand hectares harvested. That’s  more than OFI’s entire operating budget, and PT Best had a license to convert 150,000 hectares of forest to palm-oil plantation. Each of those hectares would become another cog in a cash machine that Galdikas knew she could never match. Yet, like Pak Ahmed, she kept going back to the source that had served her so well, day after day, week after week, month after month.

That’s what she was doing when her phone rang.

“I remember it clearly,” she says. “This man says he’s calling from Shanghai, China, and he won’t stop talking, won’t let me get a word in edgewise, and then he asks me – and I’ll never forget this – he asks me if there’s a forest that needs to be saved.”

The man’s name was Todd Lemons, a serial entrepreneur from the United States who’d grown up listening to his grandfather’s tales of his adventures in the Amazon and reading National Geographic. It was on the magazine’s October, 1975 cover that he first encountered Galdikas. Although less than 30 years old when the photo was taken, she was already a rock star in the world of primatology, and she looked the part. Strikingly attractive, her gaze was brooding and world-weary and motherly all at once. A baby orangutan clung to her neck, and an adolescent lolled playfully in front of her. Both were orphans, and both had suffered the trauma of seeing their mothers murdered before their eyes.

She was one of three researchers known then as the “Trimates”, the others being Jane Goodall and Dian Fossey. The name came from their mentor, Louis Leakey, who had helped Galdikas launch the operation that would become OFI. Over the decades, she had rescued and rehabilitated thousands of orphaned orangutans, and in 2001 she asked for permission to expand into the Seruyan Forest.

Her application, however, disappeared into the local bureaucracy, and a few years later she learned that PT Best, working through subsidiaries, had gotten concessions to convert the entire forest into a palm-oil plantation. Now, with one hand on her steering wheel and the other holding her phone to her ear as she navigated Los Angeles traffic, she was fighting to save the forest from certain destruction.

“When Todd called, I thought it was like a deus ex machina – you know, like in the old Greek plays? When the writer got himself into a mess, he’d lower Zeus down in a machine, and he’d pop out and save the day,” she says. “But then he  started going on and on about how trees capture carbon and people would pay us to save the trees to stop global warming, and I thought to myself, Ã¢â‚¬ËœOh, a carbon cowboy.'”

Still, something kept her on the phone. Maybe it was his knowledge of forestry. Or maybe it was just curiosity on her part. Whatever it was, when they hung up, she’d pegged him as sincere and knowlegeable about the timber trade –  but naí¯ve about the rest of the world.

He called again about a week later, this time from his home in Hong Kong, and caught her on her way to Los Angeles International Airport.

“I was in a hurry,” she says. “So I told him that if he was serious, he’d have to come and visit me in in Pangkalan Bun.”

About a week after that, she heard a knock on her door. It was Lemons.

Next Week: Who is Todd Lemons?

We all use palm oil every day, and nearly half the worldÃ¢â‚¬â„¢s supply comes from Indonesia Ã¢â‚¬â€œ with devastating results for the countryÃ¢â‚¬â„¢s forests and the global climate. Fixing it is no easy matter, and in Palm Oil vs The Peatland Forest, we examine efforts underway to shift palm oil development from forests to degraded land Ã¢â‚¬â€œ an act that requires nothing short of a complete restructuring of IndonesiaÃ¢â‚¬â„¢s rural economy. We begin by speaking with Heru Prasetyo, the man charged with overseeing this massive land-swap. Then we go small Ã¢â‚¬â€œ and follow one conservation project in Borneo as it struggles to get off the ground, which brings us into the highest levels of Indonesian government and the challenges of creating sustainable supply chains in the face of global demand.

Part One: Can This Indonesian Official Execute The Largest Voluntary Land-Swap In History? We speak with Heru Prasetyo, the man charged with developing a national regulatory regime for Reducing greenhouse gas Emissions from Deforestation and forest Degradation, plus other changes in land-use (REDD+).

Part Two: The Primatologist And The Entrepreneur We learn how palm oil development threatens Borneo’s Seruyan Forest, and we meet the primatologist and the entrepreneur intent on saving it.

Part Four: Wrestling With Orangutans: The Genesis Of The Rimba-Raya REDD Project We listen in on the first face-to-face meeting between Birute Galdikas and Todd Lemons, and learn what drove them to form their historic partnership.

Part Five: Rimba Raya Takes Shape We follow Birute Galdikas as she navigates Indonesia’s political structures and Todd Lemons as he reaches out to businesses and scientists to lay the groundwork of what became the Rimba Raya REDD project. Meanwhile, we learn of steps that President Susilo Bambang Yudhoyono is taking to meet the challenge on the national level.

Part Six: The Challenge of Sustainable Palm Oil We examine the demand side of the equation and learn why past efforts to promote sustainable palm-oil development have failed. We then learn how current efforts differ from those of the past, and see how they dovetail with IndonesiaÃ¢â‚¬â„¢s efforts to execute the largest land-swap in history.

Part Seven: The Land Swap We conclude by wrapping up the various strings and seeing how they all converge in the governmentÃ¢â‚¬â„¢s REDD+ Agency. We take stock of the agencyÃ¢â‚¬â„¢s efforts to-date, and examine the challenges that lie ahead.