On Monday, regulators from California’s Air Resources Board discussed a proposed protocol that, if approved in September, would accept offsets from methane-reducing rice projects into the state’s cap-and-trade program. The American Carbon Registry just listed the first rice project – expected to reduce 1,400 cars worth of greenhouse gas emissions. 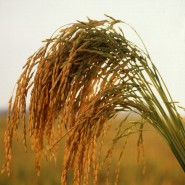 19 March 2014 | Part of the solution to the climate problem may lie within the 2.7 million acres of rice cultivated in the United States last year. Rice growing is the third largest source of methane emissions in the United States’ agricultural sector. When rice fields are flooded, the organic matter decomposing sans-oxygen below releases methane gas, a climate pollutant that has 21 times the strength of carbon dioxide.

A proposed protocol being considered by California’s Air Resources Board (ARB) – the regulatory agency that oversees the state’s cap-and-trade program – could offer incentives for farmers to reduce these emissions and monetize carbon offsets that could then be sold to companies capped under the law. Through the rice cultivation offset protocol, rice growers in California and the Mid-South could reduce methane emission reductions through small but important tweaks to their cultivation practices, such as dry seeding or draining the standing water from fields earlier than they otherwise would.

None of these methane-reducing rice cultivation practices are considered Ã¢â‚¬Ëœbusiness as usual.’ Paul Buttner of the California Rice Commission estimated that only 1-2% of farmers are currently doing dry seeding, mostly because of the inherent risk of moving away from established practices.

“The early drain practice is experimental, it’s viewed by most growers as too much of a risk,” said Buttner. “The most important thing to them is maintaining the quality of the rice. We do have studies showing that maybe they can drain those fields a little earlierÃ¢â‚¬Â¦but without a program, very few growers would expose themselves to that risk.”

The ARB estimates the methodology could produce between 500,000 and 3,000,000 tonnes of greenhouse gas reductions through 2020, the current end-date for California’s cap-and-trade program.

The protocol was developed based on standards tested in the voluntary carbon markets, those outside of California that are not motivated by regulation. The American Carbon Registry’s (ACR) rice protocol was released in May 2011, with the Climate Action Reserve following with its protocol in December 2011. To coincide with the ARB workshop, the ACR on Monday announced the expansion of its previously California-specific protocol to the Mid-South states. It also unveiled the first rice project listed on its registry, which aggregates rice growers over a 5,000-acre area in California’s Sutter, Colusa, and Glenn Counties to reduce the equivalent of 6,700 tonnes of carbon dioxide emissions (tCO2e).

If approved by an ARB vote in September, the offsets would be eligible for the state’s cap-and-trade program starting on January 1, 2015.

Read a more in-depth (read: wonky!) version of this story on the Forest Carbon Portal

Ã¢â‚¬Â¦ Our survey informing the 2014 State of the Voluntary Carbon Markets and State of the Forest Carbon Markets report is still open. If your organization transacted carbon offsets in 2013, or developed a forest or cookstove project, be sure to get us your data for the only market-wide, international report tracking voluntary offsetting. As always, your response is confidential.