Many rainforest nations depend on oilseed crops like soybeans and palm oil, but those same crops are among the leading drivers of deforestation. Governors from 13 states in rainforest nations have committed to forego that income and slash deforestation by 80% between now and 2020 – but they need credible REDD finance to get the job done. 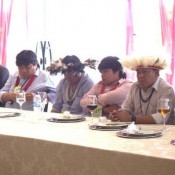 Thirteen of them on Monday launched the Rio Branco Declaration, which is a clear commitment to reduce deforestation in their states by 80% between now and 2020. That commitment, however, is contingent on developed countries delivering on their own promises to step up funding both market-based and non-market-based to engineer a shift to sustainable land-use practices built in part on support for indigenous agriculture.

The declaration was signed at the 8th Annual Meeting of the Governors’ Climate & Forests (GCF) Task Force here. The GCF is a collaboration among 22 states and provinces from Brazil, Indonesia, Mexico, Nigeria, Peru, Spain, and the United States. Three additional Mexican states Tabasco, Quintana Roo and Jalisco are expected to join this week. Governors from other GCF member states say they will also sign the declaration.

“GCF members come from different provinces and countries, but we have a common goal to protect forests and build sustainable environments for improved livelihoods for all both now and into the future, said Governor A. Teras Narang of the Indonesian state of Central Kalimantan. “That future is now.

Narang’s country, Indonesia, is attempting to halt deforestation by shifting palm-oil development from forested lands to degraded lands a daunting task akin to moving the farms of the US Midwest to the plains of Texas. It amounts to the largest voluntary land-swap in history, and the government aims to use REDD finance to achieve it, while also engaging the demand side of the equation by working with companies willing to re-engineer their supply chains to avoid deforestation.

“Only standing forests are capable of removing greenhouse gases such as CO2 from our atmosphere, helping to reduce global warming, said Governor Dr. Cornelis MH, a signatory to the declaration and Governor of the Indonesian state of West Kalimantan. “Performance-based incentives or assistance from donor countries to support REDD+ programs and low emissions development will not only rehabilitate forests but support livelihoods among forest-dependent communities€both small-holder farmers and indigenous communities.

Indigenous leaders, conservationists, and private-sector actors meet on the sidelines of the GCF meeting in Brazil.

Edwin Vasquez is the leader of one of those communities, the Huitoto People of Peru, and as Coordinator General of COICA (Coordinadora de las Organizaciones Indí­genas de la Cuenca Amazí³nica, Coordinator of Indigenous Organizations of the Amazon River Basin), he represents nearly 400 other indigenous communities across the entire Amazon Basin.

“Humanity is in grave danger over the destruction of the Amazonia the climate regulator of the planet, he said. “The 5,000 indigenous communities continue to protect the forests and preserve our cultures and the world, as we have done for thousands of years. We are the proprietors of 210 million hectares, covering 25% of the Amazon, which calls for an urgent proposal Indigenous Amazonia for Humanity, a $210 million project addressing the fact that climate funds have not reached our communities.

The declaration aims to put the GCF on the world stage, and it invites the international community and partner organizations to work with the GCF to develop clear and transparent mechanisms for securing and delivering performance-based benefits to forest-dependent communities, smallholders, and indigenous peoples.

“For the last 6 years the GCF has been the source of incredible innovation that is now ready for the world stage, said Dan Nepstad, Executive Director of Earth Innovation Institute. “If the GCF states and provinces decide in Rio Branco to reduce 80% of deforestation by 2020, this means 4 billion tons of avoided CO2 emissions on top of the 3 billion tons of emissions already avoided.

“For the 2020 commitment to become real, the GCF will need the support of companies, donors and investors, and a strong commitment to channel benefits to forest-based communities, said Nepstad. “All of the pieces are coming together for this to happen in the coming months.

On the buy-side, the US state of California is considering the inclusion of REDD offsets in its cap-and-trade program. The state played a leadership role in the early days of the GCF, and it remains a key driver.

“Without action to reduce emissions from the deforestation of tropical forests, we are missing one of the keys to mitigating climate change, said California Air Resources Board Chairman Mary Nichols. “We think the sector-based offset crediting approach being evaluated for jurisdiction-wide programs, like the one in Acre, is the next frontier for California’s carbon offset program.

Can This Indonesian Official Execute The Largest Voluntary Land-Swap In History?
Governors Move on Climate While Presidents Pother