Former US Vice President Al Gore and fellow Nobel laureate Wangari Maathai offered their views on avoided deforestation earlier this week. Gore said the time was right for avoided deforestation credits in cap-and-trade schemes, and Maathai supported the use of market-based solutions in principle – but stressed the need to link them with poverty reduction. 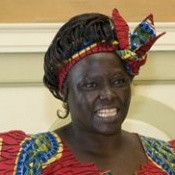 Former US Vice President Al Gore and fellow Nobel laureate Wangari Maathai offered their views on avoided deforestation earlier this week. Gore said the time was right for avoided deforestation credits in cap-and-trade schemes, and Maathai supported the use of market-based solutions in principle – but stressed the need to link them with poverty reduction.

Fourth in the Series REDD in the USA

24 September 2008 | Former US Vice President Al Gore, Republic of Guyana President Bharrat Jagdeo, and Nobel laureate Wangari Maathai joined on Monday with presidents from the world’s largest environmental and antipoverty organizations, executives from the private sector, and public sector regulators to encourage the US to take a global leadership role in combating the deforestation that contributes to global warming.

“December 2009,” the date scheduled for the upcoming international global warming treaty conference in Copenhagen, served as a rallying cry for the assembled group of 200 guests as they pushed to forge consensus on achieving their goal.

During a luncheon held at the Yale Club in New York City and later during a roundtable discussion, both sponsored by Avoided Deforestation Partners, participants expressed cordial, if at times discordant rationales for preserving rainforests. A draft “call to action” was circulated in an effort to get all NGOs on the same page and provide a focal point for future debate.

Gore, who won the 2007 Nobel Peace Prize for making climate change a front-page issue through his lectures and film, “An Inconvenient Truth,” used the luncheon to cut the discussion down to its fundamentals. Over the clinking of silver against white Rosenthal china, he noted that deforestation contributes 20 percent of annual greenhouse gas emissions, more than all the world’s cars, trucks, planes and ships combined. Scientists warn that if global warming is not reduced within the next two decades, it could prove disastrous to the environment and economy.

Using his hands for emphasis, Gore said that “similar to the…subprime mortgage crises, the assumption that we can continue putting carbon into the air will also crash.”

As Gore and environmental leaders pushed for tropical forest protection to combat climate change, Maathai, the luncheon’s other featured speaker who won the 2004 Nobel Peace Prize for founding the Green Belt Movement that plants trees for income in Kenya, emphasized her and her fellow anti-poverty leaders’ agenda. Their main concerns, she said, are famine and the fury hunger can spur. Clad in a traditional African smock dyed sun yellow and blue, Maathai described the vast destruction of indigenous people’s rainforest homes. Disappearing at a rate of an acre a second, rainforests could be obliterated entirely within the next few decades.

“Where will they move,” she asked, “when all of this becomes a desert?”

“Poor people don’t want to be forever poor; they want to eat,” he said. “The last thing on their minds is to save the world from climate change.”

The upcoming United Nations-backed Climate Change Conference in Copenhagen, he said, must include funding to preserve the forests his regime has until now protected.

From Then to Now

Gore played a major role negotiating the Kyoto Climate Agreement that was ratified by 37 industrialized countries in 1997 but never signed by the United States. That agreement spurred carbon trading between industry emitters and established the carbon trading businesses of many of the luncheons’ participants. Through regulations requiring emission reductions, the agreement prompted carbon-emitting industries such as power plants to purchase carbon offsets from businesses that could more economically reduce their emissions.

The 1997 agreement, however, did not allow industries the option of preserving or restoring rainforests as a way to offset their emissions. Gore said at the luncheon that the time is ripe to include rainforest preservation as another option within the cap and trade program for reducing overall carbon emissions.

Kyoto protocol signatory nations have been waiting to see whether the United States will assume a share of responsibility and a leadership role before banging out the upcoming treaty. But with less than six weeks left before the US presidential elections, time to influence party platforms is running short.

Former US Ambassador and conference participant Stu Eizenstat said that “we have to bring the same sense of urgency to this issue as we’re bringing to the financial crises.”

Taking the floor, Eizenstat ticked off common ground between the disparate assembly of environmentalists, investors and anti-poverty organizers. Scientifically, he said, it will be impossible to stabilize the composition of the atmosphere if the upcoming treaty again leaves out 20 percent of global emissions. Politically and economically, he continued, preserving tropical forests offers a low-cost way to reach emission-reduction goals. And developmentally, income must be channeled to the poor residing in rain forests to provide an incentive to not destroy them.

The Devil’s in the Details

Consensus and good will appeared to dominate the day’s discussions as participants nodded their heads in agreement. But getting major international players with distinctive end games to trust one another and work together places a high hurdle. The tricky subjects of leakage, permanence and additionality that form the fundamentals for ensuring that carbon trading actually reduces emissions were glossed over almost entirely during the meetings.

None-the-less, the group’s organizers urged that they work towards finding quick consensus. If successful, the conference’s unprecedented amalgamation of diverse leaders could broker the way for billions of dollars to be spent to protect rainforests, fight poverty and combat climate change.

“We have a real but fleeting opportunity,” Eizenstat said, “to fill the gap we left in Kyoto by putting forestry (in forefront.)”