Markets are supposed to be about cold, hard logic; but any salesman can tell you they are more often about scent, texture, heart, and soul.  A traveling exhibition of dead trees from the Ghanaian rainforest, on their way this month to Oxford, England, is helping people understand the majesty of these threatened giants – and, in the process, drumming up support for schemes that reduce greenhouse gas emissions by saving trees. 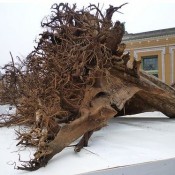 The Ghost Forest will be settled in Oxford from this coming July 9 to July 31, 2011.

Markets are supposed to be about cold, hard logic; but any salesman can tell you they are more often about scent, texture, heart, and soul. A traveling exhibition of dead trees from the Ghanaian rainforest, on their way this month to Oxford, England, is helping people understand the majesty of these threatened giants – and, in the process, drumming up support for schemes that reduce greenhouse gas emissions by saving trees.

1 July 2010 | Just outside the Parliament building in Copenhagen, children scrambled through the massive, maze-like roots of ten trees taken from the rainforest in Western Ghana. Women touched the mottled bark as men inhaled the forest scent.

It is hard to imagine that dead tree stumps could inspire such awe. Yet people walked away shaking their heads, somehow transformed, at least for the moment, witnesses to the haunting beauty of these felled gladiators.

This is the Ghost Forest, brainchild of Angela Palmer, an English exhibition artist who decided against all practical logic to transport these 300-plus-square-foot Goliaths out of the Suhuma forest reserve, across the Atlantic and through Europe.

Even dead, these roots from the Denya, the Danta, the Dahoma and the seven other rainforest trees still hold power as they stand sentinel outside the parliament building. Some credit this exhibition for helping resurrect the United Nations Climate Change Summit that took place inside the Parliament building last December from one that could be otherwise characterized as a total failure. Although the 11,000 delegates representing 192 nations debating inside could agree on almost nothing else, they jointly acknowledged for the first time that climate change can be conquered only if forest preservation plays a part. To make this happen, the nations pledged to make a significant financial and political commitment to REDD+, the United Nation’s Reducing Emissions from Deforestation and Forest Degradation (REDD) program that commits wealthy countries to pay for forest preservation in developing nations.

How the roots came to Copenhagen, where they go next and what this assortment of dead tree stumps could mean to climate negotiations is a chronicle of creativity, of whimsy and of downright determination.

Their story starts with a chance conversation at a dinner party in Oxford, England between Ms. Palmer and Andrew Mitchell, a leading authority on the effect that rainforests have on climate change.

Mitchell, Palmer recalled, spoke long and convincingly. He regaled her with images, telling her how these skyscrapers of the rainforest, some standing 20 stories tall, provide home to 40 percent of the all species in the world. They are the source for 25-percent of all plants used for medicines including cancer-fighting drugs. And scientists confirmed that deforestation, particularly in rainforests, allows the carbon that trees would otherwise inhale and store to instead be released into the atmosphere, causing 20 percent of the world’s greenhouse gas emissions.

But for now, the world seems to value only their wood, he told her. One and one-half acres of rainforests are felled each second, wiping out an area the size of England in a single year.

Palmer said she heard enough. By the end of the evening, she began concocting a plan. Since she could not bring her European neighbors to rainforests to convince them of their value, she would somehow would bring rainforests to her neighbors.

An artist, a mother of three and an award-winning journalist, Palmer is the prototype of the out-of-the-box thinker. With bright blue eyes and a blond bob, she has a history of coming up with wild ideas that unite environmental causes with art and jolt the public into viewing issues in a new way. Last year, for example, she brought the effects of pollution home by wearing identical white outfits first in a Chinese coal mining town considered the most polluted on Earth, and then in Cape Grim, a town on the coast of western Australia said to have the cleanest air. Next, she convinced London’s Royal College of Art to display the results.

So her goal of conveying rainforest trunks out of Africa and into Europe did not worry her nearly as much as, perhaps, it should have.

First, she had to jump diplomatic hurdles. She convinced the government of Ghana that she would make clear that although it lost 90-percent of its rainforest since 1960, in recent years it has actively tried to protect the rainforest. Unlike the majority of trees torn from rainforests, most of the ten tree stumps Palmer chose had fallen naturally during storms; the others had been subject to selective logging. Ghana outlawed the export of raw logs in 1994, although illegal logging remains a challenge. Ghana’s efforts at rainforest protection have been recognized by the World Bank that rewards countries with carbon credits from the West in return for preserving their forest cover, a precursor to REDD, and selected Ghana to receive these funds.

She also had to conquer ridiculous logistics. Videos of the trees’ journey show Angela, five foot-six inches tall, dwarfed by these mighty roots. She watches as workmen meticulously scrape and dust them to remove every drop of dirt to comply with export restrictions. They haul the cleaned roots on to individual low-loader trucks. And, like moose that clumsily turn their antlers to avoid forest brush, the trucks with their two-car-lane-wide possessions slowly make their way out of the forest. By the time they reach the docks, they have already dragged down over head cables and bashed into a taxi. All this before their ship ride across the Atlantic and before their trek along European highways where drivers in Fords and Toyotas drop their jaws in surprise.

Mitchell was waiting at Trafalgar Square in London, considered by many the epicenter of industrialization, when these dinosaurs of the forest finally arrived. As rain poured down, huge cranes lifted the gigantic tree stumps on to enormous pedestals. The wet sidewalks, he said, acted as a reflecting mirror that multiplied their number.

Above them stood Nelson’s Column, a 169-foot column – shorter than many of the trees before they were felled – that commemorates Admiral Horatio Nelson who died defending his nation at the decisive Battle of Trafalgar at the end of the Napoleonic Wars.

“As I looked at Nelson standing atop his column, the hero who saved our country from terrible destruction,” Mitchell says in his British accent tinged with irony, “I wondered as we were going next to Copenhagen – (with the tree stumps for the UN Climate Summit) – who would be our heroes now.”

Michael Jenkins, founding president of Forest Trends and publisher of Ecosystem Marketplace, said he wondered the same thing. He was in the Danish capital for two weeks last December to observe the long-awaited UN Climate Conference negotiations – and the tree stumps.

As the world now knows, participants at the long-anticipated conference failed to agree on even the minimum expectation of the meeting: to set a deadline to negotiate a binding international climate change treaty.

Everything about the meeting was gloomy, Jenkins recalls.

“There was rain, sleet, cold, grey and only four hours of sunlight in late December,” he said. “Thirty-thousand people were running around, depressed.”

The dreariness lifted, he said, when he walked outside and saw the trees. The shape, the scent and the feel of the trunks, he said, “brought me back in a clear way to what the negotiations were all about. They changed my whole outlook.”

Most participants credit long and effective negotiations for the Copenhagen Accord’s single achievement, the immediate establishment of a REDD-plus mechanism that includes a $3.5 billion short-term financial commitment to fund the effort from Australia, Britain. France, Japan, Norway and the United States. Many credit the tree installation for helping drive the momentum.

This momentum, however, still needs a push. The Accord mentions no specific timeline or target. Since Copenhagen, fast-paced negotiations have begun to bring interim finances to invest in forests to reduce carbon emissions. In the meantime, rainforest preservation continues to be left largely to voluntary efforts and markets. To offset the carbon expelled by her travel to Ghana, for example, Palmer purchased credits from ClimateCare, a voluntary climate-offset provider based in Palmer’s hometown of Oxford. The credits paid to produce and distribute fuel-efficient cook stoves to Ghanaian families to replace the charcoal pots that require massive amounts of wood and contribute to rainforest destruction.

Year of the Forests (Living or Dead)

Meanwhile, the massive tree stumps forming Palmer’s Ghost Forest continue their odd yet impressive trek across Europe. Not to be outdone by the curiosity of appearing at Trafalgar Square and before the Copenhagen parliament, Palmer plans to next exhibit in July an installation at Oxford University in front of some of the greatest minds of the world. They will be installed, she said, on the lawn of the university’s Museum of Natural History and the Pitt Rivers Museum as part of the celebration of the Museum’s 150th anniversary and the UN’s International Year of Biodiversity.

Where she will go next with her traveling embassy, her ambassadors of the rainforest, she said she has not yet been decided. Although the year 2011 is the UN’s International Year of Forests, she said that “Ghost Forest raises awareness that if we do not take action, it – dead tree stumps – is the only forest we will have.”


Alice Kenny is a prize-winning science writer and a regular contributor to Ecosystem Marketplace. She may be reached at [email protected]

PES in West Africa: An Online Resource for Students and Practitioners
Climate Change and Forestry: a REDD Primer