Forest carbon projects are only as good as the legal system in which they reside.  Even voluntary carbon projects can only be implemented in a system where tenure is clear and laws are enforced. Typically, however, tenure and uncertain legal context present significant stumbling blocks. A new Forest Trends report examines the state of REDD in Ghana’s legal apparatus. 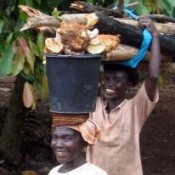 31 October 2011 | Africa is home to one of the world’s largest forest basins and should, by all rights, be a hotbed of forest carbon activity, yet   Ecosystem Marketplace’s 2011 State of the Forest Carbon Markets report documented only a sliver of last year’s record   volume coming from Africa.

Several countries are working to fix that, and of the most advanced is Ghana, which has been admitted to participate in the REDD+ Readiness Preparation processes of the World Bank’s Forest Carbon Partnership Facility (FCPF) and has several affiliations with other forest governance initiatives that give it a head start as far as forest governance and REDD are concerned.   It also just wrapped up a three-year effort to document and map all of its biomass – an accomplishment that could support REDD readiness across the continent.

To truly take advantage of REDD, however, Ghana must shore up aspects of its legal and policy framework, and that means answering questions such as how forest carbon rights and benefits are allocated under the current regulatory framework. These issues are as essential to address as what future legal and policy changes are needed for REDD and REDD+ projects to be implemented and thrive.

A new report commissioned by the Katoomba Group and Forest Trends (publisher of Ecosystem Marketplace) and authored by Nigerian law firm The Rock and Partners, in collaboration with legal consultants in Ghana and the Nature Conservation Research Centre (NCRC), attempts to untangle this complicated web of uncertainties about carbon rights and benefits as well as their implications in Ghana. It does so by closely examining not only the statutes on the books, but also by reading past judicial decisions on forest and natural resources issues – a necessity since Ghana is a common law country.

Who Owns the Carbon in the Trees?

Forest carbon rights in Ghana, as elsewhere, are complicated by the fact that no laws specifically apply to carbon captured in trees. So, to figure out what the laws are that regulate forest carbon, one has to draw inferences from related laws and norms related to land, forests, and natural resources, among others. But even this inquiry is far from straightforward in the case of Ghana.

As far as land rights are concerned, the country has a dual system of land ownership and control, where some land is held collectively under customary law (which can take a number of forms), and other areas are publicly owned and regulated by statute. The overlap of statutory and customary law creates confusion and conflict in some areas, while at the same time leaving geographic and regulatory gaps.

Legal requirements around ownership also create perverse incentives for deforestation. For example, in areas subject to customary law, unoccupied land is considered to belong to the nearest community. Unfortunately, to claim unoccupied forest, the community has to clear trees or cultivate the land. In addition, according to law, all naturally occurring trees belong to the state, which in turn can grant timber concessions to companies and private individuals. As a consequence, a landowner may be subject to having concession-holders come in to remove naturally occurring trees. And even though timber concessionaires are legally liable to landowners if they damage the land, crops, or other property, farmers have an incentive to illicitly remove naturally-occurring saplings to avoid this possibility.

Getting rid of perverse incentives in the law is one priority area for legal and policy reform around REDD. Another key part of the puzzle is specifically addressing how forest carbon will be treated under the law.

In theory, tradable credits for emissions reductions or removals can be created via activities that either (1) prevent carbon emissions that would have occurred via deforestation or forest degradation or (2) cause more carbon to be stored in soil or plant biomass, e.g., via improved forest management or tree-planting. Given the existing legal framework in Ghana, such credits might be treated in a number of ways.

Carbon might be seen as a natural resource, like minerals, ownership of which is vested in Ghana’s government, in trust for the people. Under this interpretation, the people actually responsible for day-to-day land uses and land-use changes would have very limited access to REDD+ incentives, which would be controlled entirely by the state. It would be important for the state in such circumstances to provide for robust benefit-sharing with individual and community land managers to make sure their incentives align with REDD+ and benefits are shared equitably.

Alternatively, since in Ghana rights in trees are separate from rights in land, forest carbon benefits might be part of the rights that exist in trees. In this case, ownership would depend on where the trees are and whether they are planted or naturally-occurring. Generally speaking, carbon credits from all naturally occurring trees and planted trees in forest reserves would belong to the state. Carbon credits from planted trees outside of forest reserves would belong to the planter or owner of the land, as applicable. In general, this arrangement would limit direct participation in REDD+ to projects that involve reforestation, agroforestry, sustainable plantation management, and other REDD+ modalities that include tree-planting; it would largely exclude people from doing projects that are based on avoiding the loss or degradation of existing forests (generally, naturally occurring trees that belong to the state), which is at the heart of REDD+.

There is also the possibility that forest carbon credits might be considered to belong to the landowner on the reasoning that they are inherently tied to the land itself. This last scenario would be the most favorable one for REDD+ projects as it could provide key stakeholders – land users and managers – with direct economic incentives for preserving forests. However, it also is likely to face political difficulties as it does not necessarily include a major role for the government.

And of course, there is the possibility that a wholly unique regulatory framework will be created, with consequences that are difficult to anticipate.

New Laws for a New Concept

In order for the government to maintain ultimate regulatory responsibility, and at the same time for individuals and communities to be able to receive a major share of the incentives for forest conservation and restoration, collaborative approaches are needed.   The 1994 Forest and Wildlife Policy Act is a good first step but provides only the framework   without specific structures or processes for implementation.

One potential land-use arrangement that has been discussed as a possible model for expanded collaborative resource management and use on the ground is the Community Resource Management Areas, or CREMA. A CREMA is a geographically defined area with “one or more communities that have agreed to manage resources in a sustainable manner” and where the government actually transfers management authority to communities or community-based organizations. On the plus side, CREMAs’ objectives are very much in sync with those of REDD+.

At this point, however, CREMAs are not legally recognized entities and therefore do not by themselves provide the legal certainty needed to support REDD+ projects. In order for this to happen, a CREMA must be organized into a different entity, such as a company or fiduciary trust, so that its members can sue and be sued, providing legal certainty and recourse for participants –and potential buyers – in a REDD+ project.

However, there is a chance that new legislation, which is currently under consideration, will recognize CREMAs as legally independent entities, which would eliminate this problem.

All in all, this new report raises more questions than it provides answers – but in doing so, it paves the way, or rather points to ways that must be paved, for REDD+ projects to thrive in Ghana.