Former US Secretary of State George Shultz has long been a lonely (but not lone) proponent of climate action within the Republican Party. Bill Shireman of Future 500 says that Shultz’s proposal could win support among young Republicans, leading to a climate solution that the right and left can both agree on. 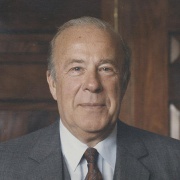 Former US Secretary of State George Shultz has long been a lonely (but not lone) proponent of climate action within the Republican Party. Bill Shireman of Future 500 says that Shultz’s proposal could win support among young Republicans, leading to a climate solution that the right and left can both agree on.

14 October 2013 | Former Secretary of State George Shultz proposed that the U.S. adopt a “Climate Insurance Policy” to simultaneously bolster the economy and reduce the risk of global warming.

In a recent interview with reporters, Shultz suggested that Republican leaders follow a Reagan-era strategy that would drive innovation while also cutting carbon emissions.

Shultz’s approach would also deliver a political benefit to the Republican Party, which is struggling to redefine itself after losing two national elections to Democrats, and failing to capture a majority in the Senate, as most analysts had expected.

His plan would emulate the GOP’s leadership on ozone protection during the Ronald Reagan administration, which resulted in a “no regrets” approach that was beneficial to the economy, whether or not ozone science was borne out.

“There were ozone skeptics back then, just as there are climate skeptics now,” said Shultz. “But we all agreed that, if what some scientists feared were to happen, it would be disastrous. So we took out an insurance policy.” The Montreal Protocol quickly led to innovations that vastly reduced ozone depleting substances. “In retrospect, the non-skeptics turned out to be right, and the Montreal Protocol came around just in time.”

On climate, Shultz’s policy preference combines sound policy with deft political strategy. It would tend to reduce federal tax and spending levels over time, by shifting taxes from forms of prosperity that tend to go up, to forms of pollution that tend to go down.

Tax cuts or dividends would reduce taxes on income, profits, savings, or payroll under the proposal. The difference would be made up by a price on carbon or other pollutants. While the switch would start off revenue neutral, shifting taxes to pollution would lead to gradual reductions over time.

Carbon emission rates generally decline about 1% each year. A tax shift to carbon would drive an average annual tax cut of at least that amount, reversing historic trends.

The tax swap is supported by conservative economists, including Greg Mankiw of Harvard, Kevin Hassett of American Enterprise Institute, Luigi Zingales of the University of Chicago, and Arthur Laffer, father of the supply side economic theories associated with President Reagan.

Retailers and consumer product companies would also benefit. This puts more money in the pockets of WalMart moms. Prices for energy would go up just as much, but consumers could choose whether to use their dividends to buy the same amount of energy, and come out even, or shift their spending elsewhere, and save.

Economically, many economists believe the shift would help increase jobs, income, technology and innovation. It would smooth the transition toward natural gas and renewables, and away from coal. The dividend approach would also enable a higher share of tax cuts to go to coal states, where that sector’s decline has been steady.

Despite its economic and environmental benefits, selling a tax swap in the GOP won’t be easy. Carbon, unfortunately, has become an ideological litmus test on both the left and right. The hard left uses it to advocate economy-wide regulation – and the hard right resists the science because they fear the regulations the hard left thinks are needed.

The problem is, with no alternatives proposed, the regulatory approach is the only option offered.

Some GOP strategists argue that by offering a market-based solution on the climate issue, the party would lose a wedge issue that can mobilize the base against the Democrats. But as a lifelong Republican, I disagree. This is a one-time opportunity to achieve a long-term GOP priority: to drive taxes down and growth up. Why would we not take that?

More attractive than a carbon-focused approach might be a pollution tax shift that covers a “market basket” of contaminants, rather than just carbon. Unlike other taxes, pollution taxes are supported by a plurality of GOP voters.

According to Shultz, even if some GOP lawmakers remained skeptical, the party would seize the issue from Democrats, and regain its historical conservation leadership. “All of the most important federal environmental actions were taken by Republican presidents,” Shultz said.

The new GOP approach would appeal to young voters, including conservatives, who reject the idea that to grow the economy you have to damage the environment. This is not the coal age. This is three generations into the information economy. Environmental protection is fully compatible with economic growth. It’s expected – it’s assumed.

Yet in terms of urgency, the economy needs help right now. People need jobs to put food on the table today. They need the environment to live for the long term. So 45% want political leaders focused on the economy as their top priority, while only 8% want them focused first on climate change, according to polls by the Conservative Republican National Committee (CRNC).

Republican climate “skeptics” use that data to argue that young voters don’t care much about the environment. Yet a majority of young conservatives under age 35 – some 30% of whom doubt climate change is real – still favor action on climate. They are simply not convinced government action will work.

But if nothing else is on the table, they favor government action. About 80% of voters under 35 support “President Obama’s climate change plan” – even though most have no idea what’s in that plan. But they favor action. If the GOP doesn’t offer an action plan, they won’t expend a lot of effort to figure out a better approach – they will take what’s on the table that the Democrats set.

The failure of the GOP so far to offer a climate policy of its own makes a big government approach a self-fulfilling prophecy. GOP leaders rightly worry that a Democrat-led climate policy will lead to more regulations, higher costs, and higher taxes. Strategic Republicans could seize the high ground on the issue, and offer a no-regrets alternative that’s good for the economy and provides insurance against the risk of climate change.

Bill Shireman is the coauthor of the upcoming book “Engaging Outraged Stakeholders: How-to Guide for Uniting the Left, Right, Capitalists, and Activists” and president and CEO of the Future 500. He is also coauthor of the book “What We Learned in the Rainforest: Business Lessons from Nature.”