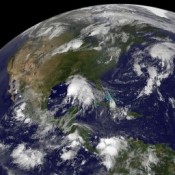 Note: The views are those of CIFOR and not necessarily those of Ecosystem Marketplace, Forest Trends, or its affiliates.

13 December 2012 | Forests have been front-and-centre at climate negotiations for several years. This year, at the COP18 meeting in Doha, Qatar, Forest Day 6 raised their profile even further, by focusing on the broader role of forests in landscapes as a whole and by connecting with the agriculture sector to deliver a more integrated approach to landscapes at COP19 next year.

From a scientific perspective, Forest Day 6 thus offered an excellent opportunity to explore the role of landscapes in the functioning of the Earth System, and to discuss why resilient, well-functioning landscapes are so important, not just for the global environment, but also for livelihoods and a whole range of other benefits.

From Carbon to Ecosystem Services

The importance of forests themselves was certainly not forgotten in the transition to landscapes as a major theme at Forest Day 6, as forested landscapes remain one of the most critical in providing ecosystem services to support human societies and in contributing to the functioning of the Earth System as a whole.

Forests obviously supply products like timber and paper that have long been valued by human societies, and more recently they have become valuable – and increasingly commoditised – for their ability to take up carbon dioxide from the atmosphere and store it for long periods of time.

But a landscape approach reminds us of many other ecosystem services that forests provide. In addition to their role in the carbon cycle, forests are important for other element cycles, such as nitrogen and phosphorus, by storing, modifying and transporting these substances through landscapes.

Much of the water that we need for drinking and cleaning, manufacturing and irrigation comes from forested catchments, which play a crucial role in natural water purification. In fact, the city of New York opted to pay landowners in their upstate catchments for improved management of their landscapes instead of building an expensive water treatment plant. The result was cheaper, cleaner drinking water for New York City residents as well as a new income stream and more resilient landscapes for upstate inhabitants.

Forests have long been a source of inspiration and recreation for many people around the world, and many societies have protected and maintained this ecosystem service in a number of ways, from national parks to sacred forests.

Recently the global change research community has proposed the concept of “planetary boundaries” as a way to recognize the intrinsic characteristics of the Earth System that define a safe operating space for humanity. In other words, there are hard-wired thresholds in many global environmental processes that, if transgressed, would cause changes damaging to human well-being.

The research identified nine such planetary boundaries, with climate change being the most well-known of them. But land system change is also one of the nine, with the conversion of forests to cropland being perhaps the most prominent land system change of concern. Thus, the forests-agriculture connection pops up also in Earth System science.

In short, meeting global environmental objectives through a framework like the planetary boundaries could actually work towards improving livelihoods at local and regional levels, not work against them.

The SDGs, a new challenge arising from the Rio+20 Conference, aim to provide a broad global framework, encompassing the developing and wealthy countries alike, that will integrate development with environmental concerns at the global level.

The three pillars of sustainability – economy, society, environment – are often invoked as the appropriate framework within which to develop SDGs, with the implicit assumption that these three pillars can be traded off against one another.

A more appropriate framework, however, does not treat these three components of sustainability as an equally weighted set of three pillars that can be traded off, but rather as a nested hierarchy. Environment is the all-encompassing, most important component as without a well-functioning environment at the global level, humanity cannot thrive. To be convinced that this is so, instead of “environment”, think “life support system”.

The planetary boundaries framework can offer a simple but powerful approach to the environmental (life support system) component of the SDGs. But nine boundaries are perhaps too many if a succinct set of SDGs, also encompassing and enhancing the MDGs, are desired.

Here we propose that two of the planetary boundaries – climate and biodiversity – may provide a minimum set that, if implemented, many entrain many of the other boundaries with them.

The climate system reflects the fundamental energy balance at the Earth’s surface. A rapidly changing climate, with much less predictability, more extreme weather events, and possible abrupt changes to major climatic features, will make sustainability virtually impossible to achieve, and, in a worst case scenario, could lead to a collapse of contemporary civilization.

In terms of sustainability, it’s clear from an analysis of the challenges ahead at local, national and global levels that we need to change our approach in two important ways. Using landscapes an organizing concept for land systems reinforces this imperative.

First, we need to look for synergies in simultaneously meeting social, environmental and economic goals, and, so far as possible, avoid trade-offs with winner and losers.

Second, we need to abandon viewing landscapes, and the Earth as a whole, as a set of resources to be “used” or “developed”, and instead become active stewards of living landscapes and a living planet so that we can maintain a well-functioning life support system and the many services that it provides for our well-being.