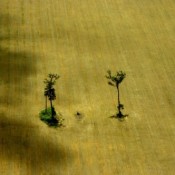 31 December 2012 BOGOR Indonesia | Making informed decisions on how to reduce carbon emissions from forestry and agriculture requires some solid knowledge about potential tradeoffs between development and conservation objectives: what you manage to win through avoided deforestation or reduced cropping emissions has to be weighed against possible farm income losses when first-best farming strategies have to be sacrificed.

Forest conservation climate mitigation strategies typically involve creating areas where trees are protected. Activities in these areas, such as crop expansion or logging, are restricted or prohibited, so trees are left standing.

Making sure there are trees in the landscape is a definite game changer when it comes to assessing the costs and benefits of different types of land-use strategies for reducing emissions and mitigating climate change. On a per-hectare basis, preserving threatened Amazonian forests provides an exceptionally high mitigation benefit according to a recent CIFOR study.

However, this does not mean that agriculture has no mitigation potential.

Low-cost technological alternatives to conventional agriculture and extensive cattle ranching do exist in the Amazon. For instance, no-till farming, a way of growing crops without mechanically overturning the soil is a now widespread alternative to conventional farming. No-till farming can help maintaining soil fertility and reduce greenhouse gas emissions from biological processes in agricultural soils.

However, while avoiding deforestation and conserving forests can result in substantial emissions reduction, such benefits must be weighed against the possible economic losses of sacrificing income from agriculture. Finding the optimal tradeoff of conserving forests versus developing land for agriculture will therefore be instrumental in ensuring the best use of scarce resources.

Yet, adopting new technologies often requires new skill sets, and improved access to credit or markets, and may expose farmers to risks. That is unattractive for many Amazon smallholders, and explains why they are often hesitant to adopt these techniques, even if research suggests that the profits, on average, are increasing.

There are several criteria we considered when looking to invest in different climate mitigation options.

First, the potential for emissions reduction should be high. Second, the risks of economic failure to the land user should preferably be low. Third, implementing the option should be cheap. And finally, any negative knock-on effects have to be contained.

In practice, none of the available options for mitigating climate change scores highly on all four features. A compromise has to be struck that takes into account the pros and cons of both forestry and agriculture to achieve an integrated reduction in emissions from land use, land-use change and forestry (LULUCF).

This can only be achieved if land-use mitigation strategies take into account the different local environmental, social and political contexts. The aforementioned study has shown how different factors can hamper forest conservation and agriculture mitigation efforts, respectively, reducing the kind of benefits that can be achieved.

For instance, while forest-based mitigation strategies can be implemented more easily than getting farmers to adopt new farming practices, in some contexts poor governance and conflicting claims over land as a result of unclear tenure can reduce the effectiveness of forest conservation in lowering carbon emissions. Here, agricultural reforms could eventually be more interesting.

When choosing between forest conservation and agriculture, the hidden costs associated with forest conservation must be weighed against the potentially high operational and transaction costs of promoting agricultural change through extension programs and infrastructure investments, at often relatively low mitigation benefits per unit of land.

Moreover, promoting agricultural change bears the risk of undesired “spillover effects” such as crop or pasture expansion into forest areas, thus neutralizing the potential mitigation benefits from adopting such technologies.

CIFOR’s and others’ research on deforestation, REDD, and agricultural technologies has shown that these side effects are not only possible, but probable – and thus, at the very least, need to be accounted for. Our scoping attempt reconfirms the prime mitigation potential of trees and forests, but also recommends a fine-tuning of parallel strategies for Amazon frontier forests and established agricultural regions.

This new publication is part of the CGIAR research program on Forests, Trees and Agroforestry.