The price of forest carbon credits doubled in 2011, leading to a record market value of $237 million as more country programs embraced mechanisms that use carbon finance to plant or replenish endangered forests, according to the latest "State of Forest Carbon Markets" report, which  which aggregates data from 451 individual forest carbon projects around the world. 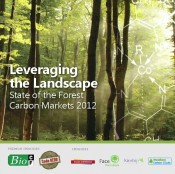 2 November 2012 | Washington, D.C. | The price of forest carbon credits doubled in 2011, leading to a record market value of $237 million according to the latest Ecosystem Marketplace survey of forest carbon markets, Leveraging the Landscape: State of the Forest Carbon Markets 2012, released this morning.

The report examines a variety of strategies for injecting financial resources into projects that save or plant forests that capture carbon. Carbon offsets from these projects averaged $9.2 per tonne of sequestered carbon in 2011, up from $5.5 per tonne in 2010.

Private-sector institutions seeking to offset emissions continue to be the dominant source of demand.

“Many companies choose forest-carbon offsets because the projects are tangible and often support benefits beyond carbon sequestration, such as biodiversity,” says Katherine Hamilton, Ecosystem Marketplace Managing Director. “At the same time, we’re seeing some of the innovation developed in this voluntary marketplace feed into compliance programs.”

That is reflected in the sharp increase in the number of governments in locations like California, Australia, and Canada that included forests in national or regional emissions-reduction programs, but the report also documents a surge in transactions of credits developed under the United Nation’s Clean Development Mechanism – reflecting the growing diversity of the marketplace.

The report found 18 million hectares impacted by carbon finance in 40 countries. The majority of projects were on private land but increasingly involved communities and smallholder landholders.

“To address the drivers of deforestation, we need to establish innovative ways of enabling forest conservation,” says Michael Jenkins, Forest Trends President. “As this type of investment gains increasing attention, transparency and access to information are critical for empowering the range of stakeholders and facilitating effective investments in reducing greenhouse gases.”