Companies that rescue and restore forests to earn money by capturing carbon in trees likely expanded their operations in 2009, despite the global recession and regulatory uncertainty, capping three years of accelerating growth, according to the first-ever global survey of emerging markets in forest carbon. 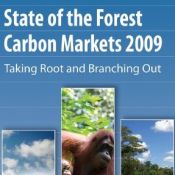 Companies that rescue and restore forests to earn money by capturing carbon in trees likely expanded their operations in 2009, despite the global recession and regulatory uncertainty, capping three years of accelerating growth, according to the first-ever global survey of emerging markets in forest carbon.

13 January 2010 | The Copenhagen Accord may have disappointed many of us, but it also yielded agreement on the need to develop financing mechanisms for reducing greenhouse gas emissions from deforestation and forest degradation (REDD). For REDD to work, however, investors will have to be on board – and for that to happen, the forestry markets will have to become more transparent and trustworthy.

To promote that transparency and trustworthiness, Ecosystem Marketplace spent the past year speaking with more than 100 market participants – 65 of whom develop forest protection and restoration projects, primarily in rainforest nations, and 37 of whom act as intermediaries. These participants accounted for 230 projects generating credits across 40 countries over the past 20 years.

The result is State of the Forest Carbon Markets 2009: Taking Root & Branching Out, which is being released today with support from the World Bank BioCarbon Fund, Biological Capital, Ecosystem Restoration Associates, and Baker McKenzie, as well as funding from the United States Agency for International Development (USAID), the David and Lucile Packard Foundation, the Norwegian Agency for Development Cooperation, the United Kingdom’s Department for International Development and the Surdna Foundation

Respondents documented the impact of carbon finance on more than two million hectares of forests over the past 20 years. That impact has resulted in the capture of nearly 70 million tonnes of carbon (MtCO2) in trees – although the bulk of this can be attributed to one massive project in the early 1990s that captured 47 MtCO2.

The findings also indicate substantial shifts in growth patterns over the past three years, during which these markets have matured substantially.

From 2007 through the first half of 2009 alone, forest carbon markets have funneled roughly $100 million into forestry conservation projects around the world, transacting 20.8 million MtCO2 in the process. In dollar terms, this period represents 67% of the market value of all forest carbon offsets, due to higher volumes and prices associated with emerging interest in the voluntary carbon markets overall, along with maturing standards and infrastructure.

During this same period, the dominant source of forest carbon credits in the developing world appears to have shifted from Latin America to Africa, although globally North America appears to have been the top region for sourcing carbon credits in 2008, generating 42% of the volume transacted that year, followed by Africa and Latin America with 26% and 21% respectively.

The survey results signal robust and growing belief in the ability of ecosystem markets to help reverse climate change. These findings were compiled before the December Copenhagen Accord, which explicitly stated the need to develop mechanisms that will reward sustainable land-use practices that capture carbon in trees.

Prices on the Rise

Overall, prices for forest carbon credits ranged from $0.65/ tCO2 to more than $50/ tCO2. Over time, the volume-weighted average price was $7.88/ tCO2. The compliance markets have commanded the highest prices overall, with a volume-weighted price average of $10.24/ tCO2 over time, followed by the voluntary OTC market at $8.44/ tCO2 and the CCX at $3.03/ tCO2.

In 2008, the voluntary OTC market took the lead at $7.12/ tCO2, but was surpassed in June, 2009, by the compliance market, which had reached the highest volume-weighted price average across markets and over time at $12.31/ tCO2.

OTC projects made up 90% of the total number of projects, with an additional 6% under the Chicago Climate Exchange (CCX). Only 4% of projects transacting credits (including ex-ante sales) were from regulated markets; half of these were from NSW GGAS and half from Kyoto-related afforestation/reforestation projects. The total historical market value tracked through the first half of 2009 was $149.2 million, of which $137.6 million arose from the voluntary market and $11.6 million from the regulated market.

State of the Forest Carbon Markets 2009: Download the full report, executive summary, or podcast of the launch here