Subnational forestry pilot projects in several countries have demonstrated early success in implementing REDD, namely by securing the participation of local communities. However, these efforts are being threatened by the ongoing debate at the national and international levels on REDD+ policy and finance, which could force some promising projects to abandon the climate finance path if these issues remain unresolved. 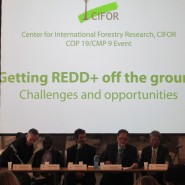 Subnational forestry pilot projects in several countries have demonstrated early success in implementing REDD, namely by securing the participation of local communities. However, these efforts are being threatened by the ongoing debate at the national and international levels on REDD+ policy and finance, which could force some promising projects to abandon the climate finance path if these issues remain unresolved.

26 November 2013 | WARSAW | Charles Meschak, Executive Director, Tanzania Forest Conservation Group, says the local communities he works with have done their part to conserve and restore the biodiversity of the country’s forests. Now, he says, it’s time for policymakers to follow suit.

“Communities have demonstrated their ability and willingness to reduce emissions from deforestation and forest degradation,” he said at a COP19 side event sponsored by the Center for International Forestry Research (CIFOR). “It is now time for the international community to demonstrate their willingness to pay for REDD by paying communities who reduce emissions at a price that fairly reflects the opportunity costs and the transaction costs of not converting forests to other land uses.”

Since September 2009, the NGO has been working on a 5-year pilot project financed by the government of Norway that covers nearly 175,000 hectares. The project has focused on demonstrating interventions that can be made at the local level to reduce emissions via a model that directs equitable incentives to communities to conserve and manage the forests sustainably, he said.

While mixed signals from the global community are worrying him on the demand front, he says the pilot also identified several domestic challenges that need to be overcome – from conflicting national policies on REDD and agriculture to the need to clarify land, forest and carbon tenure.

“Ethics has overall fairly little to do with why proponents are taking tenure so seriously,” said William Sunderlin, Leader of Module 2 (Sub-National Initiatives) of the Global Comparative Study on REDD+ being conducted by CIFOR. “It has a lot to do with business. If the aim is ultimately to depend on the market and if you can only have this performance-based system work if you identify the legitimate right holders and responsibility bearers for keeping forests standing, then it makes total sense that this is a priority.”

Beyond the REDD+ readiness phase, communities need to receive sufficient financial benefits to incent behaviors that do not result in deforestation, such as production of cacao, which communities will engage in if they pay more than REDD, Meschak said. “The price of carbon on the voluntary market is too low for this to make rational economic sense for communities,” he said.

The CIFOR study ranked REDD+ economic policy and the disadvantageous economics of REDD+ as the second biggest challenge for these projects, with the uncertainty at the national and international levels on REDD finance complicating efforts to move these projects forward. “We are not sure after REDD readiness where the funding will be coming from,” Meschak said.

Meeting the monitoring, reporting and verification (MRV) requirements under the Verified Carbon Standard was expensive, time consuming and required skill sets not readily available in Tanzania. The NGO overcame this challenge in part by involving the local communities in the MRV process, sending its staff to receive training at the national level on a methodology to do carbon mapping and coming back to teach communities on the ground how to measure carbon.

“The learning curve was high and it has taken a long time, but it was worth it for us to understand all these processes,” he said.

The project proponents also adopted a participatory approach to planning, implementation and remaining committed to FPIC, recognizing that it is a continuous process, Meschak said. “This is quite important,” he said. “It’s not just one event. That has to continue.”

In Indonesia, the Berau REDD+ project aims to put 800,000 hectares of forested land under effective management and reduce up to 10 million tonnes of carbon dioxide emissions by 2015, as well as conserve critical watersheds and preserve the habitat for 1,500 orangutans and other biodiversity.

But the project faces numerous pressures, including threats from large-scale plantations, mining and large-scale timber harvest. In addition, challenges exist such as the issuance of licenses that could lead to deforestation, an inconsistent commitment to the project by the district government, driven by the lack of financial incentives, and limited cooperation between the few donors that support the project and the implementers. Some of these challenges can be addressed by implementing a memorandum of understanding between the central, provincial and district governments that brings additional transparency to the issuing of licenses and creating appropriate performance-based incentives for the district to support low-carbon development.

Wahjudi Wardojo, Senior Advisor for Conservation Policy, the Nature Conservancy, Indonesia Program, said the project’s proponents are applying a “no-regrets” policy. “If we better manage the forests, we can get more and more, not just for forests, but also for local communities.”

Moving away from REDD?

The concerns Meschak expressed about the state of national and international REDD discussions on policy and finance issues are shared by his counterparts. When asked about the chances that they will continue to operate as a REDD entity by 2015, nine respondents to the CIFOR study said the chances were better than 90% while six pegged the chances at somewhere between 50-70% and three said there was no chance at all, Sunderlin said.

“It’s clear from this study that subnational REDD is in a very difficult situation right now,” he said. “Dominating the challenges are policy and economic conditions that inhibit the movement toward the essence of what REDD was meant to be when it came into being, namely a system of performance-based incentives. Regrettably, we have some evidence of some subnational initiatives turning away from REDD.”

Sunderlin called it “troublesome” that many of the REDD projects in the study are aiming for the voluntary market, giving the volatility of the market and the oversupply that has pressured prices in recent years.

“The forest carbon voluntary market, in spite of the fact that it has been growing unevenly in recent years and is currently on an upward swing, is infinitesimally small against the donor funding stream, partly because of this turn toward a jurisdictional approach and a shift recently of public sector funding in that direction,” he said. “Some of the projects are suffering even more because this funding that has been there for readiness is less available now because more of that is going to the jurisdictional approach.”

When asked what international policy changes are needed for these REDD projects to fulfill their objectives, the CIFOR study uncovered an almost wholesale focus on economics and funding and the need for interim pre-compliance arrangements in the run-up to 2020 to make up for deficiencies of the voluntary market.

“We are in desperate need of a fix for the REDD financial situation,” Sunderlin said. “Implicit in the negotiations has been that this ultimately needs to be a compliance market and yet we are years away from that. I feel it is urgently necessary that something happen in the near term and not in 2020 to speed up the process of finding a reliable funding source.”