Over the past year we’ve seen an abundance of funding pledges for reducing greenhouse gas emissions from deforestation and forest degradation (REDD), but there’s been little in the way of coordination. That’s why three of the largest funds supporting REDD met last weekend to compare notes. Looking ahead to Cancún, get an inside look at a meeting that emphasized the future of REDD+. 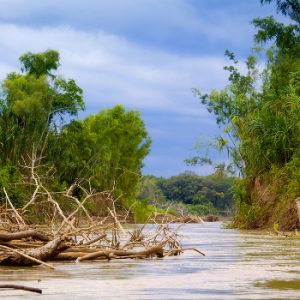 Over the past year we’ve seen an abundance of funding pledges for reducing greenhouse gas emissions from deforestation and forest degradation (REDD), but there’s been little in the way of coordination. That’s why three of the largest funds supporting REDD met last weekend to compare notes. Looking ahead to Cancíºn, get an inside look at a meeting that emphasized the future of REDD+.

November 9, 2010 | Since the announcement of the Bali Action Plan in 2007 which put land-use actions to help fight climate change on the fast track, developed countries and forested nations have devoted concerted, but often uncoordinated, efforts to direct money to help slow the onslaught of global deforestation which is believed to produce as much as 17% of global greenhouse gas emissions.

As billions of dollars continue to be put on the table for REDD, donors, forested nations, and observers all want to make sure the money for curbing forest loss gets deployed smoothly and effectively.   But transforming a handful of nascent funds designed to pass along millions of dollars in capacity-building activities into longer-term financial vehicles for funneling billions of dollars into developing nations each year is a tall order, as Francesco Martone of the Forest Peoples Programme made all too clear in his July paper, The Emergence of the REDD Hydra.

And so, on a cold and overcast Saturday in Washington, DC, dozens of representatives from multilateral development banks, civil society organizations, indigenous peoples groups, and donor and recipient countries gathered at the World Bank to discuss how the UN-REDD Programme, the World Bank’s Forest Carbon Partnership Facility and the Forest Investment Program could cooperatively take advantage of each other’s strengths and reduce the red tape and redundancies for donors and recipients seeking to use these funds.

Patricia Bliss-Guest, an administrative manager in the parent fund of the Forest Investment Program, explained the purpose of the first joint meeting of the governing bodies of these three REDD+ funds; to “build a community of practice amongst the doers.”

For those less familiar with the REDD+ alphabet soup and wondering what exactly the “doers” are already doing, check out the sidebar for a quick review.

Pep Rally Tempered by Reports from the Front Lines

The morning of the conference began with words of encouragement by representatives from a variety of multilateral development banks and similar funds such as the Global Environment Facility (GEF), which recently created a dedicated REDD+/Sustainable Forest Management fund to the tune of US$1 billion dedicated for the next three years.

Monique Barbut, CEO and Chair of GEF, laid out her reasons for confidence.   “The policy front on REDD+ is looking brighter than for any other climate change-related negotiation,” she said.   “Parties to the UNFCCC were not able to come to a final agreement at COP15, but the progress made throughout the year may very well mean that REDD+ is one of the few successes to come out of Cancíºn.”

Next up, the co-chairs of the REDD+ Partnership, a group of 71 countries established in May, 2010, to fast-track a REDD Mechanism stepped in to give a progress report on their efforts and open the floor for questions.

Federica Bietta, a representative for Papua New Guinea and co-chair of the REDD+ Partnership began with a summary of the past five months of efforts from the Partnership.   Apart from the launch of a website for the organization, including a growing voluntary REDD+ database, Bietta described agreements within the Partnership on procedural issues, including the role of the co-chairs, modalities for stakeholder participation, and on the provision of secretariat services.

In the run-up to Cancíºn, many observers will be looking to the REDD+ Partnership for further elaboration on how stakeholders – including civil society and indigenous people’s organizations – will be engaged, as the Partnership looks to lay out its work program for 2011 and 2012.

The issue of transparency and consultation received significant attention from the audience.   Representatives from Global Witness and COICA expressed concerns   about the degree to which stakeholders will be involved.   The Partnership’s “growing pains” were discussed briefly by the United States representative, and UNDP representative Charles McNeill issued a call for wider notification of stakeholders about the upcoming meeting of the Partnership in the days before the UN climate conference starting in Cancíºn, Mexico later this month.

The centerpiece of the Joint Meeting of these governing bodies was the presentation of a paper “Enhancing Cooperation and Coherence among Multilateral REDD+ Institutions to Support REDD+ Activities.”   Providing an outline for some of the steps the three funds could take in the future, including unified proposal submissions (already test-run by the Democratic Republic of Congo for UN-REDD and FCPF), a suggestion of joint missions to forest nations, and adoption of a shared set of standards for social and environmental safeguards, including requirements for transparency and reporting on governance of the funds and activities.

Despite the overwhelmingly positive comments from all representatives about the idea of moving forward cooperatively, it still remains unclear what tangible steps have been made throughout the day.

The paper containing these proposed options for working together stated, “Ideally, this joint platform would be held before the actual business meetings, so that the conclusions and recommendations can be presented to the respective governing bodies for consideration.”

As it turns out, both UN-REDD and FCPF had already concluded the meetings of their respective committees the preceding week.

The Boots on the Ground

After lunch, representatives from Indonesia, the Democratic Republic of Congo, Brazil, Mexico, Vietnam, and Tanzania gave updates on the progress of planning and implementing various forest initiatives in their respective countries.   The most common issue discussed — often at the request of the session’s co-chairs — were strategies each country had deployed to consult their citizens and the stakeholders for potential REDD+ activities.

In general, a common theme emerged from the country representatives, who described a delicate balancing act in managing realistic expectations about the potential flow of money to their constituents while engaging and briefing local stakeholders with the aim of having substantial participation from them in the development of national REDD programs and policies.

Many challenges were described in managing effective consultations, and the issue introduced here by country representatives received more thorough airing in the final panel of the day including representatives from civil society and indigenous people’s groups.   This was perhaps the first sustained move outside the congratulatory tone which dominated the earlier panels and discussions.

With speakers from Papua New Guinea (PNG), Indonesia, and Brazil, as well as from networks for local stakeholders from Latin America and Africa, the panel issued a clear call for both donor and recipient countries in REDD+ to honor and strengthen their commitments to engage and respect indigenous people and civil society.

While this included a growing list of grievances around the world where stakeholder consultations have either been manufactured or inadequate, the panelists maintained a clear vision of steps that would be necessary for REDD+ to be sustainable in their eyes.

Responding to comments made earlier by a representative from the Asian Development Bank that REDD+ should not be expected to resolve all the underlying tensions present in terms of land tenure, transparent governance and rights reforms, Susanne Breitkopf of Greenpeace Internation refused to mince words when it came to any contention that she and the panelists beside her were asking for unrealistic measures.

“We know REDD will not save the world.   We still do think it will be necessary to solve certain legal issues in countries, and we cannot solve those with overarching principles or standards,” she said.   “If we do not solve these as a part of the readiness process, it will lead to conflicts in the future.”

The Emergence of the REDD Hydra
REDD+ Partners Scrap Nagoya Plans, Set Sights on Cancun
See the co-chairs’ summary of the Joint Meeting here (PDF)
Video from the Aichi-Nagoya Ministerial Meeting of the REDD+Partnership

David Diaz is a Forest Carbon Associate with Ecosystem Marketplace. He manages the Forest Carbon Portal, and can be reached at ddiaz@ecosystemmark etplace.com