The newly-released National Climate Assessment makes it more clear than ever that the earth’s climate is already changing in dangerous ways and the United States is already feeling its consequences. Here, Jason Funk of the Union of Concerned Scientists examines the implications for agriculture and its dependent industries. 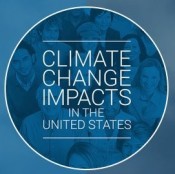 8 May 2014 | Farmers and foresters already face a great deal of uncertainty in their professions. All it takes is a few weeks of intense drought, a single hailstorm, or an uncontrolled wildfire to destroy the results of their labors, and with it, their livelihoods.

Even in the absence of these extreme events, relatively mild variations from year to year – a too-wet spring, an earlier-than-expected frost, or a hotter-than-normal summer – can significantly reduce their yields in sectors where the margin of profit is often thin.

So most farmers and foresters will take little comfort in the findings of the latest National Climate Assessment, which documents recent increases in the factors that jeopardize forests and agriculture, and projects that such risks will increase in the future.

The report suggests that with careful planning, substantial resources, and more than a little luck, some new opportunities could emerge. But for the most part, farmers and foresters will probably struggle just to keep up with the ever-changing conditions they will face.

Agriculture and forestry are important but vulnerable sectors

Forestry and agriculture together occupy nearly three-fourths of the nation’s land area. In 2012, agriculture in the U.S. alone produced nearly $400 billion, employed over 3 million operators, and managed over 900 million acres of land. Meanwhile, forests occupied over 750 million acres of land in 2010, and they store the equivalent of 25 years of heat-trapping carbon emissions for the U.S.

Each region of the country has its own predominant types of agriculture and forests, each with its own vulnerabilities to climate-related factors. For instance, cattle raised in feedlots are sensitive to the stress of hot summer days. Cherry trees in California’s Central Valley, on the other hand, must have enough cold nights to complete their winter dormant period. Corn and wheat in the Midwest need the right temperature and moisture conditions to successfully produce high yields. Western forests are especially susceptible to insects that breed prolifically in warmer temperatures, and forests everywhere are vulnerable to wildfires.

Damage is already occurring, and threatening conditions are projected to increase

Forests are already experiencing climate-related impacts. Western forests have already seen large-scale die-offs of important species, driven by combinations of interrelated factors, such as drought, water stress, high temperatures, insect pests, and pathogens. Most of these are directly or indirectly caused by climate factors. Most forest managers never really imagined these kinds of changes in their past forest management decisions, and their management choices have contributed to the vulnerability of forests in many places. So far, eastern forests have been spared these kinds of widespread impacts, but by the end of the century, they may be at risk of die-off too.

In agriculture, crop yields may fall, in part as a result of increasing pressure from weeds, insects, and diseases, as well as localized losses from extreme events like storms, droughts, and floods. Livestock may also suffer impacts from extreme heat, and supplies of feed could be disrupted by drought.

In a few places, land managers might do better, at least temporarily. Crop production in the northern Great Plains may improve until later in the century. Where soils are fertile, rainfall is abundant, and drainage is sufficient, crops might actually benefit from a little extra CO2 in the atmosphere. New forests could expand northward and uphill, where they may encounter suitable new areas. But in general, a rapidly changing climate works to the of advantage pests and pathogens, which can move more quickly than their plant hosts. And ripple effects in the globally connected marketplace for agricultural and timber products could disrupt supplies or cause volatility in prices, jeopardizing food security and consumer well-being.

Managers can adapt, but we need to give them time

Farmers and foresters have a long history of innovating in the face of challenges, and they may see climate change simply as the next big challenge. We are now armed with more specialized tools and information than ever before, and these are helping managers anticipate, detect, respond, and recover from climate-related impacts. For instance, research and modeling are helping forest firefighters to deploy resources in the right places, ahead of fires, and to control wildfires before they get too big. Drought detection and mitigation strategies are improving, giving farmers more options for how to manage their crops and herds.

Nevertheless, losses will occur. In some cases, there will be loss of life, as occurred in the tragedy of the Granite Mountain hotshots in 2013. In other cases, it will be loss of livelihoods, as when one more crop failure pushes a struggling farmer into bankruptcy.

We can each do our part to ease the pressure on farmers and foresters. We can take steps to reduce our household emissions of heat-trapping gases. We can support the expansion of clean and renewable fuels and energy technologies. And we can work to bring the real costs of climate pollution into the decisions of governments, businesses, and consumers. Every bit of effort helps to slow the pace of change, giving forest and agricultural ecosystems –and the people who depend on them – time to adjust.

Jason Funk is a senior climate scientist for the Climate and Energy Program and is an expert on land-use emissions. His efforts focus on building a better understanding of the impacts of climate change among communities, stakeholders, and policymakers, and developing effective solutions to reduce these impacts. See Jason’s full bio.