The US Senate on Thursday overrode a presidential veto of the long-awaited Farm Bill, which represents the government’s largest chunk of environmental spending. The Ecosystem Marketplace examines the consequences of the new Act for ecosystem markets. 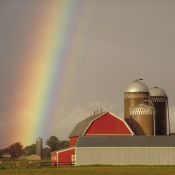 The US Senate on Thursday overrode a presidential veto of the long-awaited Farm Bill, which represents the government’s largest chunk of environmental spending. The Ecosystem Marketplace examines the consequences of the new Act for ecosystem markets.

23 May 2008 | When House Agricultural Committee chairman Collin Peterson (Democrat, Minnesota) rose in the house on Wednesday, May 21, it should have been a crowning moment: the House was preparing to override only its second Bush-era veto.

Instead, Peterson had to explain that, due to a clerical error, 34 pages of the Food, Conservation, and Energy Act of 2008 never made it to the White House. Already four months overdue, there appeared to be yet another delay in finalizing the $307 billion blueprint of federal agricultural policy.

But another twist was in the works: Democrats hammered through the override with bipartisan support late Thursday, citing an 1892 precedent.

The action has direct and indirect effects on environmental markets – for not only does the new Farm Bill govern large swathes of the ecosystem marketplace, but the relatively small portion of its funding earmarked for conservation still represents the federal government’s largest environmental outlay.

As reported several weeks ago in Ecosystem Marketplace, both the Senate and House bills contained provisions to support the development of environmental services markets. The new Act calls for the agricultural secretary to: “establish technical guidelines that outline science-based methods to measure the environmental services benefits from conservation and land management activities.”

The guidelines are to be used to develop procedures for measuring environmental services benefits, a protocol for reporting them, and a registry. Guidelines to help farmers, ranchers, and forest landowners participate in carbon markets are a priority – but the bill provides no funding for the initiative.

Parsing out the indirect effect on environmental markets gets more complicated, and reviews from the environmental community are mixed.

Environmental concerns were no doubt relieved by the end result, however, because a variety of environmental programs seemed to be on the chopping block during conference negotiations as the conferees attempted to avoid a veto.

And if no agreement had been reached, the Wetland and Grassland Reserve Programs initiated in the 2002 bill would have expired altogether.

American Farmland Trust (AFT) gives the act conditional praise: “The final compromise bill does not include all the reforms we would like to see, but there is no question it is better than the alternative — an extension of current policies,” AFT president Ralph Grossi said in a press release.

But perhaps more telling is the lukewarm release from the Theodore Roosevelt Conservation Partnership, which applauded Open Fields, a hunting access issue championed by the conservation coalition. Its $50 million in funding through the five year life of the bill is peanuts compared to the overall magnitude of the legislation.

Environmental Defense (EDF) labels the Act a disappointment. To begin with, while both the House and Senate versions included more than $5 billion in new conservation funding, the final compromise drops closer to $4 billion.

Meanwhile, since 2002, conservation opportunities worth $13.5 billion have gone unfunded. A particularly stinging loss was the “Sodsaver” provision that would have eliminated some perverse incentives — crop insurance and disaster payments — to farmers who put native grasslands to the plow. Last year the Government Accountability Office reported that agricultural policy had helped drive the loss of more than 25 million acres of grassland.

Gutting Sodsaver and adding nearly $4 billion to create a permanent disaster fund will only increase the tilling of grassland into crop land, argues EDF attorney Sara Hopper in a press release. “Add this to the pressures on grassland from high crop prices and you have a perfect storm for environmental destruction on the Great Plains.”

But perhaps the saddest part of the farm bill is that Congress has squandered a chance to reform agricultural subsidies that only comes around every five years. High commodity prices might have afforded an opportunity to wean American farmers of the cash inputs to which many have become accustomed. Instead, subsidies and price supports will keep prices high.

“Every time you raise the price for a particular commodity you’re going to give producers an incentive to expand in area,” explains Gerald Nelson of the International Food Policy Research Institute. Examining the impact of high commodity prices on biofuels in Brazil, Nelson predicts that the sustained price pressure on sugar and corn now could increase carbon in the atmosphere by 20% because of the changes in land use.

“To the extent that the farm bill causes higher prices, the effects get transmitted to the rest of the world,” says Nelson.

“We have long suggested environmental services as a better model for creating a safety net for farmers that would also deliver public services like better stewardship rather than being coupled to production and price,” explained OxFam America’s Laura Rusu.

“Current farm subsidies encourage the production of certain crops while discouraging the production of others,” she said. “These subsidies are often associated with the plowing of environmentally sensitive lands, overuse of pesticides and fertilizers, and soil exhaustion. Increased support for conservation programs can shift incentives away from commodity production toward things that benefit the American public, including cleaner water and a healthier environment.”

Erik Ness is a regular contributor to the Ecosystem Marketplace. He may be reached through his website at: http://erikness.com.