Fertilizer and other waste from across America’s Breadbasket washes into the Mississippi Watershed, and the Environmental Protection Agency is supposed to be doing something about it.  A group of environmental organizations, led by NRDC, say the Agency isn’t doing its job, and have filed suit to change that. 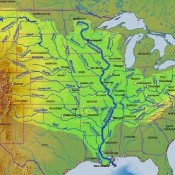 Fertilizer and other waste from across America’s Breadbasket washes into the Mississippi Watershed, and the Environmental Protection Agency is supposed to be doing something about it.   A group of environmental organizations, led by NRDC, say the Agency isn’t doing its job, and have filed suit to change that.

17 May 2012 | The Mississippi River Basin covers more than 40% of the lower 48 US states and is one of the world’s most productive agricultural regions; but what’s good for farmers is bad for fishermen as fertilizer and human wastes feed rapid algal and bacterial growth in the Mississippi River, its tributaries, and out into the Gulf of Mexico. The resulting green, orange, or brown scum is a familiar sight throughout the watershed, where it impairs recreational opportunities, fouls drinking water, and creates public health risks.

Beneath the water’s surface is another, less visible consequence: low oxygen “hypoxic” dead zones, where algae and cyanobacteria have robbed the water of oxygen needed to support aquatic life. Underwater creatures must flee or suffocate. The Gulf of Mexico is particularly severely hit each summer, when it becomes home to one of the largest dead zones in the world. Negative impacts are felt by the millions of people living on the Gulf Coast and by the region’s commercially-valuable tourism and fishing industries, yet there is little that they can do to stem the tide of nutrient pollution.

It’s an old problem that regulators have failed to address, and the Natural Resources Defense Council (NRDC), among others, is tired of waiting. So, along with nine environmental organizations in more than five states, NRDC sued the federal Environmental Protection Agency (EPA) in March of this year, arguing that the agency has failed to meet its obligations under the Clean Water Act (CWA).

Under the CWA, states and the EPA share responsibility for water quality in our lakes, rivers, streams, and other waters. Ideally, states take the lead, but the EPA also has an important role to play in supporting and prodding state action, and even stepping in to regulate where necessary to protect water quality.

Despite many years of state inaction and unsuccessful voluntary programs, the EPA has thus far declined to use the authority granted to it under the Clean Water Act (CWA) to impose numeric water quality standards or to set “total maximum daily load” (TMDL) limits on the amount of nutrients that can be discharged into bodies of water within the watershed.

The lawsuit grows out of a July 2008 petition asking the EPA to set water quality standards for the Mississippi watershed. After three years’ consideration, the EPA agreed that nutrient pollution posed a “significant water quality problem” and was “a high priority”, but denied the petition. The agency’s reasoning was that imposing federal controls would not be efficient or effective. Instead, the EPA said it planned to build on existing technical support efforts and to work with states to strengthen nutrient management programs.

The problem, according to NRDC, is that this is the same approach that has failed to control nutrient pollution to date. With few exceptions, states in the Mississippi Basin have not set numeric water quality standards or prepared TMDLs for nutrient-polluted waters within their borders. And in any case, a purely state-based approach cannot adequately protect interstate waters, like the mainstem of the Mississippi River and the Gulf of Mexico, or adequately address interstate pollution.

While the CWA envisions states being primarily responsible for protecting water quality, it doesn’t let the EPA off the hook where state actions are not occurring or are insufficient. Given practically nonexistent numeric water quality standards from states, poorly enforced narrative standards, and the magnitude of nutrient pollution problems throughout the watershed, the Mississippi Basin appears to be a poster case for where the CWA requires EPA intervention.

Déjí  vu all Over Again

The agency’s reluctance to use its rulemaking authority may be colored by recent experience in Florida, where a similar lawsuit led to five years of intensive regulatory work and multiple legal challenges. The convoluted process now appears to be running its course. Earlier this year, a federal judge in Tampa, Florida upheld the EPA’s determination that numeric nutrient standards are necessary to protect Florida’s waters, while invalidating some of the criteria set by the agency. The EPA is set to issue new rules this summer.

Meanwhile, the Florida Department of Environmental Protection (FDEP) has stepped forward, putting in motion its own numeric criteria-setting process and asking the EPA to withdraw federal rules. The EPA says it’s happy to do so if and when the FDEP adopts “protective and scientifically sound numeric standards.”

So, one way or the other, it looks like Florida’s waters will soon be subject to numeric limits on nutrient pollution. These limits will arguably leave less wiggle room than previous narrative standards and, by putting numbers behind what needs to be achieved, can provide a basis for nutrient trading programs. While longer-term results remain to be seen, this would seem to be a victory for water quality in Florida.

Even so, Florida might seem like a cautionary tale to the EPA. The complexity, political hurdles, and legal challenges that the agency faced in establishing numeric nutrient criteria in the state are not trivial, yet are likely a small fraction of what the EPA would face in the Mississippi River Basin. Practically, addressing nutrient pollution on such an enormous scale implicates utterly novel jurisdictional, scientific, political, and economic questions. It’s bound to be incredibly challenging, controversial, filled with missteps, and something the EPA would probably prefer to avoid altogether.

Regardless of the challenges, the plaintiffs in this case say that the CWA doesn’t give the EPA the choice to refuse to regulate in these circumstances. As Ann Alexander, a senior attorney at NRDC, told journalist Codi Yeager, the toughest part of tackling water quality problems in the Mississippi watershed is getting governments to do something.

“The states and the EPA are under substantial pressure not to do anything about the problem, but the law requires that they do,” she said.

With this lawsuit, NRDC and the other organizations involved in the case hope to force the issue, setting in-motion government action to control nutrient pollution across almost half of the United States.