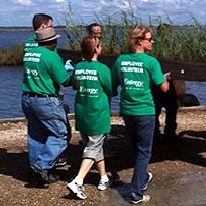 7 August 2013 | Power company Entergy got a stark wake-up call about climate risks and the need to mitigate them when Hurricanes Katrina and Rita blew through its service area in 2005, and the company lost its New Orleans headquarters for a year. That rude awakening has morphed into a wide-ranging effort to identify and address the risks that climate change present to the company’s customer base, service area, and utility infrastructure, most of which are located in the Gulf Coast region.

“We want to make sure we identify the risks facing us so that we don’t get caught unprepared, as I feel we were after Katrina,” says Brent Dorsey, the company’s director of corporate environmental programs.

In 2010, Entergy and America’s Wetland Foundation released a study that found that Gulf Coast communities could suffer more than $350 billion in economic losses over the next 20 years due to growing environmental risks. The study, Building a Resilient Energy Gulf Coast, found that the economic losses could increase up to 65% by 2030 due to economic growth and subsidence, as well as the impacts of climate change. On average, the Gulf Coast region already faces annual losses of nearly $14 billion.

But the study also found that there are several adaptation measures that can reduce these risks such as improved construction codes and restoration of wetlands, which have strong co-benefits such as biodiversity protection, ecosystem services or second-order economic effects – meaning risk aversion that encourages economic growth.

The destruction of the wetlands has been a major topic of conversation in recent weeks due to a lawsuit filed against nearly 100 oil and gas companies two weeks ago by the Board of Commissioners of the Southeast Louisiana Flood Protection Authority – East, a public entity that is responsible for governing the levee districts of Orleans, the Lake Borgne Basin and East Jefferson in Louisiana. The lawsuit asks a Louisiana state court to hold these companies liable for the abatement and restoration of the coastal lands.

“Wetlands provide a natural defense against storm surge,” Dorsey says. “A lot of the deterioration of the wetland is due to the levee system that was put on the Mississippi River.”

Restoring the wetlands is a major component of Entergy’s efforts. Coastal Louisiana suffers one of the fastest rates of wetland loss in the world, with restoration costs estimated in the tens to hundreds of billions of dollars, the company notes, requiring industries and communities to be resilient to survive.

In September 2012, the American Carbon Registry approved a wetlands methodology that will allow landowners to quantify the carbon sequestered by restoration projects and then sell verified offsets on the voluntary carbon markets. Entergy, through its Environmental Initiatives Fund, financed the development of the methodology, as well as the first pilot project being developed.

“We’re really interested in wetland restoration because we see the wetlands as a natural barrier,” Dorsey says.

The company has also taken such steps such as replacing wooden poles with stronger concrete structures and raising the levees around its substations to ensure that its infrastructure is more resilient. In addition, Entergy has relocated entire departments, moving its transmission headquarters to Jackson, Mississippi, where the company temporarily moved its headquarters after Katrina, and its accounts payable department to Hammond, Louisiana.

“We saw we were physically at risk to the impacts of climate,” Dorsey says. “We know we are going to have to adapt.”

Unfortunately for many companies, the reality of climate risks and the need to mitigate and adapt to the challenges they present fails to take hold until a significant weather event occurs, whether it be the devastation caused last year in Connecticut, New Jersey and New York by Superstorm Sandy or the unusual derecho event in the Washington, DC area, he says. But these weather events have led officials to become more proactive in their planning efforts.

In March, the Center for Clean Air Policy Center hosted a workshop called Severe Weather & Critical Infrastructure Resilience: Preparing Washington D.C. to help identify potential climate-related risks for the DC area. One key issue discussed was the vulnerability of the Washington Metropolitan Area Transit Authority (Metro) to severe weather impacts. Equipment damage from flood prone vent shafts are one area of particular and immediate concern and Metro is currently conducting an analysis of its vent shafts, which will be required for certain vital locations to protect the entire system from significant damage and the region from major service disruption, the workshop report noted.

In June, outgoing New York City Mayor Michael Bloomberg proposed a $20 billion climate change adaptation plan. A Stronger, More Resilient New York puts forward a comprehensive plan that contains recommendations both for rebuilding the communities impacted by Sandy and increasing the resilience of infrastructure and buildings across the city.

“There’s nothing like experience to get your attention,” Dorsey says. “We are trying to share our experience and people are listening.”

A Department of Energy report released in early July examined the US energy sector’s vulnerabilities to climate change and extreme weather, with the report noting that increasing temperatures, decreasing water availability, more intense storm events, and sea level rise will each independently, and in some cases in combination, affect the ability of the US to produce and transmit electricity from fossil, nuclear, and renewable energy sources.

“I think the energy industry has made great strides in trying to prepare for this sort of thing,” he continues. “But it took a variety of hurricanes taking a lot of energy production out of service.”

The power plants operated by Entergy and its counterparts in the electricity industry, for example, are at risk from decreasing water availability and increasing ambient air and water temperatures, which can reduce the efficiency of their cooling operations and increase the risk of partial or full shutdowns of generation facilities.

“There are all these other kind of hazards that are climate-related that need to go through the adaptation and resiliency lens,” Dorsey says

Ideally, efforts to mitigate and adapt to climate change would be driven by federal greenhouse gas regulation, which Entergy continues to advocate for because the absence of a price on carbon limits the impact of these individual efforts, he says.

“We would like to see mitigation first, but with climate being a third-rail issue, adaptation seems to be a safer issue to talk about,” he says. “Clearly, those two are preferably to the suffering of people.”

This is the third in a series of stories focusing on the economics of ecosystem protection along Louisiana’s Gulf Coast.