Over 30 representatives of Indigenous Peoples worldwide have gathered at a Forest Carbon Partnership Facility’s (FCPF) workshop on REDD+ which, Benoit Bosquet of the FCPF says was less focused on the possible worrying impacts and more on how Indigenous communities can benefit and become active participants in the REDD+ process. 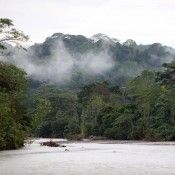 Over 30 representatives of Indigenous Peoples worldwide have gathered at a Forest Carbon Partnership Facility’s (FCPF) workshop on REDD+ which, Benoit Bosquet of the FCPF says was less focused on the possible worrying impacts and more on how Indigenous communities can benefit and become active participants in the REDD+ process.

This article was originally published on the World Bank’s blog page. Click here to read the original.

The views are those of Benoit Bosquet and not necessarily those of Ecosystem Marketplace, Forest Trends, or its affiliates.

6 March 2013 | A little while ago, I blogged about an unprecedented meeting of Indigenous Peoples’ representatives from 28 countries that took place on the idyllic islands of Guna Yala, Panama, in September 2011.

One and a half years later, it is fair to say that we have come a very long way as we welcome over 30 representatives of Indigenous Peoples and southern civil society organizations from Latin America, Africa, and Asia-Pacific for a workshop on the Carbon Fund of the Forest Carbon Partnership Facility (FCPF) here in Washington, DC this week. The Bank serves as the Trustee and the Secretariat of the FCPF, a global partnership that is helping countries draft REDD+ readiness plans and will provide carbon payments to countries that meet certain targets.

Since our initial meeting in Panama, Indigenous Peoples’ representatives adopted an Action Plan, travelled the world to meet, dialogue and learn, and gathered in regional follow-up meetings to build capacity and prioritize demands.

When I look back at the beginning of the series of dialogues with Indigenous Peoples, I remember that discussions mainly revolved about the role of Indigenous Peoples in REDD+ (which stands for Reducing Emissions from Deforestation and Forest Degradation). Indigenous Peoples were concerned that REDD+ could become a means for pushing them off their ancestral lands. With their livelihoods and cultural identity deeply connected to the forest and the land, losing access to them would mean losing everything. At the time, our engagement centered on broad questions such as, How do we ensure that REDD+ will not undermine customary rights to land?

While the complete response to these questions is bound to evolve slowly as countries implement REDD+, and in-step with the development of the global negotiations on REDD+, the focus of the discussions has matured tremendously. They no longer revolve around the basic question of whether there should be REDD+ or not, but of how Indigenous Peoples can participate fully and effectively in REDD+ design and benefit from implementation. Indigenous Peoples have turned from critics of REDD+ to critical actors for REDD+. And they are now fully engaged in the FCPF at various levels.

Yesterday and today, representatives provided their inputs into highly technical aspects of the FCPF’s work, such as how to assess a country’s REDD+ readiness and how to develop the methodological framework for the FCPF Carbon Fund, one of the leading multilateral results-based REDD+ financial mechanisms.

This shows just how much has been achieved at the regional dialogues held in Arusha, Tanzania, in Lima, Peru, in Chiang Mai, Thailand, and finally in Doha, Qatar at the margins of the annual UNFCCC gathering. Immense capacity has been built to enable Indigenous Peoples’ representatives to proactively engage in relevant discussions, rather than merely being on the receiving end of information dissemination.

However, the process of engaging Indigenous Peoples is still far from perfect – in particular in countries with large, often heterogeneous and difficult-to-reach indigenous populations, where the question of the “representativeness” often arises.

At the World Bank, a newly appointed Senior Advisor for Indigenous Peoples and Ethnic Minorities, Luis Felipe Duchicela, a former National Secretary of Indigenous Affairs of Ecuador who is of Quechua descent, will tackle these and other related challenges as he embarks on a number of ambitious projects. These will include a public consultation process with Indigenous Peoples on our safeguard policies and developing the idea of an Indigenous Peoples Advisory Council at the World Bank. With these tasks at hand, he reached out to the audience to ask for their support and input.

I would like to cite his wise words as I could not have formulated better the importance of involving Indigenous Peoples in the REDD+ agenda as we continue the partnership of the FCPF:

“I truly believe that our engagement as Indigenous Peoples in matters related to climate change, biodiversity, conservation and social development is critical to the wellbeing of our communities and our own livelihoods. Our ancestral knowledge, wisdom and deep relationship with Mother Earth are treasures that will help all of humanity in its quest for a better future for the generations to come”.

A self-introduction and speech from Luis Felipe Duchicela at the FCPF workshop can be found here.

More on Engaging Indigenous Peoples and Forest-Dependent People in the FCPF can be found here.

Benoit Bosquet is a Lead Carbon Finance Specialist and Coordinator of the FCPF at the World Bank’s Environment Department.