Six years after the worst fire in California’s recorded history, the state is trying out carbon financing to help restore one of its struggling forests.   The project raises – and perhaps answers – several serious questions about enrolling public lands in offset programs, but the elephant in the room – US federal land – continues to loom largely unaddressed. 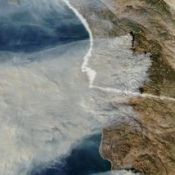 Six years after the worst fire in California’s recorded history, the state is trying out carbon financing to help restore one of its struggling forests.     The project raises – and perhaps answers – several serious questions about enrolling public lands in offset programs, but the elephant in the room – US federal land – continues to loom largely unaddressed.

26 February 2010 | On October 25, 2003 a human-started fire known as the Cedar Fire was ignited in Cleveland National Forest in southern California.   Within two days, it had burned across more than 280,000 acres, destroying 2,200 homes and killing 13 civilians and one firefighter.

Ninety-five percent of Cuyamaca Rancho State Park’s nearly 25,000 acres burned in the blaze, and follow-up studies have since shown natural regeneration to be wanting.   California State Parks is now looking to the emerging carbon market for funding to reforest and restore 2,500 acres of the park’s hardest hit “sky islands”, which it hopes will serve as a seed source for the remainder of the park.

“If we could enhance sequestration and provide all the other benefits that parks provide, including educating the public, it just seemed like a no-brainer to me,” says Caryl Hart, Chair of the California State Parks Commission.

Cuyamaca Rancho has launched its new project with a $2.7 million nest egg stemming from a 2007 legal settlement between energy giant ConocoPhillips and California’s Attorney General.   This covers only a portion of the project’s anticipated cost.   It also amounts to nearly half the $6.3 million budgeted for the entire Colorado Desert District in which Cuyamaca Rancho is one of three parks, highlighting the need to work outside the bounds of traditional funding.

Commissioner Hart confronted a common dispute over offsetting on public lands as the project launched, namely that such activities should be conducted under business as usual on public lands and should therefore not be counted as additional projects.

“It’s very easy for someone that’s critical of this to come and say ‘Oh you guys should be doing this.   You should do reforestation,’” she says.

But current Parks policy – even when there is money available – doesn’t provide funding for reforestation except in cases of significant erosion, mitigating hazards to park visitors, or invasive species risks.

“We don’t get to just choose,” says Hart.   “We have to deal with crises as they arise, so in order to have resources go to something like this, this is the only possible way.   I think that puts it beyond criticism in terms of the additionality issue.”

As cash-strapped states face budget shortfalls around the country, public lands agencies may be increasingly tempted to look towards ecosystem service markets to finance new activities.

“I was dealing with a struggling parks department that was constantly and continued to be threatened with closure, mass park closure,” says Hart.   “Complete defunding was proposed this year, a zero budget for parks.   We’re barely surviving out here.”

Federal Lands on the Sidelines

On Nov. 18, Oregon Senator Ron Wyden convened a hearing of the Subcommittee on Public Lands and Forests to address the potential for federal land management to mitigate climate change and generate offsets into the carbon market.   While Senator Wyden stated his interest in creating offsets from public lands, both federal testimonials at the hearing – from USDA Forest Service Director Tom Tidwell and Kit Batten, Science Advisor in the Interior’s Office of the Deputy Secretary – were decidedly non-committal.

Following up, on January 6, six prominent environmental NGOs sent a letter to Interior Secretary Ken Salazar and Agriculture Secretary Tom Vilsack urging the rejection of federal land enrollment in the offset market.   The petitioners argued that federal participation in the offset market had the potential to discourage private lands conservation and offset generation, depress offset values by flooding the market, and could affect the normal appropriations process for public lands if expectations arose that these alternative revenue streams should fund core operations.   The authors also explicitly criticized offset projects the US Fish and Wildlife Service launched since a 2007 partnering with The Conservation Fund as “insufficient” to meet regulatory market expectations.

Although the Fish and Wildlife Service has been dabbling in the voluntary over-the-counter offset market, it appears to be the prospect of broader involvement by federal lands agencies such as the Bureau of Land Management and Forest Service in a regulatory market that drew these groups’ primary concern.   The leanings of the major policymakers at Departments of Interior and Agriculture are still unclear.

“So far I think we haven’t really touched this one even though there are very lively discussions going on about the participation of public lands in crediting schemes” says Mark Nechodom, Deputy Director for Carbon Markets at the US Department of Agriculture’s (USDA) new Office of Ecosystem Services and Markets (OESM).   Prior to joining OESM, Nechodom worked for the Forest Service, where he helped write the public lands language in California’s Climate Action Reserve forest protocol under which the Cuyamaca project is being run.

Nechodom also sees several major issues needing to be resolved before widespread federal offsetting would be on the table.   From clarifying the legal details of carbon credit property rights to weighing multiple resource management priorities that may conflict with carbon contracts, he believes “we just haven’t thought through it deeply enough to my satisfaction that I would say we would be able to do this.”

Meanwhile in California, Cuyamaca Rancho State Park pushes forward into the carbon market as the first public lands forestry project to be listed on a major registry.

“The money goes to fighting fires which means more trucks, more technology, more people.   All of the rhetoric to do more forest management is absolutely necessary but that’s not the trend we’re seeing at the state or federal level.”

“That’s where Cuyamaca is interesting,” says Brunello.   “It’s pretty straightforward.   An area is burned, it needs to be reforested, and there’s an opportunity to plant trees where we know there’s absolutely no budget.   It’s easy to communicate, easy to understand, and it has a lot of partners that are all fired up about it.”

Mark Nechodom also sees big federal potential for additional reforestation.   “We have a huge backlog,” he says.   “We’ve counted a backlog of post-fire restoration in California National Forests alone that is about 30,000 acres a year.”

Choosing Carbon as a Means or an End

For Cuyamaca, the post-fire restoration context allowed for major overlap between carbon sequestration and other management priorities.   Nancy Budge, a private forestry consultant who wrote the Project Design Document and other offset documentation for State Parks had a good vantage point.

The result was clear.

“What we did was maximize the restoration,” says Budge.   “If you purely go for maximizing carbon offsets, we might have planned it a little differently, but I don’t think any of us would’ve been happy with it.”

Caryl Hart sees things from the same perspective and has big hopes for the Cuyamaca project.

“The initial reaction of people tends to be negative to the whole idea of offsets,” she says, “and I’m hoping that a project like Cuyamaca can begin to shift that perspective.”

The broader influence of Cuyamaca on state policies – and perhaps federal policies – around the country remains to be seen.

David Diaz recently joined Ecosystem Marketplace as a Forest Carbon Associate.   Prior to that, he was employed on a contract-basis for American Forests, which is acting as a coordinator for the Cuyamaca Project’s financing between California State Parks and ConocoPhillips.   The author did not receive any compensation or editorial input from American Forests or any of the organizations described in this article for the research or writing that went into it.

He can be reached at ddiaz@ecosystemmarketplace.com