Thursday at the National Mitigation and Ecosystem Banking Conference saw a lot of talk on species conservation specifically for the greater sage grouse and the recently listed lesser prairie chicken, with some disagreement over the best approach. Meanwhile, Ecosystem Marketplace chatted with new NMBA president Wayne White on the coming year. 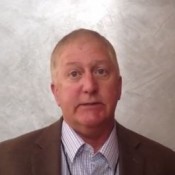 9 May 2014 | DENVER | On Thursday, we caught up with incoming NMBA president Wayne White and Partnerships Committee co-chair Adam Davis to talk about NMBA work and priorities this year.

White: Key opportunities for the Association, including influencing policy in Washington, creating a process for working with local agency offices on national issues, and the search for an NMBA Executive Director.

Davis: The Partnership Committee’s accomplishments to date in engaging NGOs also engaged in mitigation, and how they’ll build on these efforts in the coming year.

Yesterday’s talk on the Department of Interior’s new mitigation strategy carried over to today’s starting session which was on NGOs’ perspective on compensatory mitigation. John Kostyack of the National Wildlife Federation (NWF) was one of the presenters. Because his work centers around building climate change resiliency, he focused on the durability and climate-smart conservation aspects of the strategy. Mitigation must be long-term because of climate impacts, Kostyack says, and further clarity is needed regarding how the strategy will adopt climate-smart conservation and use science based tools. The plan doesn’t really explain how it will implement these parts, he says.

The NWF is developing its own guidelines on conservation in a changing climate to be released soon. The guidance highlights durability and permanence as key elements.

Will McDow, representing the Environmental Defense Fund (EDF), also spoke during this session briefly mentioning the habitat exchanges the organization is developing for species listed under the Endangered Species Act (ESA), like the lesser prairie chicken, and for species in danger of being listed like the greater sage-grouse.

McDow mentioned these species only briefly during the first session but, in fact, these animals are prime topics of conversation at the conference this year and, between the two, constituted the entire following session.

The Fish and Wildlife Service (FWS) has created a range-wide compensatory mitigation framework for the greater sage-grouse to help the 11 states within the bird’s range implement meaningful conservation and prevent a listing status. The grouse’s listing decision must be made by late 2015. The greater-sage grouse’s situation is complex for many reasons-one of them being just how large its range spans. Habitat falling on private verse public land varies depending on the state, which complicates the matter further. In Montana, for instance, majority of the bird’s habitat is on private land but in Nevada, almost 80% of the range falls on public land. A rangewide plan such as the one being used for the lesser prairie chicken isn’t feasible for the greater sage-grouse, says Shauna Ginger, an ecosystem services biologist with the FWS. “We’re aiming for less plans and more consistency among them,” she says.

Most of the conservation programs for the bird will be state level with a few county wide plans. The Service’s framework is meant to offer guidance to the states in creating their plans. And the framework as a basis should help provide a level of consistency as well.

It’s not constrictive, but does lay out some standards and goals the programs should meet. Using the mitigation hierarchy is one as is achieving a net positive outcome for the species. This should be done by drawing from the DOI’s mitigation strategy and developing effective landscape-level conservation.

Two states have officially developed sage-grouse conservation plans. One is Wyoming and the other is Utah. Alan G. Clark, the Watershed Program Director in Utah’s Department of Natural Resources, was at the conference to discuss Utah’s plan. The plan anchors on Sage-Grouse Management Areas (SGMAs), which are high quality habitat spots for the specie and where most of the protection and conservation measures will take place. The plan follows the mitigation hierarchy and includes conservation banking as a potential mitigation tool.

During the discussion, the controversial method of using term or temporary mitigation to conserve the sage-grouse came up. And to Ginger’s knowledge the approach isn’t part of sage-grouse conservation as of now. The emphasis is on permanent offsets for the species, she says.

It is however being used to mitigate for the lesser prairie chicken, which is one of several issues conservation banker Wayne Walker takes with the Lesser Prairie Chicken Range-wide Conservation Plan. Walker, the founder of Common Ground Capital (CGC), a conservation banking firm focused on landscape level prairie chicken banks, (Walker notes in the video CGC’s chicken banks were recently approved) dissected the plan throughout his presentation pointing out elements he sees as faults. These include the Service’s inclusion of the 4 (d) rule, a lack of scientific data for its findings and the negative impact it will have on the market-based banking industry.

Along with the constructive criticism, Walker also highlights the importance of each party involved and the need for further collaboration and support between them.

In this video, Walker summarizes lessons learned and lays out steps he believes needs to be taken in order to deliver a positive outcome for the prairie chicken.

Tomorrow the conference winds down with the Legislative and Regulatory Update.