Most of the viable REDD projects up and running today work in part by taking the pressure off forests, and most do that by providing alternative livelihoods for people who might otherwise be forced to chop down trees. That’s a key component of the “landscapes approach” to agriculture that dominated side events at climate talks in Warsaw, but will it work in the UNFCCC? 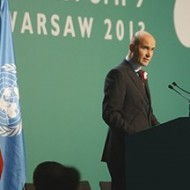 5 December 2013 | You couldn’t escape it if you attended year-end climate talks in Warsaw this year. After all, Indonesian Deputy Minister Heru Prasetyo talked about it incessantly, as did World Bank Vice President Rachel Kyte. Peter Holmgren, who heads the Center for International Forestry Research (CIFOR), built the two-day Global Landscapes Forum around it, and the United States, United Kingdom, and Norway launched the Initiative for Sustainable Forest Landscapes (ISFL) to make it a reality. Even official negotiators meeting under the auspices of the under the auspices of the United Nations Framework Convention on Climate Change (UNFCCC) held a two-day workshop on it.

The “it” is the “landscapes approach” to reducing greenhouse gas emissions from fields, farms, and forests. But what exactly does that mean?

Several speakers described it as a “holistic” approach that aims to go beyond reducing emissions from deforestation and forest degradation (REDD) and even beyond REDD+ (which incorporates more activities) by shifting the focus beyond just capturing carbon in trees and towards a complete re-engineering of the rural economy that incorporates people, places, and culture.

It’s the kind of monumental aspiration the UN is great at articulating but horrible at achieving – until you stop to consider that this “shift” actually reflects what’s already happening in the voluntary carbon markets, and it’s being led by foresters, farmers, and project developers.

Indeed, voluntary REDD projects like Brazil’s Surui Carbon Project and Kenya’s Kasigau Corridor REDD Project work by jump-starting sustainable agriculture programs that involve organic farming and the harvesting of non-timber forest products like Brazil nuts. Our most recent State of the Forest Carbon Markets Report showed that these two projects were typical of programs being implemented around the world.

The excitement in Warsaw over landscapes took two forms: some were relieved to finally see it front-and-center, while others were pleasantly surprised and even shocked to see that these approaches existed at all.

Those dual reactions highlight a disconnect that has always existed between the UNFCCC and the voluntary carbon markets. As early as the Bali climate talks in 2007, and probably long before that, REDD project developers warned that the negotiators charged with creating a REDD governing regime were ignoring the way REDD was taking shape on the ground.

“These people think REDD is about putting a fence around the forest,” said former Cargill executive David Pearse*, shaking his head. “But REDD will only work if you look at it as an ‘embedded option’ in a larger portfolio that involves sustainable land-use.”

“Most deforestation is caused by small-scale farmers who are acting out of need,” he said. “If you don’t involve those people in your project, you won’t get any results.”

Five years on, the track record in voluntary carbon bears that out: with few exceptions, voluntary REDD projects work by helping local people develop sustainable livelihoods. The few exceptions are usually related to wilderness conservation efforts in northern borneal forests, and not to tropical forests populated by forest people.

In theory, the experiences of the voluntary markets will be used to inform the compliance markets, and that’s why the organizers of the Landscapes Forum blended Forest Day and Agriculture, Landscapes and Livelihoods Day into one two-day forum that generated a 9-page list of recommendations to be fed into formal negotiations in years to come. Those recommendations are exhaustive, but the gist is that the UNFCCC needs to put more emphasis on the drivers of deforestation.

The upshot is that, while everyone at the Warsaw talks seemed to welcome the focus on landscapes, they remain divided into two camps: one that wants to bring the pay-for-performance model to bear on all aspects of landscape management, and one that seems content to let the landscapes paradigm serve as a guiding vision for REDD finance.

Indonesia’s Prasetyo pitched his tent somewhere between the two camps. He sees the landscapes approach to carbon finance as part of an overall transition to a more sustainable agriculture regime, but in the short term he sees it more as a tool for communicating the dynamics of REDD to a wider audience.

“For too many people, REDD is just an abstract financing tool,” he explains. “But landscapes – which include the fields and the farms, the ranchers and farmers – those are things that people can see. If we tell them that we’re preserving the landscape, and that REDD is just one tool to help us pay for it, that they understand.”

Over the long term, he says, REDD  simply won’t mobilize enough funding to overhaul an agricural economy the size of Indonesia’s. At most, it can get the ball rolling and open a few minds to the possibility that forests can be utilized without being harvested and destroyed.

If you survey the landscape for environmental finance, you’ll have no trouble seeing why people want to unify it. Beyond REDD, there are scores of practices designed to incentivize good land stewardship – from carbon-based payments for no-till farming to watershed payments for reduced runoff to mitigation banking that supports habitat protection and restoration. Each of them has promise, but sometimes that promise is more catalytic than conclusive.

More importantly, both said the payments themselves paled in comparison to the benefits they received in the form of higher yields – a point the World Bank’s Kyte made in Warsaw while telling delegates about John Obuom, another Kenyan farmer who boosted his yields by participating in a pilot project designed to measure the impact on emissions of various farming practices.

Experiences like these illustrate both the allure and challenge of shifting to a landscapes approach. From a scientific and economic perspective, the fields, farms, and forests are all connected, but from a regulatory perspective they are almost always in different silos, and those silos are often fragmented and contradictory. The Brazilian state of Acre has created a regulatory framework built on ecosystem services and could theoretically serve as a template for a landscapes approach, but so far it stands alone and remains unproven.

For these and other reasons, long-time REDD proponents remain divided over the wisdom of bringing the landscapes approach into the UNFCCC. Some, like Prasetyo, say it never hurts to give negotiators a more accurate governing paradigm. Others, like Bettelheim, agree – but only to a point. He’s worried the UNFCCC will become so fixated on trying to measure the new activities that it will never move forward.

The Kenyan experiments make it clear that, when it comes to farming, the environmental payments alone aren’t always high enough to incentivize change. Those payments, however, could be aggregated to fund larger-scale education campaigns, with the payments based in part of estimated emission-reductions from farms or even from avoided deforestation.

That’s the direction the United States, United Kingdom, and Norway are heading with their ISFL initiative. The payments will be based on reduced emissions from deforestation, but the activities funded will range from training in sustainable agriculture to a guarantee fund for green businesses. The lion’s share of the economic incentive will come in the form of buy-in from agricultural giants like Unilever, which the donors hope will agree to pay extra for sustainably-harvested products.

That approach, however, can only go so far because not all forested countries are suited to sustainable agriculture. For some, the only solution may be simply to pay for forest conservation. For them, it’s not clear how much value a landscapes approach will ultimately offer.

*NOTE: Interestingly, I did not feature the quotes from Bettelheim or Pearse in the stories I wrote then, but their statements informed my understanding of REDD and I have cited them quite often elsewhere. Pearse was speaking in a private conversation on the side of the COP, while Bettelheim was participating in a panel discussion at the Carbon Expo.