After two frustrating weeks of negotiations, delegates of the UN Framework Convention on Climate Change saw talks end on a positive note. The mood was less celebratory at our COP debrief as experts acknowledged some progress, but said the heightened tensions between developed and developing countries could lead to continued paralysis in future negotiations. 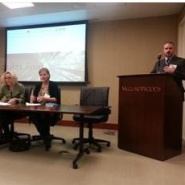 After two frustrating weeks of negotiations, delegates of the UN Framework Convention on Climate Change saw talks end on a positive note. The mood was less celebratory at Ecosystem Marketplace’s COP debrief as experts acknowledged some progress, but said the heightened tensions between developed and developing countries could lead to continued paralysis in future negotiations.

6 December 2013 | WASHINGTON DC | “Can I say it was disappointing?” asked Charlotte Streck, director of Climate Focus. “Probably not, because that would mean that I had expectations.”

Streck’s question and answer prompted nervous laughter from a full house at the Wednesday night debrief that Ecosystem Marketplace, McGuireWood LLP and the International Emissions Trading Association (IETA) held in Washington, DC to take stock of the 19th international climate conference, which concluded in Warsaw on November 23. Her reaction was a far cry from the euphoria that enveloped Warsaw after the “REDD Rulebook” (see sidebar, right) was approved.

“At the end you have decisions,” Streck acknowledged. “And that gives hope, at least for a moment. Until you read the decisions and you say Oh god, there’s actually nothing written in it.”

In Warsaw, seven decisions on REDD+ (the UN framework for reducing emissions from deforestation) finally opened up the possibility for results-based financing to flow to countries that reduce deforestation. However, Streck was critical of the guidance on reference levels – the baseline levels of deforestation that countries must determine before being able to reduce against them – which she said was not rigorous enough to attract the kind of pay-for-performance funding needed to save endangered forests on a meaningful scale. Ecosystem Marketplace will explore this issue specifically in more detail later in this series.

IETA CEO Dirk Forrister shared Streck’s disappointment about the overall outcomes from this year’s Conference of Parties (COP19), but said his organization was gearing up for a busy – and, hopefully – productive 2014 as negotiations shift from the technical issues to larger, binding reduction targets.

“I think it’s going to be a really big year,” he said. “The target-setting begins next month. The European Commission will put its initial proposal together the 21st of January. The real games begin in Lima next year.”

Marnie Funk, Senior Government Relations Advisor for Shell Oil company, was discouraged by the lack of discussion of carbon capture and storage (CCS) and an international carbon price at COP19, but she nevertheless found some silver lining.

“You at least didn’t come out with a weak agreement,” she said. “You preserve the option of potential meaningful progress at a future COP.”

Protestors at COP19 held signs – and even formed letters with their bodies – to ask negotiators WTF? By which they meant, “Where’s the finance?” (Among other sentiments.)

It was a good question. The end of COP19 yielded $100 million worth of commitments to the existing Adaptation Fund and another $280 million to REDD+ jurisdictional efforts.
“That’s not a ‘B’; it’s an ‘M’,” Forrister said to clarify one of his slides, making the point that climate finance that is in the millions rather than billions of dollars is rather unambitious.

The ongoing struggle to ensure the flow of sufficient funding raises the question of whether the UNFCCC is in fact the right forum to discuss what could be a massive transfer of wealth from developed countries – the historical emitters – to developing ones that are now experiencing billions of dollars of loss and damage from climate-change-intensified storms and slow-onset sea level rise.

The fact that Typhoon Haiyan tore through the Philippines right before the COP heightened the issue of loss and damage, Forrister said, with Filipino negotiator Yeb Sano holding a hunger strike right outside of the lunchroom. Despite significant disagreements on this issue, negotiators nailed down text that recognizes loss and damage and agreed to work on an international mechanism to provide the most vulnerable countries with protection. But the fundamental divide between developed and developing countries over the funding of the mechanism has yet to be resolved.

“Is the UNFCCC the platform of choice to address what is really becoming an economic issue?” asked Vikram Widge, the Head of Climate Finance and Policy at the International Finance Corporation. “Whether it’s loss and damage or emerging markets, many of the discussions [at the COPs] are now around economics and finance.”

Streck agreed that the strength of the UNFCCC as a forum may be in convening technical experts rather than financial ones. The idea of a multilateral environmental treaty in which countries come together to jointly ‘manage the global commons’ may be an idealistic relic of the 80s, she said.

Discussions around the Green Climate Fund (GCF), through which developed countries agreed to funnel $100 billion annually by 2020, progressed slowly. A ministerial leader’s summit in September may decide the GCF’s fate, though Widge said that his sense is that the fund won’t be capitalized until 2015. COP19 brought to light the need for monitoring, reporting and verification around MRV itself, he added.

Though panelists expressed mixed feelings about the efficacy of the UNFCCC process, the show will go on – in Lima next year and then Paris the year after that. And even for the most jaded COP veterans, there is at least the sense that things will get more interesting over the next two years.

Though the “outcome with legal force” isn’t due until 2015 in Paris, the next installments of the Intergovernmental Panel on Climate Change (IPCC) report will come out over the coming months, and the expectation is that the adaption assessment in particular will strengthen climate science and the urgency of its implications. The IPCC report will at the least serve as a sobering backdrop as countries develop their proposed “contributions” for emissions reductions.

While the premise of the UNFCCC is to keep the global average temperatures from rising more than 2 degrees Celsius – the maximum warming that scientists agree can occur without risking catastrophic consequences – the panelists observed that current negotiations seem less connected to this line in the sand. “I don’t think we are going to make 2 degrees,” Widge said. “We’re trying to avoid 4 degrees at this point.”

But even the fight leading to the inclusion of the word “contributions” in the final text reflects the fact that every comma and word matters when negotiating the text of an international treaty. Forrister described how even the discussions over setting a timetable to ensure that outcome is reached were particularly hung up on word choice.

Allie Goldstein is a Research Assistant in Ecosystem Marketplace’s Carbon Program. She can be reached at agoldstein@ecosystemmarketplace.com.