Pope Francis fears that companies may use carbon offsets to buy their way out of their environmental responsibilities, but the evidence tells a different story. While some bad actors surely abuse the mechanism, most companies that use offsets do so to reduce emissions far beyond their own base of operations. Here are the numbers. 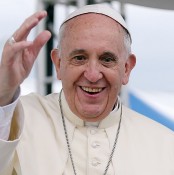 25 June 2015 | Pope Francis’s “Ecumenical Letter on Care for Our Common Home” is elegant, inspirational, and insightful. It may even prove to be transformational if people heed its call to deliver themselves from soul-sucking consumerism and immerse themselves in nature and the brotherhood of man.

The Pontiff rightly identifies the drivers of this mess: our disconnection from nature and from each other, our embrace of absolute freedom as a core spiritual value, and our ability to simply deny inconvenient truths. But he’s weak on the solution front, and he dismisses one of the most effective tools at our disposal because he believes it doesn’t “allow for the radical change which present circumstances require.”

The tool is carbon offsetting, which is the practice of reducing greenhouse-gas emissions by supporting activities that save endangered rainforest, distribute clean-burning cookstoves, or support other clean technologies. In the past five years, indigenous people have used offsetting to save their forests (by tapping a mechanism called REDD+) and demarcate their territories, while rural farmers around the world have used it to develop sustainable land-use practices.

The Pope fears that offsetting “may simply become a ploy which permits maintaining the excessive consumption of some countries and sectors,” which is an old concern about corporate indulgences that let companies “buy their way out” of their obligations to reduce emissions. That, however, isn’t how offsets are designed to work, and our research shows that isn’t even close to what’s happening right now. In fact, far from using offsets to buy their way out of their obligations, most companies are using them to reduce emissions beyond their immediate base of operations.

Earlier this year, we tapped into the Carbon Disclosure Project’s (now just “CDP) database of 1,882 companies, and we found that only 214 of them used offsets. Those 214, however, were using them as part of a comprehensive sustainability strategy, and they were doing a lot more to reduce emissions than were the companies that didn’t offset. In 2013 alone, they spent $41 billion to improve energy efficiency, design lower-carbon products, and educate both their employees and their consumers on the climate challenge – which is exactly the kind of awareness-raising the Pope is pushing for.

Most only turned to offsetting after reducing their own direct emissions, and they usually used their offsets to reduce emissions from their suppliers, and not from themselves.

On top of that, the most popular offsets were those that helped indigenous people and the rural poor save their endangered forests – activities the Pope embraces in other parts of his encyclical.

“It is essential to show special care for indigenous communities and their cultural traditions,” he writes. “For them, land is not a commodity but rather a gift from God and from their ancestors who rest there, a sacred space with which they need to interact if they are to maintain their identity and values.”

Later, he turns to the rural poor more generally, and he highlights their need for marketing and technological support.

“Agriculture in poorer regions can be improved through investment in rural infrastructures, a better organization of local or national markets, systems of irrigation, and the development of techniques of sustainable agriculture,” he writes. “New forms of cooperation and community organization can be encouraged in order to defend the interests of small producers and preserve local ecosystems from destruction. Truly, much can be done!”

Yes! But he fails to note that much is already being done – largely with the help of REDD+ finance. Across the Amazon, for example, indigenous people are using REDD+ in particular and offsetting in general to develop long-term, sustainable agriculture strategies and to support their traditional ways of living. In Africa, indigenous people are using REDD+ finance to secure their land rights and develop sophisticated land-use programs, while similar programs are underway around the world.

Offsetting, however, isn’t a complete and total “fix” to the climate mess, and it isn’t intended to be. Poorly-implemented, it may even become the ploy the Pope worries about. But done right, it’s an incredibly effective tool in a very large toolbox, yet it will only deliver on a large scale if it’s embedded in a functional, well-regulated, and global climate-change response. To develop that response, we need leadership, and the Pope is delivering on that front. Yet leadership that ignores viable, nuts-and-bolts solutions won’t deliver anything but words, and we have plenty of those.

The full findings are available for free in The Bottom Line: Taking Stock of the Role of Offsets in Corporate Carbon Strategies