Savannahs, prairies, and other drylands aren’t easy places to live – but people have managed it for centuries by building sustainable economies that are compatible with the ecosystem.  It’s a phenomenon that policymakers have largely ignored, and Ced Hesse of the International Institute for Environment and Development says it’s time to fix that. 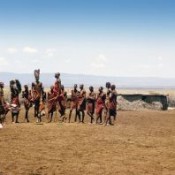 Savannahs, prairies, and other drylands aren’t easy places to live – but people have managed it for centuries by building sustainable economies that are compatible with the ecosystem.   It’s a phenomenon that policymakers have largely ignored, and Ced Hesse of the International Institute for Environment and Development says it’s time to fix that.

This article has been adapted from Ecology, Equity and Economics: Reframing Dryland Policy.   You can visit the original here.

21 February 2012 | Drylands cover two-fifths of the Earth’s land and are home to 2.3 billion people worldwide. They are highly unpredictable ecosystems, characterized by low, erratic rainfall and high inter-annual climatic variability. Pastoralism, agro-pastoralism and rain-fed agriculture are the dominant land uses and livelihood systems, and many drylands support vibrant economies of adjacent communities and environments and provide opportunities for trade, tourism, migration and environmental services such as carbon sequestration.

Drylands can be sustainable and highly productive.   Local people have developed the knowledge, experience, institutions and technologies to harness and make use of the variability and uncertainty that permeates dryland ecosystems.   In the dry rangelands of Africa, the quantity, but more importantly the nutritional qualities, of pastures vary over time and space due to not only erratic rainfall but also different soil types and plant species, and even the different stages of a plant’s growth cycle.

But it is this very scattering of nutritious pastures that makes mobile livestock-keeping — pastoralism — so productive. Through mobility and the careful breeding of animals that can feed selectively on the most nutritious pastures, pastoralists take advantage of the ever-changing concentrations of plant nutrients on the range.   By ensuring their animals feed on a more constant diet of rich pastures, they are highly productive, producing more milk and meat than sedentary animals reared in the same environmental conditions.

And yet, despite the potential productivity of drylands, and the innate ability of local communities to sustain them, nearly half of dryland people live in extreme poverty. And, according to the Millennium Ecosystems Assessment, up to 20 per cent of the world’s drylands are degraded.

Why? The answer lies, to a large degree, in how drylands policy objectives are framed. In Africa and Asia, these are generally expressed as ‘resolving a problem’ rather than developing an opportunity.

Aridity and variability are considered major constraints to productivity. And resource scarcity and degradation narratives dominate policy and practice. These narratives assert that the highly unpredictable and scattered rainfall in drylands leads to scarce, fragile and poor quality resources. These constraints are thought to compel the local communities to over-farm and overgraze their lands, exacerbating degradation and leading to desertification and conflict.

In this context, the policy imperatives have been — and largely remain — to bring order and stability to what are otherwise seen as disorganized and unstable environments, societies and economies. Government and private sector investment for the sustainable development of African and Asian drylands is disproportionally low.

The little investment that has been made tends to focus on either improving or replacing traditional land use practices with what are thought to be more rational, modern techniques. For example, large-scale investments in irrigation, forestry or livestock ranching that are centrally managed.

But such approaches are often inappropriate and end up exacerbating poverty, environmental degradation and conflict. Group ranches in southern Kenya, for example, have undermined the mobile pastoral systems of the Maasai and wildlife, while also contributing to poverty and land degradation. India’s ‘green revolution’ also failed dryland farmers. With the introduction of irrigation in the 1970s to support high-yielding, water-intensive crops farmers became overly dependent on technology and ground water. As wells dried up and water pumps broke down, thousands faced heavy debts, which, coupled with poverty, poor health and family feuds, drove many of them to commit suicide.

Sadly, the lessons from such projects — not only in failing to achieve higher sustained productivity, but also, in many cases, of undermining local livelihood systems — have not been learnt.

Policymakers still interpret practices such as livestock mobility and negotiated and reciprocal access to pastures and water as ‘coping’ mechanisms in response to scarcity, rather than seeing them for what they really are: pro-active husbandry strategies that exploit variability to manage uncertainty and maximise productivity.

Traditional livelihoods and land use systems continue to be seen as inefficient and environmentally destructive. A highly centralised approach to drylands development with limited local participation has compounded the problem, denying governments the opportunity to benefit from local experience.

The environmental degradation narratives have been widely criticised by researchers, practitioners and drylands peoples themselves as conceptually flawed and lacking in empirical evidence.   Yet they have proved remarkably persistent in many national, regional and global policy circles.

Although presented as having an ecological basis, this framing is often driven by political and economic motives.   For example, because pastoral regions in both China and East Africa are usually located far from the seat of power and can be politically unstable, settling communities here is thought to make nation-state boundaries more secure.   In other contexts, tantalising prospects of huge profits from leasing land to foreign investors makes it expedient to blame smallholder dryland farmers or pastoralists for environmental destruction or for insufficient productivity.

The world needs a new narrative for dryland policy — one that is based on ecology, equity and economics; a ‘triple E’ perspective.

This is critical in the context of climate change. Researchers anticipate that climates in many dryland areas will become more variable in the short and medium terms, with more severe extreme weather events, rainfall shortages, and higher maximum and minimum temperatures. Such changes, which will increase uncertainty, pose real difficulties to development, particularly for those poorest communities that lack capacity and resources to adapt to them.

Climate change presents a major opportunity to enhance local, regional and national dryland planning and implement progressive policies that draw on sound scientific information, local knowledge and the wisdom of customary institutions that emphasise social equity, ecological integrity and economic development. Their existing adaptive capacities may not be perfect but dryland people have much to teach us about living in an increasingly uncertain world.

Some policymakers have already introduced more progressive dryland policy and planning. The Ministry of State for Development of Northern Kenya and Other Arid Lands, for example, is designing fiscal incentives to attract private sector investment into the region, particularly in its core resources and in the foundations required to underpin dryland production. It is also developing alternative models for managing and delivering education as well as setting up a National Drought Management Authority and National Drought Contingency Fund. The ministry is integrating climate foresight and adaptation into local and national government planning in a way that explicitly strengthens the strategies used by communities to adapt to climate variability and to reduce and manage the risks from natural disasters.

Integrating climate change into dryland planning in this way will go far in creating a more supportive policy environment for climate resilient development in the drylands.

But it is not enough. Given major power imbalances between local communities, the State and the private sector, all of whom have a stake in drylands, a parallel process for building the capacity of dryland communities and their advocates is also needed. Only by linking evidence-based arguments to political processes, both within country and at a global level, will a shared vision for the drylands be achieved. Climate change offers a chance to build this vision and release the full potential of drylands — what are we waiting for?

Ced Hesse is the Principle Researcher on Drylands at the International Institute for Environment and Development (IIED). He can be reached at [email protected]

This article originally appeared on the IIED Web Site.   Please cite the original in references and consult them for information on reprinting.