Cash-strapped governments around the world are using market mechanisms to keep water clean and prevent a threat that rivals climate change, according to a new report that documents nearly 300 programs involving nearly $10 billion in transactions. It was launched at the 17th Katoomba Meeting in Hanoi. 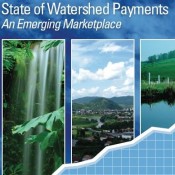 23 June 2010 | HANOI | An innovative market in water quality is rapidly emerging worldwide, as cash-strapped governments in countries as diverse as China, the United States, Brazil and Australia invest billions of public and private dollars in schemes that reward people who protect water resources, according to a new Ecosystem Marketplace report launched today at the Global Katoomba Meeting in Hanloi.

The report, State of Watershed Payments: An Emerging Marketplace, will be available for upload later today and is the first to quantify payments for watershed services that could help avert a looming global water quality crisis.

Calling the water crisis a threat to humanity that exceeds global warming, the authors of the study said that a number of regions of the globe seem to be responding to such frightening indicators as the steady proliferation of “dead zones” in waterways around the world.

In the United States, for example, years of unchecked fertilizer run-off along the Mississippi River have generated algae blooms that have created massive oxygen-starved dead zones in the Gulf of Mexico the size of a small US state.

“Our findings suggest growing awareness by the public and private sectors worldwide of the water quality crisis, and acknowledgement that the problem is too big to be solved by traditional approaches alone,” said Michael Jenkins, Forest Trends President and CEO. “But the billions of dollars that are being spent on strategies aimed at protecting water resources represent only a snapshot of the potential for using market-based incentives to reduce threats to water.”

The report identifies roughly 288 programs yielding an estimated $9.3 billion in payments for watershed protection in 2008. These include payments for watershed services (PWS), in which “land managers” such as farmers and forest communities are paid to maintain water quality, and water quality trading programs (WQT), in which industry and other polluters meet quality standards by buying and selling pollution reduction credits.

Over the last few decades, the total investment was about US $50 billion and affected about 3.24 billion hectares of watershed, which is land that funnels water into major waterways like the Chesapeake Bay in the US and Yangtze River in China.

“Clearly, a global movement is building that could be rapidly scaled-up to reduce water pollution much the same way carbon markets are intended to reduce greenhouse gases,” Jenkins said.

Marta Echavarria, one of the report co-authors, said that EM’s analysis of payments for water services as well as for water trading schemes revealed that many programs around the world are focused on more effective management of forests. Thus, she said it makes sense to link water quality issues to the climate change discussion regarding the use of payments and trading exchanges to reduce carbon emissions from deforestation and forest degradation, or REDD.

“The same activities in forests that can affect climate change also influence water quality and biodiversity as well,” she said. “We need to broaden the lens and look at how payments for environmental services can purchase multiple benefits, from clean air to clean water to biodiversity. Then we can design programs that allow markets to put a value on all of these benefits.”

Trading in Credits for Water Pollution

Water quality trading programs totaled only about US $11 million in 2008, but the authors believe this sector could grow rapidly, much in the way carbon trading has skyrocketed from relatively small investments early in the decade to become a market worth   $144 billion in 2009.

The report highlights the potential for attracting private sector participation by setting up exchanges that would facilitate trading in water pollution credits. Like carbon trading, water trading allows polluters to meet a mandated limit, either by reducing their discharges or by purchasing a credit tied to a reduction achieved elsewhere in the watershed, such as by a farmer, forest owner, or wastewater treatment plant.

“Water trading is poised to expand rapidly as a way to protect water quality,” said Tracy Stanton, Water Program Manager for Ecosystem Marketplace and lead author of the report. “We found a number of programs already well-established, but to see wider adoption we need governments to stimulate the markets by setting clear water quality standards that will drive greater demand for pollution credits. Likewise government is uniquely positioned to help lower the barriers to private sector investors by lowering the perceived risks.”

Most of the 72 trading programs studied in the report are located in the US, but they also can be found in Australia, Canada and New Zealand.

For example, in New South Wales, Australia, the Hunter River Salinity Trade Scheme allocates salinity credits that can be traded among 23 coal mining and power generation facilities as way to meet government-mandated caps on pollution discharge.

The report finds evidence that trading schemes could greatly expand in the US, especially now that the Department of Agriculture has established an Office of Environmental Markets. Already efforts are underway to develop ecosystem markets in the Chesapeake Bay, the Florida Everglades, the salmon habitat in the Pacific Northwest, the forests in the Northeast and in the Ohio River Basin. In addition, China has been conducting water trading pilot programs since the early 1980s and appears to be laying the groundwork around the country for establishing large trading exchanges in ecosystem services and Europe has been developing a trading scheme to combat declining water quality along the Danube.

The authors note that government funds still make up the bulk of payments for water quality, but there are indications of interest from major players in the private sector. Global beverage companies such as Coca-Cola and SAB Miller have been engaged in watershed protection programs for the past several years. And in France, since the mid 1990s, Nestle has paid farmers to manage animal waste and reforest sensitive areas to protect the mineral water used in its Vittel line of bottled water.

“While this type of payment may seem quite small at the moment, this is an area in which we are most likely to see tremendous growth,” says Michael Jenkins of Forest Trends. “After all, if the private sector does not start paying for watershed services, then we are missing an important potential solution to this problem. “

For now, the public sector is funding most of the programs of “payments for watershed services,” and the greatest number of programs are in China and the United States.

In China, for example, where 700 million people lack access to safe water, payments in exchange for watershed protection increased from US $1 billion in 2000 to US $7.8 billion in 2008, and programs expanded from 8 to 47. Thus far, these initiatives have protected or restored 270 million hectares. A significant portion of the payments are subsidies for farmers to reduce their pollution in and around forested areas.   And in the United States, payments for watershed services have grown from US $629 million in 2002 to US $1.35 billion in 2008 and could expand rapidly as the federal government has recently taken unprecedented actions to address critical gaps in watershed restoration polices across the country.

But the authors argue that China and the United States could learn much from innovations introduced in the nations of Latin America, where governments are experimenting with new ways of making payments and new methods for measuring and monitoring their impact.

Latin America has emerged as the global leader in innovative market-based clean water programs. Today, there is a range of local, state, and national initiatives underway in ten countries, led by Costa Rica and Mexico but also including Colombia, Guatemala, and Brazil. In 2009, for example, the Brazilian state of Espirito Santo established a new program that encourages dairy farmers in three river basins to close off pastures in order to improve water quality and flow. Farmers are paid for each liter of milk lost due to the closures, with much of the money coming from water tariffs as well as royalties from oil and gas exploration and hydropower production.

In the nations of Africa the report identified 20 programs totaling about US$62.7 million, though the authors suggest that the number could grow as new initiatives are underway including programs supported by the World Wildlife Fund in South Africa and Kenya.

“We now know that payments for watershed services are no longer a series of isolated incidents,” said Stanton. “Though much remains to be done, we have documented the beginning of a global movement; an emerging marketplace in the protection of water resources.”

Steve Zwick is Managing Editor of the Ecosystem Marketplace. He can be reached at SZwick@ecosystemmarketplace.com.
Please see our Reprint Guidelines for details on republishing our articles.