Latin America leads the world in  REDD activity – and in public-sector peldges to ramp it up. New research shows that those pledges are, in fact, being kept, and in ways that are beginning to deliver verifiable results. Here’s a look at findings from the Forest Trends REDDx initiative. 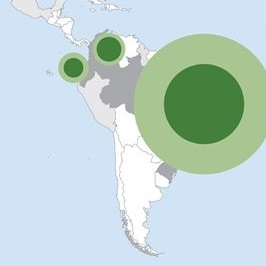 3 April 2014 | Ecosystem Marketplace’s State of the Forest Carbon Markets 2013 report found that 80% of the world’s REDD (Reduced greenhouse gas Emissions from Deforestation and forest Degradation) credits originated in Latin America during 2012, and that Brazil leads the region in funding commitments to REDD.

Beyond that, however, the funding picture has always been a bit nebulous. Until now

Forest Trends’ REDDX Initiative has been following REDD+ finance in 14 countries – six of them Latin American. It finds that, out of $111,334,638 pledged to those three Latin American countries, $54,052,851 – or nearly half – has been delivered to date.

“It surprised everyone,” says Marta Echavarria of Ecuador’s EcoDecision, an organization specializing in ecosystem services markets.

For the full story, please visit the Forest Carbon Portal.

This is the sixth in an ongoing series of articles developed in support of this yearÃ¢â‚¬â„¢s two Katoomba Meetings, both of which are taking place in Latin America. The first meeting took place on March 19 and 20 in Brazil, under the banner Ã¢â‚¬Å“Scaling Up Sustainable Commodity Supply ChainsÃ¢â‚¬Â.

The second meeting will take place in Lima, Peru, over four days Ã¢â‚¬â€œ from April 22 through 25 Ã¢â‚¬â€œ and its working motto is Ã¢â‚¬Å“Climate, Forests, Water, and People: A Vision for Alignment in Tropical AmericaÃ¢â‚¬Â.