More than a third of US forests are family-owned, and most of those owners want to pass their land on to the next generation.  Many, however, fear they’ll be forced to sell out if medical expenses get too high.  In response, a conservation group and a major insurance company have teamed up to assuage that fear – and preserve the forests – by linking the health of families to the carbon in their forests. 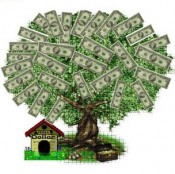 More than a third of US forests are family-owned, and most of those owners want to pass their land on to the next generation. Many, however, fear they’ll be forced to sell out if medical expenses get too high. In response, a conservation group and a major insurance company have teamed up to assuage that fear – and preserve the forests – by linking the health of families to the carbon in their forests.

14 September 2010 | For three days in December, 2007, a major storm hung over Vernonia — a town of just over 2,200 nestled in the forest of northwestern Oregon.   It dropped 11 inches of rain and pushed the Nehalem River over its banks, leaving residents with hundreds of wrecked homes and businesses, several roads completely washed away, and the challenge of deciding how to rebuild.

As Vernonia was suffering from the worst of the floods, Catherine Mater was meeting with family forest owners on the other side of the country.

A senior fellow at the Washington, DC-based non-profit Pinchot Institute for Conservation, Mater has been conducting research for years on the fate of forest lands destined to be passed to the younger generation.   Most current owners are now entering their twilight years, and Mater set out to identify the major pressures standing in the way of keeping America’s family forests healthy.

She was surprised by what she found.

The biggest perceived risks for the health of family forests turned out to be the health of the families themselves.   Through a series of interviews, Mater discovered that unexpected medical expenses were what families most feared would force them to sell their land or liquidate their timber – and that concern hasn’t evaporated with the passage of healthcare reform in the United States.

“We know that there is this crisis of generational shift in land ownership,” she says.   “The underlying concern, healthcare cost, is consistent throughout the US”.

This answer ranked higher than higher taxes or job loss, and Vernonia’s misfortune offered an opportunity to deploy a new solution that could simultaneously secure the forests and provide health care.

In 2009, the town approved a $13 million bond to rebuild the city and develop a sustainable energy plan that could also help recover some of the timber and milling jobs the area has lost with the region-wide downturn in the timber industry over the past decades.   Mater took the green theme a step further: She teamed up with the northwest’s Regence Blue Cross Blue Shield (BCBS) insurance group, creating a plan that would link insurance premiums to the amount of carbon in the trees of Vernonia’s forest owners.

“I had just seen the movie Avatar,” he says.   “This plan resonated with that kind of message: one tree feeding all mankind.”

While recognizing it sounded a bit corny, Mohan says this image helped convince him to finance a study by Mater which showed Pacific Northwest landowners had many of the same fears over healthcare costs she had found earlier with eastern landowners.

The Nuts and Bolts

The money for the scheme would come from companies or individuals seeking to purchase carbon credits to reduce their carbon footprint by paying to store carbon in trees.   Some portion of the money earned would be put directly into a health care fund on behalf of the landowners. The remaining funds would be distributed among the various project stakeholders – including the landowners and project developer.

In order to get paid – whether in cash or in health insurance – these landowners will have to play by the rules of a new market.   This means developing management plans and demonstrating to independent verifiers that their management practices are increasing the amount of carbon captured in trees.

This will likely involve signing up with an “aggregator” who coordinates the efforts of many small land owners into a single project and chooses to follow a particular standard from organizations such as the Climate Action Reserve, the American Carbon Registry or the Voluntary Carbon Standard, each of which has its own rules for earning carbon credits from improved forest management (IFM).

Although each standard has different rules for what is required of the forest owners, the basic hurdles are fairly common.   Generally speaking, each landowner is compared against a “baseline” that assumes the most likely use of the land would be the maximization of income from timber allowable under the law.   The landowner then gets credits based on the number of metric tons of carbon that their forest stores above this “baseline” as verified through independent forest inventory audits.

At a meeting on August 19 in the newly-rebuilt gym of Vernonia high school, family forest owners from around the county showed up to hear Mater and Alexis Hoffberger, a BCBS representative, speak on the potential to link up efforts to keep the landowners forests healthy with payments into Health Savings Accounts program.

Mike Pihl, a long-time resident of Vernonia and contract logger, attended the meeting. With his livelihood tied to the timber industry, Pihl says he is “interested as a forested land owner, as a citizen, and as a member of a low income community.”

Sharon Bernal, a Vernonia resident who chaired the committee to pass the $13 million bond to start Vernonia’s green re-birth, has high hopes for Forest Health project, and is trying to reach out and educate forest owners in the region, starting with her father.

At 73 years old, he is one of the many older forest owners in Columbia County who, as Bernal believes “need to be educated, to understand what this plan means.” That generation, who will soon be passing their forests down to their children, may stand to benefit the most from a plan that would bring healthcare services to the isolated rural community.

This market is not entirely new to Oregon.   Earlier this year, Portland-based Ecotrust announced a landmark carbon deal.   Even as far back as 2009, the Oregon Small Woodlands Association (OSWA) partnered up with the American Forest Foundation to launch Woodlands Carbon, a program that enrolled small forested land owners under another climate standard, that of the Chicago Climate Exchange.   The former director of OSWA, David Ford, even stepped in to briefly explain the forest carbon landscape at the meeting in Vernonia’s high school gym.

Despite the growing experience with carbon markets and the bounty of the Pacific Northwest’s forests, getting the money for forest carbon projects is still not quite as simple as some would like.   The stalling climate-change policy efforts at federal, regional, and state levels in the US have pushed down the price buyers are willing to pay for carbon credits.

Unfazed, Regence BCBS and The Pinchot Institute remain committed to testing a plan that could mean support for in-home care for Vernonia’s elderly citizens, post-natal care for recent mothers, and help stop the bank-breaking costs from unexpected emergencies that have forced families to sell off their land to simply get the market value for timber.

Speaking to Oregon Public Broadcasting the day of the local meeting, Mater described momentum to keep the plan moving.

“We do have carbon investors on board who have indicated they are interested in this,” she said. “They want to move to the next phase.”

The Bigger Picture for Family Forests in America

The Pacific Northwest is not alone when it comes to getting a grip on the pressures facing family forests.   56% of US forests are on privately-owned land, with 35% being family-owned – about 264 million acres.     Of these, more than 60 million acres have been reported by the owners to be going up for sale in the near future.

And there’s not just one reason forests are disappearing: suburban expansion, road construction, unsustainable logging, forest fires, pest infestations and disease all contribute to the decline. The diversity of issues leading to deforestation makes it difficult to impose a one-size fits all solution.

The diversity of forest pressures is compounded by the fact that there are thousands of family-owned plots of land with small parcels of forests – 100 acres or less. As the current generation of landowners ages and the next generation appears to have limited interest or expertise to manage these forests, finding a way to make these forests more valuable standing than clearcut or converted to housing developments is a major hurdle.

Keeping it in the Family

More than 60 million acres of family forest land is owned by people who intend to sell or transfer their land soon. This could be inherited by family members or potentially sold off to developers or logging interests. With eighty-six percent of those intending to sell or transfer their land are 75 or older, addressing concerns of the current and future generation of forest owners is vitally important to keeping those 264 million acres in the hands of families, who are some of the best stewards of forested land.

In the meantime, Mater has been developing relationships with other organizations who are keeping a close eye on the program to see whether it could be expanded to other regions. Implementing a similar program in the southern and eastern US is a few years away, if it happens at all.

But, as Nair says, “We will deploy our own conviction in this experiment, and then worry about the conviction of others.”

Vernonia is being used as a pilot test, with Nair, Mater, Ford, and even Oregon State Senator Betsy Johnson, hoping for a successful outcome. With so many complex moving parts – carbon payments, inheritance laws, healthcare rules – the plan needs to be evaluated further.

“We have to get deep with this study,” says Nair. “If you ask a kid if he wants a bicycle, he’ll say yes. But if you ask him how much he would pay for it, or tell him he can only buy a certain kind, the answer may change.”

Phase one gauged interest and feasibility, with positive results. Now, phase two hopes to implement the program with some 300 forest owners in Columbia County, with an outcome expected by the end of 2011.