The Electric Power Research Institute (EPRI) is holding a public auction to sell the stewardship credits generated during the Ohio River Basin Water Quality Trading Project’s pilot phase. While success isn’t certain, developers of the historic project are sure significant lessons will be learned in terms of moving forward with water quality trading. 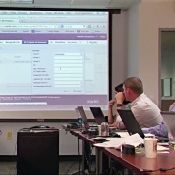 12 February 2015 | The Ohio River Basin Water Quality Trading Project has reduced nutrient pollution by nearly 100,000 pounds between 2013 and 2015. That’s the equivalent of preventing almost 3,000 50-lb bags of fertilizer from going into the water.

That was during the project’s pilot phase where farmers implemented conservation practices like rotating cover crops for soil health and installing treatment wetlands near milk houses to absorb manure before it flows into waterways. These activities have been organized into stewardship credits, a quantified reduction of a pollutant, the nutrients nitrogen and phosphorous, that has been verified by state agriculture and permitting agencies. One credit represents one pound of nutrient pollution.

Now, it’s time for trading these credits among businesses, municipalities and even individuals looking to offset their environmental impact. The Electric Power Research Institute (EPRI), the nonprofit that initiated the trading project, has organized an auction for these stewardship credits to take place on April 16th in New York City.

Reaching the point where the project is ready for an auction to purchase credits is a big milestone. EPRI has been in discussions over this idea since 2007 and initiated the Ohio River Basin Water Quality Trading Project in 2009. It operates through farms that generate stewardship credits, which keep nutrients out of the river. Power plants, sewage facilities and many others, then, purchase these credits.

Initiating the project and implementing the conservation involved building a network of federal and state agencies, municipalities and private sector companies while simultaneously working with individual farmers within the Ohio Basin. In August of 2012, Ohio, Kentucky and Indiana signed on to the plan making it the world’s largest and only interstate water quality trading project. At full scale, the project could create a market that fits eight states, 46 power plants, thousands of wastewater utilities and 230,000 farmers. And as Ohio is the largest tributary to flow into the Mississippi River, the project’s success has much larger implications than just the Ohio Basin or the Midwest.

As many components of this project are a first, the April auction will be one as well.

“We’re looking for the most efficient and easiest method for people to participate,” says Jessica Fox, a program manager at EPRI and the lead on its water quality trading efforts.

She says they want as many people to be able to participate in the process as possible-even one person looking to offset an individual environmental impact.

However, this first auction is somewhat to test the method, which means more rules apply. For instance, there is a maximum of 40 buyers and it’s in-person. Forty people will be in NYC sitting in front of laptops making bids and buys on 100,000 pounds of nutrient pollution. Participants will be able to see the stewardship credits available through the project’sonline trading registry. And it’s an open auction so buyers will be able to see everyone’s bids.

Fox says they chose an open auction because of its competitive nature. They want the acknowledgement they can share with stakeholders and everyone that they’re doing something good for water and the ecosystem, Fox says. It’s an instantly gratifying experience for the buyer because the purchase is made public right away. There is even a picture of the farm that generated each credit as part of the registry. And hopefully, in the process of wanting to make an impact and earn that recognition, participants will feel compelled to beat out other bidders by bidding each other up.

This competitive component shouldn’t be too hard to deliver on. EPRI hopes that half of the participants will be corporations-many of them likely competitors in the business world. While the other half could be corporates, they could also be made up of NGOs, municipalities or-as said-individuals.

The April event is not only to test out the auction setting but also to gauge interest of potential participants. There is a discussion going on at an academic level regarding purchasing credits to meet sustainability goals, Fox explains. And the auction will measure movement on this discussion. “It’s where the rubber hits the road,” she says.

The plan is for this auction to evolve into online auctions allowing for more participation and convenience.

In the world of environmental markets, there is much uncertainty. This project, however, offers that elusive security ensuring the buyer is making a true impact. It offers more rigor and visibility than any project out there, Fox says. “I’m not saying this might be a good thing,” she says regarding what she tells potential buyers. “I’m saying you buy these credits now and you’re going to be linked to the actual farm that generated these units. That’s powerful.”

Because at the end of the day, the project is about conservation and the ultimate bottom line of the auction is to fund more conservation activities on the ground in the Ohio River Basin. Fox mentioned that she has already heard from several farmers ready to implement conservation work but are just waiting on finance.

Early this year, EPRI also won the prestigious US Water Prize for the Ohio Basin project, which Fox likens to receiving approval from a third party auditor. “Hopefully, the award gives credit buyers more confidence in the project,” she says.

The award gives Fox and her team a boost of confidence as well. They are entirely aware, however, they could be ahead of public thought and the time isn’t now for purchasing stewardship credits. They’re aware the auction might not be a success.

Fox says either way, EPRI will learn from the outcome. Of course, the goal is to sell as many stewardship credits as possible, but, ultimately Fox says the objective of the auction is to have a good learning experience.

“We want to learn from our successes and failures and have other people learn from them as well to figure out how to do it going forward,” says Fox.

And for this project, moving forward means transitioning from a pilot into a full-fledged operating marketplace.