Deutsche Post DHL is a major player in the logistics industry which means it’s also a big contributor to global carbon emissions. To account for its environmental impact, the business has initiated an emissions reductions program based on carbon offsets and efficiency that will cover the company’s large indirect sources of emissions. 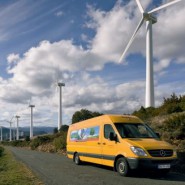 Deutsche Post DHL is a major player in the logistics industry which means it’s also a big contributor to global carbon emissions. To account for its environmental impact, the business has initiated an emissions reductions program based on carbon offsets and efficiency that will cover the company’s large indirect sources of emissions.

17 December 2013 | When you think of globalization, you might think of a South African using an iPad; an Italian drinking Guatemalan coffee; a Canadian eating a mango in February. All of these things are made possible by the logistics industry, and Deutsche Post DHL is one of the sector’s biggest players. Headquartered in Germany, DHL ships to 220 countries and delivers 65 million letters and 3 million parcels every day. The company’s emissions amounted to 28 million tonnes of carbon dioxide (tCO2) in 2012 – roughly equivalent to the emissions of Puerto Rico. The bulk of these were so-called “Scope 3” or indirect emissions from the subcontractors that actually transport DHL’s shipments. (Scope 1 refers to direct emissions from any fuel DHL combusts and Scope 2 refers to emissions from the energy DHL uses in their buildings.)

Globalization is indeed taking its toll on the atmosphere: the logistics industry overall contributes a fifth of man-made greenhouse gas emissions, according to the UN Framework Convention on Climate Change. “Carbon emissions are the main environmental impact of our business,” says Daniela SpieÃƒÅ¸mann of DHL’s GoGreen program. GoGreen was created in 2006 to address a difficult question: How do you reduce carbon emissions when burning fossil fuels to move goods from here to there is the essence of your business model?

Some transportation sector companies are using offset purchases as part of their answer to this question, which is why transportation buyers held 11% of market share for forest carbon offsets in 2012, according to our State of the Forest Carbon Markets report.

Because so many of its emissions are from “Scope 3” activities, DHL has approached emissions reductions through a kind of burden-sharing model: The company has committed to reducing its emissions, but its employees are also engaging customers around internalizing the environmental costs of their shipments. On the company side, DHL has a binding target for all business divisions and across all three scopes to improve carbon efficiency 30% by 2020, using 2007 emissions as the baseline. As of last year, it was already more than halfway there.

On the customer side, DHL’s GoGreen program offers businesses several levels of CO2 reporting, from simple data to a customized ‘carbon dashboard’ that uses ‘what-if’ scenarios to show customers how to optimize their supply chains – by packing in more parcels per vehicle, taking more direct routes, etc. For those customers that want to go to the next level, DHL offers a carbon neutral option that uses offset purchases to cancel out the emissions of a shipped parcel entirely – the bulk of which are scope 3 emissions from transporting the good from sender to receiver. The GoGreen campaign is additional to the carbon intensity target, meaning that the offset purchases are not included in the 30% emissions reduction goal, but rather go beyond it.

The opt-in model of customer offsetting is common in the transportation sector, and it has some distinct advantages. From the customer perspective, offsetting is simple: DHL vets high-quality offset projects through a tender process, handles the contracts, and provides GoGreen branding materials. From DHL’s perspective, the offset program engages customers around the company’s sustainability goals while passing off the majority of the cost of the actual offset purchases to them. It’s a win-win.

The cost of sending a parcel carbon-neutral differs by country – in some it’s a set fee while in others it’s a small percentage of the overall cost of the shipment – but in Germany, cancelling out the emissions of shipment costs customers under 10 euro cents (about USD$0.13) extra for a parcel. A critical question in any opt-in program is how many customers are going to ‘check the box’ to pay that premium. At first, the GoGreen carbon neutral program saw almost exponential growth. In 2006, DHL offset about 1,000 tonnes on behalf of its customers. By 2010, that number had jumped to 80,000 tonnes, and reached 180,000 tonnes in 2012. Now, the growth seems to be plateauing, to around 200,000 tonnes in 2013. The shape of the opt-in curve over time may be indicative of whether there is a ‘glass ceiling’ on interest in voluntary carbon offsetting – perhaps only a certain subset of customers will ever be interested.

The opt-in model also reveals customer preferences around the varying ‘charisma’ of different carbon project types. In part because its program is customer-facing, DHL looks for both diversity and human connections in choosing offset projects: “We’re pushing for projects that are linked to local populations and local families,” SpieÃƒÅ¸mann says. “We try to bring in different technologies and different regions as well.”

As a result, the GoGreen offset projects are spread across the globe, from wind power projects in China and Nicaragua to a landfill gas project in Turkey to efficient stoves in Lesotho and water purifiers in Cambodia. DHL has a single forestry project in their portfolio – a reforestation project in Uganda that incentivizes small groups of subsistence farmers to plant trees.

However, the progression of standards such as the Climate, Community and Biodiversity (CCB) Standard that can be “stacked” onto carbon verification to certify co-benefits gave the shipping company more confidence in forestry. Two years ago DHL added the Uganda reforestation project to their portfolio. They joined many other buyers in demanding certification of co-benefits: In 2012, 12.2 million of the forest carbon offsets transacted – nearly half of the market – achieved both Verified Carbon Standard and CCB certification.

DHL also surveyed its customers about what project types they preferred, and forest projects rated well. “When you’re promoting carbon offsets to customers, often you simply don’t have much time,” SpieÃƒÅ¸mann says. Marketers explaining the GoGreen offset products frequently find that forestry projects are among the simplest to explain: “A tree is planted and you bring down the emissions” is a straightforward pitch.

DHL’s preference for Gold Standard projects (which overall sold at an average of $9/tonne in 2012) demonstrates its willingness to pay a little more for high-quality offsets. The company makes a Goldilocks-like decision when looking for offset prices: they want to keep the projects affordable for customers, but too-low prices make them skeptical that a project may be overselling its impact. Generally, though, high standards and well-selected projects are linked to higher costs. “Customers expect us to find the balance,” SpieÃƒÅ¸mann says.

Part Three: Deutsche Post DHL: Neutral If You Choose shows how an international logistics company engages customers around valuing emissions-free shipping – and why they’ve come around to forestry.

Part Four: Macmillan: Low-Carbon Courage shows how a publisher rejected greenwashing and went on to slash emissions along its entire supply chain, using offsets only for the ‘last tonne.