Covering New Ground, Ecosystem Marketplace’s new State of the Forest Carbon Markets report launched today in London. Among the findings in this year’s report include market growth by 9% and a growing interest from the business community in payment schemes that protect forests. Also in 2012, the amount of forest conserved by carbon finance grew to 26.5 million hectares. 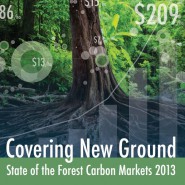 Covering New Ground, Ecosystem Marketplace’s new State of the Forest Carbon Markets report launched today in London. Among the findings in this year’s report include market growth by 9% and a growing interest from the business community in payment schemes that protect forests. Also in 2012, the amount of forest conserved by carbon finance grew to 26.5 million hectares.

These projects, a key defense against the ecological and socio-economic impacts of climate change, were financed by the sale of 28 million tonnes of carbon offsets, according to the 2013 State of the Forest Carbon Markets report released by non-profit researchers Forest Trends’ Ecosystem Marketplace this week in London.

Representing 162 projects in 58 countries, the report tracks forest carbon management over a land area larger than Ecuador. While market size grew 9%, the global average price for forestry offsets was $7.8/tonne – down from $9.2/tonne in 2011, but still higher than prices paid by voluntary buyers for other offset types ($5.9/tonne).

Multinational corporations driven by responsible business ethics and a desire to show leadership on climate change bought two out of every three forestry offsets sold. The top buyer sectors ‒ energy, agriculture/forestry and transportation ‒ depend on forests’ ecosystem services (e.g. clean water) for their business, and some view investments forest carbon investments as a kind of insurance against direct exposure to climate risks.

“Private businesses increasingly recognize the numerous climate risks to their security of supply and producer livelihoods,” says Forest Trends president and CEO Michael Jenkins. “This reports demonstrates what industry first-movers already know, that financing forests’ conservation and sustainable management is not just about license to do business, or image. It can directly benefit companies’ infrastructure, suppliers, and bottom lines.”

Projects that reduce emissions from deforestation and degradation (“REDD”) saw heightened demand in 2012, as private companies like The Walt Disney Company and clothing brand Puma invested millions to support REDD projects in developing countries. A total of 8.6 million REDD offsets were transacted, tying with tree planting activities as 2012’s most popular project types. Projects that improve forest management climbed in popularity, while carbon finance for sustainable agriculture remained muted. Yet, the private sector and negotiators are increasingly attentive to agricultural carbon projects’ strong business case and benefits to avoided deforestation.

“In most regions, unsustainable smallholder or commercial agriculture is a primary driver of deforestation that projects in our survey are trying to address,” says report co-author and Ecosystem Marketplace Associate Director Molly Peters-Stanley. “So it’s no surprise that land-use experts, donors, and communities themselves, are pushing climate-smart agriculture and its symbiotic ties to forest protection to the front of the climate agenda.”

Offset buyers strongly supported forest projects that deliver benefits beyond carbon sequestration, such as alternative local livelihoods and habitat protection for threatened species. Projects reporting community-held land tenure covered 13.7 million ha and were valued at more than $70 million, representing a particular interest in projects that benefit smallholders. Projects that actively monitored their social and environmental gains were behind 61% of offsets sold. Likewise, the market’s most popular third-party project standard, the Verified Carbon Standard, was rarely utilized without dual certification to the Climate, Community and Biodiversity Standards.

Even with strong growth in forestry offset demand in 2012, forest project developers reported 30 million tonnes that remained unsold at year’s end. Though developers predict strong market growth, their projects’ emissions reductions are expected to outstrip historical offset demand, with developers expecting to reduce another 1.4 billion tonnes of emissions over the next five years. Most of these reductions will come from REDD projects.

As market participants admit, finding a home for these offsets will ultimately hinge on regulation. United Nations member states will convene in Warsaw next week to continue negotiating a post-Kyoto Protocol international climate agreement, which has previously stumbled on the topic of monitoring of REDD activities. Some observers believe that overcoming this hurdle is key to progressing toward a new agreement in 2015.

The State of the Forest Carbon Markets 2013 is publicly and freely available thanks to support from the report’s Premium Sponsors: the Program on Forests (PROFOR), the World Bank Biocarbon Fund, Face the Future, and New Forests; Sponsors: Althelia Ecosphere and Baker & McKenzie; and additional support from the UK Forestry Commission’s Woodland Carbon Code – all of which enable Ecosystem Marketplace to explore developments on the frontier of ecosystem service finance.