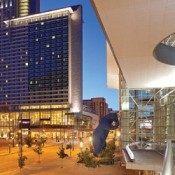 7 May 2014 | DENVER | Before turning over the reins to incoming president Wayne White, standing president Doug Lashley spoke about NMBA progress this year, noting the ongoing need for hard data in persuading regulators and continued lobbying efforts. Committee updates also stressed the need for transparency and demonstrated outcomes, in addition to noting some key policy goals and an emphasis on partnerships with the non-profit world.

Wednesday morning also began with two forums discussing hot topics in the industry. The conversation varied from the range of credit prices to creating dual banks for stream and wetland mitigation, but it seemed to center on inconsistencies regarding regulations in different locations. Bankers would like to see the same regulatory structure throughout the US.

In the Arid West, Finding Water for Wetlands

The post-lunch session found us in a panel on water rights and wetland banking. Karen Henderson of Porzak Browning & Bushong LLP and Dick Wolfe, the Colorado State Engineer and director of the state Division of Water Resources offered an overview of the complexities of working within Western water law and the legal and regulatory requirements bankers need to know about: like the difference between “tributary,” “nontributary,” and “not nontributary” designations for groundwater. (Don’t ask.)

Meanwhile, Ed Zink, owner of the Animas River Bank in Durango has found some interesting work-arounds: his bank does a remarkably good job of harnessing the annual water cycle to create an aquatically self-sustaining bank in the arid Southwest, without much need of active supplementation. The bank, located on a ranch Zink’s family has owned for 97 years, relies in large part on precipitation, tributary runoff and river levels. Snow typically keeps the ground wet in March, followed by peak runoff from a local tributary in April. The Animas River then usually reaches high levels in May and June. Some additional irrigation may be still needed, requiring a water right, though the bank also benefits from irrigation runoff. Lands surrounding the wetland continue to be farmed via flood irrigation, and are under easement along with the bank.

Still, in the arid West, you never get to entirely stop worrying about water. Both Zink and Wolfe noted that climate change may make an already-complicated situation even more so, in a place where 60 percent of streamflow leaves the state to meet downstream obligations and annual precipitation can vary considerably. Highlights: “Wetland banking is like Catholic School – you get really good at following rules.” – Ed Zink

Meanwhile, in a concurrent session, Travis Hemmen of Westervelt Ecological Services, a company offering mitigation services-one of which is banking-says the problem between government program habitat conservation plans (HCPs) and conservation banking is perception. Both provide high quality long-term conservation. But as of right now, HCPs can eliminate the incentive to invest in banks or eliminates demand for credits in an area. It’s poor governance to let a government program take business from the private sector, says Hemmen. He also highlighted the fact that banking projects benefit the local economy because they employ several local employers. However, there is also the perception that mitigation banking is the more costly initiative and bankers will buy up land in an area and then drive up the price of mitigation for companies. But with better communication as well as mitigation policy, Hemmen believes the two can coincide.

In the video, Hemmen describes actions he believes will help solve this problem.

Next up was a presentation on SAGE (systems approach to geomorphic engineering)-and how the program is considering enlisting mitigation banking as a partner in securing funds and developing green and natural infrastructure in coastal regions. Karen Penn, a Climate Coordinator with the National Oceanic Atmospheric Administration (NOAA) explained how SAGE came to be. A group of policy experts, practitioners, NGOs and others studying coastal ecosystems were looking for a new approach to protecting the coast-where 50% of Americans live-from the influx in extreme weather events. They came up with the idea for SAGE- a systems approach that thinks about coastal ecosystems as a whole and integrates green and natural solutions to the infrastructure challenges these coastal areas face.

Steve Glomb, the Director of the Office of Restoration and Damage Assessment within the Department of Interior (DOI) also spoke on partnering with the mitigation industry. The partnership would be with the Natural Resource Damage Assessment and Restoration Program (NRDAR), an initiative that restores natural resources that have been injured by oil spills and other accidents. Glomb offered potential benefits of collaboration. The NRDAR could learn from the mitigation banking system that delivers high quality long-term conservation. Possible activities include credit stacking and buying existing credits where there is still impact happening. However, Glomb stressed that in order for the NRDAR to implement restoration, the work must be directly linked to the injury. Mitigation banking is a good option and has the potential to make a good partner for the program, but, Glomb says, it isn’t likely banking will ever be a requirement under the program.

We broke this out into a separate string, which you can follow here.

Up tomorrow: Emerging markets, candidate species, and the future of bankingÃ¢â‚¬Â¦