Healthy mangroves offer double protection against climate change: they slow it by sucking massive amounts of carbon from the atmosphere, and they help us adapt to it by protecting coastal areas from storms – yet no formal mechanism exists for capturing the economic value of these treasures.  A diverse network of individuals aims to change that in Cancun. 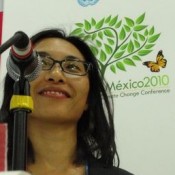 Healthy mangroves offer double protection against climate change: they slow it by sucking massive amounts of carbon from the atmosphere, and they help us adapt to it by protecting coastal areas from storms – yet no formal mechanism exists for capturing the economic value of these treasures.   A diverse network of conservationists, scientists, and policymakers aims to change that in Cancun.

2 December 2010 | CANCUN | Mangroves have been making headlines in Cancun this week, in part because of new research showing they sequester up to 50 times as much carbon per hectare as do tropical rainforests (see “Capturing and Conserving Natural Coastal Carbon”, right), but also because of reports like the Global Biodiversity Outlook 3 (GBO-3), which highlighted studies estimating that every hectare of mangrove fringe along Mexico’s Gulf of California contribute an average of US $37,500 per year to fisheries while every kilometer of mangrove coastline saves the area roughly US $300,000 in coastal protection.

The Unappreciated Value of Mangroves

A recent flurry of studies and position papers have pointed out that mangroves not only reduce emissions from greenhouse gasses, but also help protect people along the coast from rising sea levels and ever more violent storms.

The United Nations Framework Convention on Climate Change (UNFCCC) explicitly aims to promote activities that both reduce emissions (“mitigation”) and help people adapt to climate change (“adaptation”), but the only nod to mangroves is an obscure provision for rewarding small-scale tree-planting in wetlands.   As a result, mangroves are being destroyed at a rate of 1-2% per year, often to make way for luxury resorts, shrimp farms, and other projects offering short-term profits at the expense of the ecosystem on which the activities depend.

“We have been extremely unsuccessful in reversing these trends,” says Eveline Trines, co-owner of forestry consultancy Silvestrum.   “That is probably because so far there has been a serious lack of incentives.”

She is one of more than 40 wetland scientists, economists, policymakers, and businesspeople from all five continents who have endorsed the Call To Action Protecting Mangroves for Climate Change Mitigation and Adaption, which was formally announced Wednesday evening at the 16th Conference of the Parties (COP 16) to the United Nations Framework Convention on Climate Change (UNFCCC).

“We know from the Southeast Asian Tsunami and Hurricane Katrina that areas with mangroves had reduced damages and injury,” says Winnie Lau, who runs the Marine Ecosystem Services Program (MARES) of nonprofit environmental NGO Forest Trends (publisher of Ecosystem Marketplace) and is spearheading the effort.

“We have seen from previous interventions that mitigating climate change by re-establishing mangroves is also a good adaptation strategy, because we are restoring the coastal defenses and helping people to survive,” says Trines, whose company is helping food giant Danone develop methods of capturing the economic value of mangroves for its own supply-chain management.

The Call to Action urges negotiators to embed mangrove protection in the concluding text of COP 16, setting in motion the development of science-based methodologies for measuring, reporting, and verifying the amount of carbon captured in mangroves and the impact of human action on that carbon.   That, in turn, will lay the groundwork for schemes that make it possible to offset industrial emissions by saving endangered mangroves or reviving degraded ones.   Such schemes are also being considered under voluntary carbon schemes.

“There is also a new section, for instance, being introduced soon in the Voluntary Carbon Standard (VCS) on peat land re-wetting and conservation,” says Trines.   “This is a step along the lines of including wetlands in conservation schemes.”

The Call is accompanied by specific language for negotiators to insert into emerging climate-change accords, which are exploring ways of reducing reducing greenhouse gas emissions by promoting good land stewardship.   The bulk of these efforts fall under REDD+, the acronym for schemes that reduce greenhouse gas emissions from deforestation and forest degradation as well as sustainable forest management and other activities.   As more research identifies more ways to lock carbon in the ground or in plants, the scope of REDD+ has been expanding.

“The stated goal of REDD+ is to reduce emissions from deforestation, and mangroves have high sequestration rates,” says Lau.   “They’re also important for coastal developing countries’ adaptation strategies as seas rise, so if you’re a delegate, we urge you to read this text and bring it up in meetings – and if you aren’t a delegate but know some, pass this on to them.”

Ideally, the language being circulated with the Call to Action will be included in text being worked out in the UNFCCC’s Advanced Working Group on Long-Term Cooperative Action (AWG-LCA), which is the negotiating track charged with developing a new treaty to replace the Kyoto Protocol.   Within the AWG-LCA, the Subsidiary Body for Scientific and Technological Advice (SBSTA) is charged with determining which methodologies are scientifically sound.   It normally does this by requesting assistance from the Intergovernmental Panel on Climate Change (IPCC), and the document calls for an IPCC expert meeting to examine the science behind mangrove preservation.

“This legal language has been written in a format that can be plugged right into the decision text of SBSTA at the conclusion of the the COP,” says Trines.   “We can use all the help we can get in distributing it, but it will be made available to parties as well and to the secretariat – all the people who are working on the LCA text.”

The Call began to take shape in August when Lau was planning a Katoomba Workshop in La Paz, Mexico, in partnership with the Mexican Fund for the Conservation Nature (Fondo Mexicano para la Conservacií³n de la Naturaleza, “FMCN”).   The La Paz workshop was a follow-up to Katoomba XVI, the 16th Katoomba Meeting, which took place at the Moore Foundation in Palo Alto, California, in February, 2010.

Lau floated the Call to Action at the workshop in the first week of November, and the current draft reflects input from stakeholders in Africa, Latin America, North America, Europe, Asia, and Australia.