Successful marketing of acai berries and other “superfoods” has stoked demand for other forest products harvested sustainably by indigenous people of the Amazon. But harvesting means nothing if they can’t get to market. That just became a whole lot easier. 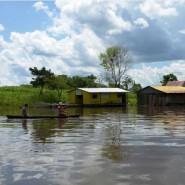 10 April 2015 | In the heart of the Peruvian Amazon, indigenous people are harvesting sacha inchi — as they have been for 3,000 years. And on screens around the world, Dr. Oz, among others, touts the nut-like seed for its high nutritional value and delicious flavor. It’s fast becoming a grocery store favorite: roasted, covered in chocolate, tamari-flavored, or pressed into oil.

Three thousand years, however, is a long time to wait for anything, especially in a global market hungry for the next “super food,” the next quinoa. And for many similar products from the Amazon, the wait is getting a lot shorter, thanks to a project called “Putting Amazon Indigenous Producers on the Map.”

The online database aims to connect indigenous farmers of sustainable natural products with buyers (like food or cosmetic companies), investors, and donors. “Putting Amazon Indigenous Producers on the Map” comprises a catalog and interactive map of community enterprises, ranging from the production of well-known commodities like cacao, coffee, Brazil nuts, and palm hearts to products new to the global market, like Peruvian sacha inchi and camu camu, an Amazonian fruit that contains 30 to 60 times more vitamin C than an orange.

Four organizations — Forest Trends (publisher of Ecosystem Marketplace), the Environmental Defense Fund (EDF), EcoDecision, and the Coordinator of Indigenous Organizations of the Amazon River Basin (COICA) — are developing the catalog and the map to help improve access to markets and finance for Amazonian indigenous communities, making it easier for buyers, funders, and other allies to find suppliers and products.

Across the Amazon, indigenous communities have long harvested non-timber forest products and cultivated traditional crops, both for their own consumption and for sale. Responsible trade in this vast array of products can have profound impact on two fronts. First, such transactions can make a significant contribution to indigenous communities working to conserve their forests and generate alternative sources of income. The conservation efforts of these communities have impact far beyond the forests in mitigating climate change, as a study released jointly by the World Resources Institute (WRI) and Rights and Resources Initiative (RRI) revealed last year. The report found that indigenous people in forest communities and their management of these forests are critical to controlling and eventually diminishing carbon emissions in the atmosphere.

Second, more investors and donors are looking to provide finance to these communities and are seeking viable ways to do so. Plus, for buyers of products like sacha inchi, such trade aligns with a growing body of corporate commitments to deforestation-free sourcing. (For further information on these commitments and other sustainability and supply-chain issues, go to Supply-Change.org.)

This kind of far-reaching success can be found in the relationship between the Yawanawa people of Brazil and the beauty company Aveda. Since Aveda started sourcing the pigment of the urukum plant — commonly known as annatto and once used as war paint — from the Yawanawa more than 20 years ago, it has been a win-win situation for both. For the Yawanawa, the income and support from Aveda has enabled them to reestablish and strengthen their traditional culture, which had been nearly wiped out from the devastation wrought by rubber plantations, the influence of missionaries, and old-world diseases against which the native Americans had no resistance. The community is now thriving, working toward sustainability and economic independence. For Aveda, working with indigenous communities has become a central link in its supply chain, as well as a key part of its brand identity.

For many companies seeking to follow such a model, however, the initial hurdle of even connecting with a producer can be a challenge. Often, companies have difficulty identifying and evaluating partners for investment and sources of supply because community enterprises can be small scale, dispersed, and relatively inexperienced in using the Internet and other tools to enhance their visibility. That’s where “Putting Amazon Indigenous Producers on the Map” comes in, making that vital first connection.

The database and interactive map includes information gleaned from direct contact with Amazon indigenous producers, with input from Amazon indigenous organizations belonging to COICA, from development partners across the region, and from a unique crowd-sourced mapping tool (http://indigenousmap.canopybridge.com/). The database includes:

The first phase of “Putting Amazon Indigenous Producers on the Map” includes data collection through August 2015, with database information to be available on a searchable, map-based platform online as well as through detailed profiles of producers on the CanopyBridge.com platform.

Support for “Putting Amazon Indigenous Producers on the Map” comes from the United States Agency for International Development (USAID) as part of a 5-year program called Accelerating Inclusion and Mitigating Emissions (AIME), involving a partnership of nine environmental and indigenous organizations, led by Forest Trends. The AIME program supports empowerment of forest-dependent communities to more fully contribute to and directly benefit from climate-change mitigation efforts.

So even as sacha inchi flies off the shelves of Whole Foods, this kind of investment points to a much bigger picture, more far reaching than simply providing a tasty snack for adventurous eaters. The global market for Amazonian products could have powerful impact on some of the most pressing issues of our time, like fighting climate change and women’s empowerment.

Just ask the people at the Association of Waorani Indigenous Women of Ecuador, a cooperative in the Ecuadorian Amazon. They stopped selling bush meat – which placed unsustainable pressure on the community and the environment – and started growing cacao in 2010. Since then, they have revitalized their community. Their sustainable farms – all run by women — have restored the jungle cover and the animal population that was destroyed by bush meat production. The Waorani now have better access to health, education, and housing resources, with women especially benefiting. The cooperative aims to build a bridge between Waorani traditional ways and the contemporary world.

Thanks to the database “Putting Amazon Indigenous Producers on the Map,” it may get a lot easier for you to enjoy their chocolate — and support this community.

Ann Espuelas is a writer for Forest Trends.