Water shortages could dampen corporate profits around the world, but that could actually be good for the world’s poor – if companies recognize that water risk is shared by all and use their clout to promote sustainable water stewardship.  Nearly 90% of companies in one survey said they recognize the risk, but few seem to agree on how to quantify it. 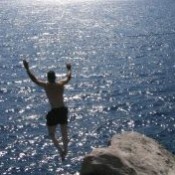 Water shortages could dampen corporate profits around the world, but that could actually be good for the world’s poor – if companies recognize that water risk is shared by all and use their clout to promote sustainable water stewardship.   Nearly 90% of companies in one survey said they recognize the risk, but few seem to agree on how to quantify it.

First of a Two-Part Series

16 May 2011 | Marcus Norton knew that water stress was going to hit companies hard in the coming years, but he was still surprised by the results of a survey that the program he heads, CDP Water Disclosure, conducted throughout last year.

“We had 39% of companies report that they have already suffered detrimental impacts from water,” says Norton.   “For me, that was quite a surprising number.”

CDP Water Disclosure was launched by the Carbon Disclosure Project (CDP) in 2009.   Late that same year, it sent the first annual survey to a subset of Fortune 500 companies.

The second annual survey was sent out in November 2010, sponsored by a group of 354 investors whose assets total US$43 trillion and who have good reason to pay attention to the companies that are monitoring and managing water supplies, as the CDP Water Disclosure report makes clear:

“Given the potentially catastrophic consequences of mismanaging water resources, investors are placing increasing importance on greater transparency and accountability on water scarcity and other water related issues.”

With these consequences in mind, CDP Water Disclosure is focused on making water use and sustainability a central issue.

“We have a short term goal, which is to help raise awareness and understanding of water as a business and investment issue,” says Norton. “In the longer term, we seek to put data at the heart of decision making by companies, by policy makers and by investors.”

About half the companies returned completed surveys, and the results, which were published in November, 2010, are promising: fully 89% of those answering the survey said they’d already developed specific policies and plans for dealing with water risk, while 60% said they’d already set water-related performance targets.

Companies can begin that process right now, as the survey results allow companies to evaluate their own water usage against their competitors as well as understand their own preparedness for future risks related to current consumption patterns.   As the project describes, the collected “data will provide valuable insight into the strategies deployed by many of the largest companies in the world on water and will be used to help drive investment towards sustainable water use.”

Greg Koch doesn’t need any convincing.   As Director of Global Water Stewardship for the Coca Cola Company, he’s aware of the importance of water — and doesn’t hide much when it comes to Coke’s water management.

This past year at World Water Week, Coke and the Nature Conservancy (TNC) released a report about the company’s water footprint — and, in the process, highlighted the importance of transparency in water issues.

The report showed that Coke used 310 billion liters of water in the production of its beverages every year.   Since Coke is a non-export company, this includes some of the same water that its customers rely on for drinking water.   That could mean the company and the consumer will compete for control of that resource.   But Koch takes a different approach.

We’re in This Together

As Coke learned in 2003, even the perception of irresponsible water use and watershed management can harm a company’s reputation. Coke in Kerala, India, was accused of depleting and polluting the groundwater, and it led to a suspension of operations that continues through today.   The company has denied liability, but it is a reminder of the importance of sustainable water use.

“You can lose your license to operate if you don’t contribute to a sustainable management of scarce water resources,” says Piet Klop, who helps run the World Resources Institute’s Markets and Enterprise Program.

How to Measure Water Risk?

“There aren’t universally accepted and applicable methodologies (for measuring water use) out there,” says Norton.   “We hope that by having an annual questionnaire that goes out to a large number of the world’s biggest companies we can help accelerate that process.”

That acceleration is important as many companies are already feeling a water pinch. To develop a clearer picture of the water risk landscape, CDP Water Disclosure sent out a second annual survey in November, 2010.   Its results will be published later this year, and the survey itself took a slightly different focus than the first.

While the first survey focused on water risk by type, such as physical risks or regulatory risks, the most recent survey focuses on identifying high-risk geographies and describing the risks associated with those geographies.

This type of geographical context is essential to utilizing water footprints, since a simple number describing water use is not very useful.

“Water risk is complex,” says Brooke Burton, the Senior Manager for the Corporate Program at CERES.   “Boiling it down to a single number, if that ever happens, is going to be very challenging.”

It’s not just about simple geography, water availability or total water use.   Rather, it is about how those aspects interact and, most importantly, what the company is doing to manage water use.   In this perspective, a picture of a company’s water use in the form of a footprint is just the beginning.

Context: More Than a Footprint

“That is the context in which you need to think about water footprints,” says Koch, “As a very useful tool to starting a much bigger, more complex journey.”

Unlike carbon, water sustainability and stress are localized to a specific region.   For example, investing in water infrastructure in Chile will have no effect on water stress in Argentina.

In addition, there is the matter of how one utilizes the water that is available.

“Water is infinitely renewable,” Koch says.   “Yes, it matters how much you use, but it also matters where and when you are using that amount of water, in what condition are you using it, who are you competing with…”

Take, for example, the placement of some of Coke’s manufacturing plants.   Three of them are located in the Atacama Desert in Chile, one the driest places on earth. Through that singular lens, investors might be concerned about water security.   But Koch says there is more to the story.

“(The plants) are sustainable from a water standpoint because of the policies and pricing put in place and the allocation that the government has put in place around desalinization and using snowmelt from the Andes,” he says.

Trying to capture this intricate picture of what water security and risk actually mean for manufacturers like Coke is a difficult task, but many groups are taking on the challenge.   There is also the additional challenge that water security for corporations and communities is impacted by growing populations and the increasing threat of climate change.

These issues and solutions will be are explored in Part Two of this series.

May 17, 2011: The paragraph describing the situation in Kerala, India has been corrected and clarified.  Coke’s operations in that region have not been resumed.

Water Quality in Spotlight at World Water Week in Stockholm
Can Footprinting Stomp out Water Waste?

Tracy Stanton is the Water Program Manager of the Ecosystem Marketplace.Ã‚Â  She can be reached at [email protected].