Climate change as well as resource scarcity has led environmental conferences and conventions to ask if a water-energy-food, “nexus,” with transparent trade-offs, could be complementary to climate compatible development and useful in managing natural resources. 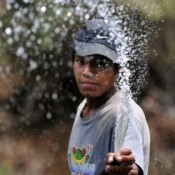 Climate change as well as resource scarcity has led environmental conferences and conventions to ask if a water-energy-food, “nexus,” with transparent trade-offs, could be complementary to climate compatible development and useful in managing natural resources.

This article originally appeared on the Climate and Development Knowledge Network website. Click here to view the original.

14 May 2012 | The ‘nexus’ has become a popular buzz word to describe the complex linkages among water, energy and food security – sectors that have traditionally remained fairly separate. Talk of the water-energy-food nexus was a hot topic at last month’s Planet Under Pressure conference; it is also the focus of a significant German government-organised input to the UN Rio+20 Summit. What has brought nexus thinking to the fore, and what does this nexus look like? How does it relate to climate compatible development?

The ‘nexus’ debate is primarily a debate about natural resource scarcity. Some of the natural resources that support human wellbeing are renewable and seeming endless, such as solar energy. However, the vast proportion of the resources needed to generate fresh water, energy and food for the world’s growing population are limited: resources such as land, soil, nutrients and freshwater itself. This natural resource base is also, as the Millennium Ecosystem Assessment reminds us, degraded and polluted by centuries of human mismanagement. These pressures lead to the gritty political economy questions: ‘how are natural resources managed, and for whose benefit?’  These questions require careful analysis and negotiation of the trade-offs.

‘Nexus’ thinking bears some similarities to previous efforts to address water, food and energy issues holistically. For example, Integrated Water Resources Management (IWRM) was intended as a cross-sectoral approach which posed freshwater needs for human health and sanitation, against demands on water for energy (eg, hydropower) and food security (eg, crop irrigation). However, in practice IWRM has failed to deliver, often due to the fact that the underlying politics of resource allocation and linkage to markets are typically inadequately addressed.

We have seen fast advances in scientific understanding of climate change processes and their current and projected impacts on humans and ecosystems – as seen in the recently released IPCC SREX report. At the same time, the impetus to mitigate against climate change has led to the search for renewable energy technologies, some of which increase the competition for land (e.g. biofuel feedstock production, solar and wind farms) or water (hydropower).

Put together the pressures of climate change and the human response to climate change, global demographic trends including the world’s burgeoning population size and increased consumption levels, and it’s no wonder that decision makers and researchers identify more acute pressure on the natural resource base that generates food, water and energy, than at any previous time in human history. ‘Nexus’ thinking becomes a shorthand for this confluence of trends and need for explicit trade-offs in policy-making.

Framing these pressures as a ‘water-energy-food nexus’ is useful if it is sensitive to political economy issues: if the approach calls for robust analysis of trade-offs, and open, transparent negotiation of resource trade-offs among concerned stakeholder groups at appropriate scale (regional, national, subnational). Such a framing is also particularly complementary to rights-based development approaches.

In a simplistic form, however, could nexus thinking be risky? Might it identify scarce resources that are most tangible and monetised, or able to be easily marketed, while potentially overlooking those resources which are less visible (such as certain biodiversity values) or insufficiently valued (such as carbon). In other words, could nexus thinking under-play environmental externalities at our peril?

Imagine, for example, a river basin in which natural resource trade-offs were negotiated effectively to maximise benefits for stakeholders seeking food, water and energy services – such as freshwater for cities, agriculture and hydropower. But what if those development benefits were framed in a short-term horizon and missed critical opportunities to store soil and forest carbon, and reduce downstream vulnerability from drought and flooding in a changing climate?

To give another example, there is a need to examine the relationship between different parts of the ‘nexus’: such as ‘energy-for-water’, looking more closely at the energy costs for activities such as transporting water, irrigation, water purification and waste treatment and as noted above, the associated carbon emissions.

Approaches which integrate both the trade-offs inherent in different resource allocations and the trade-offs among costs of associated externalities (e.g. pollution) have received very little attention by researchers to date. Trade-offs of such complexity are seldom factored into policy decisions (although creation and robust enforcement of environmental protection laws will certainly help). Defining the scale of analysis is also important. For example, solutions to energy security will not be the same at the local level as compared to the national level. In this new world, where climate change looms large, shouldn’t climate services on which we all depend for survival be an explicit part of the ‘nexus’?

Could the ‘nexus’ fit with climate compatible development approaches?

As with ‘nexus’ thinking, climate compatible development approaches also need to evolve so that they can consider inter-temporal trade-offs. Here’s an example: groundbreaking research into crop insurance presented at the Planet Under Pressure conference last month by Architesh Panda et al. (Institute for Social and Economic Change, Bangalore) showed how an Indian scheme to increase poor farmers’ resilience to climate change and boost their incomes through offering crop insurance had an unintended outcome which may undermine their resilience and welfare in the longer term.

Farmers have shifted from rice to cotton production which has reduced their dependence on rain-fed irrigation and hence their vulnerability to droughts. However, crop insurance has encouraged farmers to mono-crop which makes them more vulnerable to crop diseases and price swings, and reduces biodiversity. The authors conclude that subsidised insurance, unless carefully constructed may create disincentives for farmers to adapt fully to climate change. This example illustrates helpfully how the ‘development’ and ‘resilience’ aspects of the ‘climate compatible development’ approach are themselves grey areas, not black-and-white affairs. It also shows how food security and water use – two parts of the ‘nexus’ – could be interlinked.

Perhaps most of all, this example shows how, as with all public policies – delivery of the best laid climate compatible development plans must be monitored, evaluated and modified if outcomes are to be optimised across adaptation, mitigation and development criteria, and short-term gains weighed carefully against the potential for long-term losses.

Read the original.
Image of Nicaraguan water use during a drought, courtesy of CIAT