The severity and frequency of wildfires has regions like the US West scrambling for solutions. New research presented during a webinar shows Colorado is taking advantage of the watershed investment approach as more water providers in the state adopt Denver’s celebrated investments in watershed services project that simultaneously protects the city’s water supply and reduces wildfire risk. 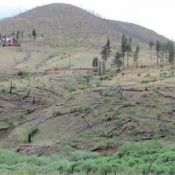 21 January 2015 | Water flowing from Colorado watersheds are critical to many US states. Snowmelt sliding down the Rocky Mountains feeds rivers like the Colorado and Arkansas that supplies western states with a water source. But the catastrophic wildfire that has been tearing through the southwestern state in an increasingly more violent way puts the headwaters of these waterways in jeopardy.

The late 1990s and early 2000s saw two fires that together burned 150,000 acres of forestland and dumped 40 years’ worth of sediment into the Strontia Springs Reservoir. Strontia Springs is a key source of water. It helps supply the 1.3 million customers of Denver Water, a water provider, with clean water. The cleanup effort from those fires cost Denver $26 million on water quality, restoration, reclamation and sediment drainage beginning in 1996 after the first fire-Buffalo Creek Fire.

Fire suppression has made wildfire intensity that much worse. But fire isn’t the only threat Colorado’s watersheds are facing. Bark beetle and flooding plus a changing climate all pose a risk to Colorado’s forests and the water that runs through them.

Because of these threats-among others-various Colorado water providers have paid over $13 million in watershed investments and forged partnerships to identify and address problems plaguing the state’s forest ecosystems. These activities were highlighted last month during a webinar that showcased findings from Ecosystem Marketplace’s latest State of Watershed Investments report.

“It was a wake-up call for Denver that they needed to be in the watershed business, not just the water storage and delivery business,” says Heidi Huber-Stearns, a PhD candidate in the Department of Forest and Rangeland Stewardship at Colorado State University and also the presenter on Colorado during last month’s webinar.

The upstream watersheds of important waterways like the Colorado and Arkansas rivers fall primarily on land controlled by federal agencies like the Forest Service and the National Park Service. So in 2010 Denver Water partnered with the US Forest Service to address key challenges that included reducing wildfire and minimizing current erosion and reservoir sedimentation. To date, the Colorado water provider has paid the Forest Service $11 million to address these issues through forest thinning or fuel treatments, prescribed burning and erosion control.

Denver’s program is famous and has received national and international attention as a model to be adopted in other states and regions struggling with similar issues. It, along with more wildfire damage, influenced four other such partnerships to occur in Colorado. Aurora Water’s collaboration with the US Forest Service was the first in 2011. Aurora Water is a major water provider in the Colorado Front Range.

And after the record-setting High Park and Waldo Canyon Fires in 2012, water provider Northern Water, initiated the Colorado-Big Thompson Project together with the Bureau of Reclamation, US Forest Service and the Colorado Forest Service. The project restores forest and watershed health while also maintaining the hydropower facilities located in the Big Thompson reservoir.

The Waldo Canyon Fire was a deciding factor for another water company as well. After dealing with the aftermath of that fire along with another harrowing blaze the following year- the Black Forest Fire, which topped the Waldo Canyon Fire as the most destructive fire in Colorado history-the Colorado Springs Utilities partnered with the US Forest Service in 2013 following a similar model. Also in 2013, the Pueblo Board of Water Works forged a partnership with the same federal agency over wildfire risk and forest and watershed health.

Combined, investments in these programs led to some 21,000 acres of land undergoing fuel treatments to reduce the risk of catastrophic wildfire. These programs are relatively new, however, and how they will play out remains an open question.

But Huber-Stearns says they have made a lot of progress already. “The collaboration, planning and work that’s been done on the ground so far have really been invaluable in addressing current risks that we face as well as what we anticipate we’ll face with the changing climate.”

California Wildfires Kill More Than Trees, And That May Help Us Prevent Them In The Future