Skip to content
A consortium of Colombian banks and NGOs hopes to harness the power of REDD for a more broad-based ecosystem marketplace. Like emerging market exchanges around the world, this one comes with its own education campaign – and starts with trees. We speak with Fundacion Natura’s Roberto Gomez, who is spearheading the effort. 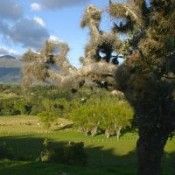 A consortium of Colombian banks and NGOs hopes to harness the power of REDD for a more broad-based ecosystem marketplace. Like emerging market exchanges around the world, this one comes with its own education campaign – and starts with trees. Ecosystem Marketplace’s Katherine Hamilton caught up with Fundacion Natura’s Roberto Gí³mez, and filed this report.

BOGOTA | Colombia | 5 October 2012 | Last week marked the inception workshop for the creation of a Colombian-based market platform for voluntary carbon offset transactions. As reported in Ecosystem Marketplace two years ago (see below), the initiative is being led by Fundacion Natura Colombia and supported by the Global Environment Facility and Inter American Development Bank. It aims to create a market platform for Colombian-verified emission reductions for purchase by domestic or international buyers and will support the issuance of credits as well as foster demand through corporate carbon management strategies.

Molly Peters-Stanley manages Ecosystem Marketplace’s Carbon Program. She can be reached at mpeters-stanley@ecosystemmarketplace.com.