The Choco-Darien Conservation Corridor in Colombia marks the first REDD project certified under the VCS as well as the first project on community-owned, collectively-titled land. The project plans to implement sustainable economic alternatives for the community while cutting the risk of illegal logging and land-grabbing. 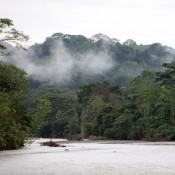 This article originally appeared on Mongabay.com. Click here to read the original.

19 November 2012 | A conservation project in Colombia has broken new ground in the world of forest carbon credits. The project, run as partnership between an Afro-indigenous community and a Colombian company, is the first REDD+ project certified under the Verified Carbon Standard (VCS) in Colombia. More importantly, it is also the first certified REDD+ project on community-owned, collectively-titled land.

The 13,465-hectare Chocí³-Darién Conservation Corridor REDD+ Project is located in the northeastern-most part of Colombia near the border with Panama. Until recently, the area was beset by violent conflict which had displaced many of the region’s traditional residents, including members of the COCOMASUR landholder association. But with the restoration of relative peace to the area, the community began to re-establish itself on lands to which it holds collective title. The area includes large tracts of lowland rainforest that are at risk of illegal logging, conversion to cattle pasture, mining, and land-grabbing by outsiders. The new project aims to cut these risks by strengthening COCOMASUR’s land claims and improving natural resource management. Al least half the revenue from sales of carbon credits generated by avoiding deforestation will go to the community. Project activities including raising awareness of collective identity and rights, resolving land disputes, participatory land use planning, and sustainable economic alternatives.

The project, which earlier this year was awarded Gold Level validation under the Climate, Community, and Biodiversity (CCB) standard, completed validation and verification under VCS last week. Brodie Ferguson, Founder and Managing Director of Anthrotect, the company that initiated the project, said the achievement shows that a properly-conceived REDD+ project can benefit both forests and forest-dependent people.

“This achievement demonstrates that Afro-descendant and indigenous landholders can play a central role in protecting tropical forests and preventing climate change,” said Ferguson, who approached communities about the concept of carbon conservation in 2007 after completing years of research on the impact of forced displacement in the region. “For the first time, forest-dependent communities in the Chocí³ are generating income from carbon markets while preserving their traditional ways of life.”

The project expects to prevent 2.8 million tons of carbon dioxide emissions over its 30-year lifespan, offering a long-term income stream to support low carbon natural resource management in an ecosystem that ranks as one of the most biodiverse on Earth.

“Our business model addresses the fundamental needs of people and their ecosystems. By producing durable conservation and financial dividends, it is a starting point for a new kind of prosperity—one that can endure generations,” added Anthrotect’s Emily Roynestad.

The project’s certification comes at a time when many REDD+ projects are struggling due to uncertainty in the marketplace and challenges with meeting certification standards, which require consent from local communities, biodiversity protection, and other safeguards. In some regions, the sector suffered from an influx of unscrupulous developers — sometimes called “carbon cowboys” — who have sought to capitalize on lack of a regulatory mechanism to take advantage of unsuspecting forest peoples, tricking them into turning over their land rights for vague promises of “sky money” or carbon payments. The problem has been particularly acute in remote parts of Papua New Guinea, Indonesia, and the Amazon.

Proponents of the concept of REDD+, which aims to reduce emissions from deforestation and forest degradation by compensating tropical countries for protecting forests, argue that a properly designed mechanism could offer a raft of benefits, including forcing reforms in a sector of plagued with mismanagement and corruption. Critics say REDD+ puts the rights of people without recognized land tenure at risk and will fail to reduce emissions if it doesn’t address the underlying cause of deforestation — consumption — or overcome technical and methodological challenges. At present, many of the details of REDD+ are still being worked out, so REDD credits are limited to voluntary markets, where companies choose to “offset” emissions they can’t or won’t otherwise avoid. It remains unclear whether an offset-based compliance market will ultimately develop for REDD credits.

Click here to read this article in its original format.