Forest carbon practitioners spent the last decade trying to perfect ways for companies to reduce their carbon footprints by funding programs that lock carbon in trees.  But all those rigorous methodologies and standards will be for naught if emitters don’t understand how REDD works.  That’s where Code REDD comes in. 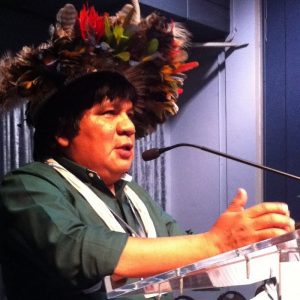 Forest carbon practitioners spent the last decade trying to perfect ways for companies to reduce their carbon footprints by funding programs that lock carbon in trees.   But all those rigorous methodologies and standards will be for naught if emitters don’t understand how REDD works.   That’s where Code REDD comes in.

20 June 2012 | RIO DE JANEIRO | Brazil | This year’s “State of the Voluntary Carbon Markets” report documents more than seven million tons of reduced greenhouse-gas emissions from deforestation and forest degradation (REDD). That’s an impressive number of credits generated by saving endangered rainforest and a testament to the work put in by hundreds of scientists, economists, and entrepreneurs who have spent the last decade developing rigorous methodologies for measuring both the amount of carbon sequestered in trees and the impact of human action on that sequestration.

Worldwide emissions, however, topped 9 billion tonnes in 2010 – underlining the need for REDD to scale up fast if it’s to make an impact. For that to happen, buyers must understand the science, the systems, and the analysis behind forest carbon in general and REDD in particular.

“That’s where Code REDD comes in,” says Mike Korchinsky, CEO of project developer Wildlife Works. “We’ve got the science; we’ve got the methodologies; now we need the buyers.”

His company, which created the first REDD project to earn carbon credits under the Verified Carbon Standard (VCS), announced the formation of Code REDD in November and launched it on Tuesday at the United Nations Conference on Sustainable Development (Rio +20) in Rio de Janeiro, Brazil.

Much like a trade guild or industry association, Code REDD will promote the REDD sector externally and promote best practices internally. Unlike an association, however, it will be funded and spearheaded by one entity: Wildlife Works itself.

“Associations are great, and we’re members of many of them,” Korchinsky says. “But they tend to move slowly because they have to look for consensus, and we felt that, as a relatively successful player in the voluntary market, we have a responsibility to try and ensure that our success contributes to a meaningful reduction in emissions through REDD as a mechanism.”

His shareholders agreed to fund Code REDD for two years, after which they hope it will finance itself with fees and other mechanisms.

First the Pledge, Then the Payment

Voluntary carbon practitioners at this year’s Carbon Expo in Cologne, Germany identified corporate outreach and education as primary objectives for the year ahead, and Code REDD aims to serve that objective with a combination of viral and direct marketing.

“The campaign will involve people actually calling on corporates to convince them that REDD can help them play a role in protecting forests,” says Korchinsky. “It will also stress that it will be beneficial for them to participate.”

It will not market credits from individual project, but will instead encourage companies to make a more general pledge – one that obligates them to save endangered rainforest by using REDD credits to offset their emissions.

“You can’t join this campaign by signing a petition that says you would like us to stop deforesting,” says Korchinsky. “The only way you can join is by pledging to spend money to support high-quality projects that are stopping deforestation.”

Once made, the pledge becomes something of a soft bid on what sounds like a rudimentary trading platform. “The pledge will go on the Code REDD web site, which will also list the Code REDD projects,” says Korchinsky. “These are high-quality REDD projects that are verified and validated under both the VCS and CCB (Climate, Community & Biodiversity standard) and have also agreed to follow an additional code of ethics.”

That additional code was formulated by Dutch energy provider Eneco in accordance with guidance from WWF, the International Finance Corporation (IFC), and Conservation International (CI). Participants will be self-audited, but the Code REDD steering committee reserves the right to eject those who fall out of compliance.

The program has launched with eight projects from seven project developers. Four are in Africa, three are in South America, and one is in Asia.