UNFCCC Executive Secretary Yvo de Boer has resigned after nearly four years to become KPMG’s Global Adviser on Climate and Sustainability.  In a statement, de Boer cited the need for "new partnerships with the business sector" after the Copenhagen climate meeting failed to yield a legally-binding agreement. 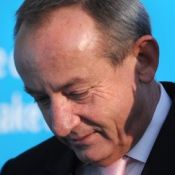 Bonn, 18 February 2010 | UN climate-change boss Yvo de Boer announced today that he will resign his position as Executive Secretary of the United Nations Framework Convention on Climate Change as of 1 July 2010 to join consultancy group KPMG as Global Adviser on Climate and Sustainability as well as working with a number of universities.

He has led the organization since September 2006.

“It was a difficult decision to make, but I believe the time is ripe for me to take on a new challenge, working on climate and sustainability with the private sector and academia,” he said. “I have always maintained that while governments provide the necessary policy framework, the real solutions must come from business.”

“Copenhagen did not provide us with a clear agreement in legal terms,but the political commitment and sense of direction toward a low-emissions world are overwhelming,” he said. “This calls for new partnerships with the business sector, and I now have the chance to help make this happen.”

He will remain in his current position until 1st July and help negotiations move forward ahead of the Climate Change Conference in Mexico in November this year.

Born in 1954, de Boer was appointed Executive Secretary of the UNFCCC in September 2006. Before that he was extensively involved in European Union environmental policy as deputy Director General of the Dutch Environment Ministry. He has also served as Vice-chair of the U.N. Commission on Sustainable Development, acted as an adviser to the Government of China and the World Bank and worked closely with the World Business Council on Sustainable Development.