To help interpret the well-known complexities of countries’ Intended Nationally Determined Contributions (INDCs), the Climate Development and Knowledge Network have released an updated version of their popular Guide to INDCs. This new edition continues to focus on Least Developed Countries with new material on Small Island Developing States. 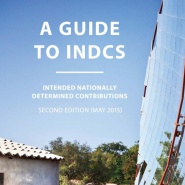 To help interpret the well-known complexities of countries’ Intended Nationally Determined Contributions (INDCs), the Climate Development and Knowledge Network have released an updated version of their popular Guide to INDCs. This new edition continues to focus on Least Developed Countries with new material on Small Island Developing States.

2 June 2015 | The Ricardo-AEA, a sustainability consultancy, have revised their popular Guide to INDCs, which helps countries to prepare their Intended Nationally Determined Contributions (INDCs) for the UNFCCC (United Nations Framework Convention on Climate Change). This new edition of May 2015 has been revised following discussions with stakeholders and includes new material and specific examples for Small Island Developing States (SIDS) – in addition to its original focus on Least Developed Countries (LDCs). In response to strong demand, the two entities provide this revised edition in French: Guide de Préparation des INDC and in Spanish: Guí­a para las INDCs.

INDCs are contributions by the Parties to the UNFCCC towards achieving the ultimate objective of the Convention: to prevent dangerous human interference with the Earth’s climate. The UNFCCC has invited all Parties to communicate to the secretariat their INDCs well in advance of COP 21 and it will prepare by 1 November 2015 a synthesis report on the aggregate effect of the INDCs that have been submitted before 1 October.

LDCs and SIDS have contributed less to current global emissions than other countries; so the burden of cutting emissions will rest with major economies. However to avoid dangerous levels of global warming, all countries will have to play a role. The UN has communicated that contributions towards a global agreement should reflect the ‘special circumstances’ of these low-emitting countries.

Many LDC and SIDS governments are preparing INDCs and see the advantages in doing so:

This guide seeks to address the broad range of approaches being considered by LDCs and SIDS in preparing their INDCs, including the challenges they face and different national circumstances and levels of capacity, preparedness and ambition. The Guide to INDCs provides a practical example of how an INDC could be structured, with examples to illustrate a narrative and sources of background information.

The Guide to INDCs is not an official publication of the UNFCCC, nor is it endorsed by the UNFCCC. However, it was developed in consultation with a range of stakeholders, including authors of existing INDC guidance, representatives from LDCs, and organisations working with CDKN to support INDC preparations. It draws from the INDCs which have already been submitted, and a range of referenced literature.