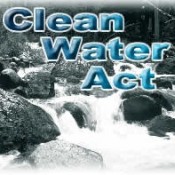 24 September 2012 | The Clean Water Act is nothing if not ambitious, aiming for zero pollutant discharges and all surface waters suitable for recreation within 15 years of passage of the Act. That was 40 years ago next month and, while progress has been made, we still have a long way to go: depending on who you ask, somewhere between 50-90% of water bodies in the U.S. today do not meet recreational goals.

Mountaintop removal mining, hydrological fracturing for natural gas, and stormwater runoff are among major threats to water quality. At the same time, the CWA itself is at risk as legal argument over its scope cramps enforcement and threatens to remove CWA protections over millions of acres of wetlands and tens of thousands of stream miles.

At issue is the jurisdiction of the CWA. That is, which waters are subject to federal permitting requirements and technology-based water quality standards, and which are subject only to state or local water regulation. Recently, a panel at the Clean Water Act Law and Regulation conference held on September 20th-21st in Washington DC tackled the issue.

The take-home message from presentations by Donna Downing of the U.S. Environmental Protection Agency, Jan Goldman-Carter of the National Wildlife Federation, Peggy Strand of Venable LLP and Andrew Doyle of the Environmental and Natural Resource Division of the U.S. Department of Justice is that CWA has become narrower and more uncertain over the past ten years, thanks to convoluted Supreme Court decisions and confusing regulatory guidance.

The Clean Water Act was originally intended to apply broadly to protect U.S. waters. In fact, Congress explicitly discussed and rejected the idea of limiting the Act’s application to navigable waters. As Senator Howard Baker (R-TN) reasoned: “The once seemingly separable types of aquatic systems are, we now know, interrelated and interdependent. We cannot expect to preserve the remaining qualities of our water resources without providing appropriate protection for the entire resource.” At the same time, there is a balance to be struck between limitless coverage of the Clean Water Act on one hand and respect for private property and for state and local authority over purely local waters on the other.

Three decades after the Act was passed, two Supreme Court decisions seemingly narrowed the reach of the CWA: Solid Waste Agency of Northern Cook County (SWANCC) v. U.S. Army Corps of Engineers (2001) and Rapanos v. United States (2006). SWANCC denied CWA jurisdiction over isolated ponds, while a divided Court in Rapanos fumbled to address the broader question of when non-navigable waters are subject to CWA requirements. The multiple, conflicting rules of Rapanos combined with a confusing guidance subsequently issued by the EPA and the Army Corps of Engineers, are at the heart of the deep confusion that exists over CWA jurisdiction today.

New rules are needed, says Ms. Goldman-Carter. As things stand, millions of acres of wetlands are no longer covered by the CWA and tens of thousands of stream miles are at serious risk of losing protections. The high cost of arguing jurisdiction in every case means that regulators are not enforcing the CWA where jurisdiction might be questionable, effectively undercutting clean water protections.

The existing confusion is a headache for people on the other side as well. For anyone that needs a CWA permit, drawn out research and discussion about jurisdiction saps time and money without helping to move the project forward. And ongoing confusion about potentially eligible streams and wetlands slows forward momentum for promising water trading and wetland mitigation efforts.

In a promising move, the EPA issued new draft guidance on the reach of the CWA in December 2010. It’s a vast improvement on the status quo, according to Ms. Goldman-Carter, in part because it embraces a watershed approach. But the draft has yet to be finalized and, says Ms. Strand, it is far from clear that additional nonbinding guidance will provide anything other than “another ten years of attention and paperwork that…will do nothing to clean up the water.”

Binding rules would be better. And while there are positive signs of regulatory activity on the horizon, rule making initiated in the spring of 2011 seems to have stalled. So there is reason for cautious optimism about future developments building from the draft guidance to new regulations that recognize the interconnectedness of aquatic systems. The reality for now, however remains what Mr. Doyle calls “a litigator’s dream,” if perhaps a regulator or client’s nightmare.