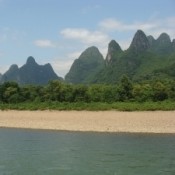 30 April 2013 | Until the middle of the last century, Fuzhou, China enjoyed regular flows of clean water from the Min River. But that began to change with the advent of urbanization in upstream cities like Sanming and Nanping, and with deforestation in hills surrounding those cities. This brought irregular flows of dirty, unsanitary water to Fuzhou. Now the city is paying roughly $800 million annually to each of those cities. The money is used to administer regional water management programs that encourage farmers to reforest the denuded hills and implement sustainable land-use practices.

It’s all part of the Min River Watershed Water Resource Protection Eco-Compensation Program – one of several uniquely Chinese efforts to promote healthy watershed stewardship on a grand scale. Like dozens of Payments for watershed services (PWS)-also known as investments in watershed services (IWS)-programs underway across the world, China’s eco-compensation programs aim to tap the flexibility of markets to promote responsible and cost-effective watershed stewardship. Unlike those other efforts, however, this one has the heft of China’s powerful central government behind it. That’s made it possible for them to achieve unrivaled scale – to the point that China accounted for 91% of watershed investments in 2011, according to Ecosystem Marketplace’s State of Watershed Payments 2012 report. This one country almost singlehandedly generated all of the $ 7.46 billion in watershed transactions that came out of Asia that year.

The term “eco-compensation” is an all encompassing term that covers government initiatives to improve environmental management with a focus on water resources and watershed management. While eco-compensation is a uniquely Chinese concept, it shares DNA with PWS, because it offers market-based – or at least market-like – solutions to environmental challenges. Eco-compensation is almost entirely driven by the government – primarily the national government, although local implementation varies place to place. Sometimes, compliance is mandatory. It has strong elements of wealth transfer from urban to rural and from richer to poorer members of society, and that means to those most environmentally impacted. It’s also happening at an unprecedented scale. Much of China’s involvement and innovation in this sector is due to the nation’s growing environmental problems. The rapid economic growth in China has put increased pressure on the nation’s water supply and other resources.

China’s biggest and most successful eco-compensation program so far has been the Conversion of Croplands to Forests and Grasslands, (CCFG) otherwise known as the Sloping Lands Conversion Program. The CCFG initially aimed to convert 14.67 million hectares of cropland to forests and afforest about the same amount of land that is currently wasteland, according to a study on the program called China’s Sloping Land Conversion Program: Institutional Innovation or Business as Usual? The program has since been frozen at 9.2 million hectares.

The CCFG program was implemented after flooding across China in the 1990s displaced millions of people and killed thousands. According to the same study on CCFG, sloping cropland contributes 65% of the 2-4 billion tons of silt that is dumped into the Yangtze and Yellow-China’s longest and most productive rivers- every year, and that’s the focus of this program.

In order for this program to work, farmers don’t necessarily have to stop farming but they do have to alter their land-use practices. While many farmers find other sources of employment, the program uses several creative approaches like agroforestry that allows farmers to continue working on the land. As part of the program, the government provides compensation to farmers. At one time, farmers could be paid with grain or cash but now all payments are in cash.

By 2003, the program was being implemented in more than 2000 counties in 25 provinces. As of 2007, the program had retired and afforested over 9 million hectares of land-an area slightly smaller than the state of Maine-according to a report on CCFG.

In 2011, the CCFG program was the largest land reforestation program in the world and was responsible for 47% of China’s Investments in Watershed Services, according to State of Watershed Payments 2012.

Eco-compensation envelopes a variety of frameworks. This includes direct payments from government to individuals or community suppliers of watershed ecosystem services. It covers compensation to households or regional governments for taking regulatory action towards conservation or protecting a fragile ecosystem among other deeds. Eco-compensation can also include some sort of fee or tax to increase funding or incentives on restoration and environmental management.

Although the central government is driving the policy and footing much of the bill, the program enjoys flexibility in how the policy directive can be implemented locally. This has positives and negatives. On the plus side, it has fostered variety and experimentation on the ground, which in theory promotes models that work. But because of the low information sharing between government ministries, academic institutions and the private sector, several eco-compensation programs are undocumented. It’s created a system that’s difficult to evaluate and tough to track. Also, China as a whole is new to market-based instruments causing some market-like activities to remain under the radar.

With solid financial backing from the Chinese government to implement these market based instruments that are improving efficiency, eco-compensation has the potential to bring real and much-needed reform to China’s water resource management and also help China develop an economic model that is sustainable. In 2009, China’s National Development and Reform Commission (NDRC) and other government agencies hosted the “International Conference on Payments for Ecological Services” in an attempt to share experiences and provide opportunities to invest and operationalize eco-compensation programs. The NDRC is also developing a national Eco-compensation Ordinance, and the national government has stressed promotion and improvement of eco-compensation as a key component of the environmental targets of its 12th Five-Year Plan. Chin’s Five-Year Plans are a series of social and economic incentives laid out by the Chinese government. The current guideline, the 11th Five-Year Plan (2011-2015) focuses on tackling environmental challenges like carbon emissions and water pollution.

Eco-compensation will likely be integrated into China’s zoning laws in the future as well. In a new zoning system, development rights and restrictions are distributed based on the ecological services of the land.

Much more work needs to be done, however, and it remains to be seen if the eco-compensation trend will truly solve China’s water problems.

Forest Trends’ Katoomba Group will be discussing this issue further as it unfolds at their next meeting-Katoomba XVIII: Forests, Water and People, to take place next month in China. The meeting will draw on talks with leading experts, practitioners, policymakers and investors from China and abroad to try and solve the water crisis using nature-based solutions.

This is the first in a series of stories offering coverage leading up to and during Katoomba XVIII: Forest, Water and People to take place in Beijing, China, on May 16 and 17. The meeting will gather leading experts, practitioners, policymakers, and investors from China and abroad to advance nature-based solutions to the water crisis for an urbanizing world.