China brought representatives from all levels of government to Cancun in a show of support for low-carbon growth (and its economic co-benefits).  It also announced the first pilot project under its new Panda Standard and offered a preview of its sectoral approach to China’s unique vegetation. 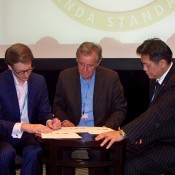 China brought representatives from all levels of government to Cancun in a show of support for low-carbon growth (and its economic co-benefits).   It also announced the first pilot project under its new Panda Standard and offered a preview of its sectoral approach to China’s unique vegetation.

9 December 2010 | CANCUN | “China Blossoming” was the title of one side event benchmarking China’s carbon market position at the UNFCCC’s 16th Conference of Parties (COP16). It’s an accurate description of Cancun’s Chinese delegation, which arrived bearing news of significant progress on domestic voluntary mechanisms and provincial programs – including a pilot project and sectoral specifications under the Panda Standard for voluntary carbon offsets.

While some described China’s Copenhagen delegation as “cagey” and “uncompromising,” the new face of China is markedly more open and willing to talk shop in order to glean lessons from other nations’ market experiences.

“No matter what happens in Cancun, the low-carbon approach is the only way we can cope,” said Junfeng Li, Deputy Director-General for the National Development and Reform Commission’s Energy Research Institute.

“There’s no other choice – but we do not know how to make the best approach,” he added.   “That’s why we came here, to try to communicate with everyone and find the good technical solutions to make real change.”

Li joined leaders ranging from the provincial to the national level, as well as Chinese business representatives, in the first ever Chinese delegation to appear together in support of international climate talks.   At the Climate Group’s China Day, they called for technical and financial support from the international carbon community.

Yet, China is soon to accrue benefits from its cooperation with European carbon market players via the Panda Standard, a China-specific voluntary carbon offset standard initially focused on agriculture, forestry and land use (AFOLU) emissions and poverty alleviation.

One year after partners China Beijing Environment Exchange (CBEEX), Winrock International and BlueNext launched the Panda Standard in Copenhagen, they demonstrated that 2010 has been a very busy year – last night offering an outline of the Panda Standard’s AFOLU specifications (PS-AFOLU) and signing a MOU to launch the Standard’s first pilot forestry project.

A sneak peek of the PS-AFOLU sectoral specifications reveals that the standard – when set against the backdrop of provincial climate actions – not only rounds out China’s low-carbon pursuits but may offer the global voluntary market some unique land-based methodologies. The PS-AFOLU’s flexible approach to additionality also positions the standard as a potential compliance-grade tool for China’s proposed carbon reduction scheme to be detailed in its 12th five year plan due in 2011.

But is demand for voluntary reductions – particularly for offsetting instruments like Panda Standard credits – bearish or bullish in the absence of clarity around the federal government’s national approach to climate change? If Chinese consumers’ enthusiasm for the low-carbon lifestyle is any indication, 2011 could be the year of the bear.

A Standard for China’s Sake

These objectives are reflected in early details of the Standard’s sectoral specifications for AFOLU projects. While the specifications are still under review, a panel of Panda Standard representatives and stakeholders celebrated an early win last night as the Agence Française de Développement (AFD), CBEEX and BlueNext signed a MOU to jointly support the first pilot project targeted for Panda certification – a bamboo reforestation program.

As a significant token of Sino-French cooperation on rural carbon finance, the French Global Environment Fund (FFEM) will provide a 1 million euro subsidy and work alongside the Administrative Centre for China’s Agenda 21 (ACCA21) to craft the PS-AFOLU bamboo reforestation methodology.

Under the framework of the AFD 35 million EUR loan agreement signed in April 2010 by Chinese and French Finance Ministers, the anticipated 15,000ha project is one component of AFD’s large scale rural carbon program in the Yunnan province to include reforestation, the promotion of rural biogas and the development of sustainable agriculture techniques.

“We have learned that it is meaningful for China to work on rural development and climate mitigation,” says the AFD’s Operational Department Director Jean-Yves Grosclaude. Grosclaude and the Panda Standard recognize that rural development is on par with China’s climate mitigation goals, and so emphasize “storing carbon in soil, in wood, or any kind of activity that applies to the rural sector.”

Grosclaude says the AFD is interested in the development of a programmatic system for their projects, bundling small mitigation activities to achieve greater market viability and lower transaction costs. Luckily for the AFD, the PS-AFOLU accommodates aggregation.

This capability fits in nicely with the project types identified by the PS-AFOLU specifications as appropriate for the “Chinese situation,” including improved forest management (IFM), forestation, revegetation (Winrock’s Dr. Sarah Walker, who worked with the Technical Committee on AFOLU guidelines, says air seeding is a popular approach in China) and cropland/grassland management.

Projects must have started after 2005 and apply tools and/or methodologies developed to PS-AFOLU specifications. They must also meet additionality criteria that are either project- or performance-based.

The option to choose between additionality assessments is a strategic move for the Panda Standard – other third-party standards tend to adhere to one approach or the other (though they may not be strictly bound to one approach). Walker cautions, however, that it will take some time to collect enough data to accommodate the performance-based additionality approach.

In the mean time, projects can apply the more laborious project-based approach to determine eligibility – but those who work with Standard believe that the performance-based option will eventually boost its appeal as a domestic compliance-grade domestic carbon standard once the necessary data is available.

Can I get you something while you’re waiting?

But until China has a government-driven market mechanism with which to comply, the nation relies on local pilot programs and voluntary action to curb energy intensity to 20 per cent below 2005 levels – the central government’s 2010 target.

To achieve this, the Climate Group’s Director for Greater China Changhua Wu says that domestic action through the voluntary carbon market may not take off as a popular mode for pursuing meaningful reductions. “China is going to move forward to set up an experiment with the carbon market in the next few years, so we’re going to have something going on,” she explains. “Not yet, but soon the process will be there.”

Saying that voluntary action – which by nature is not regulated – may not take off in China before the central government takes comprehensive action on climate change, Wu suggests that “people will instead go for the mandatory stuff.”

China’s idea of “pre-compliance” also differs significantly from the flurry of activity seen among potentially compliant entities in the US in 2009, which propped up global voluntary carbon market activity with their purchases of compliance-grade credits. In China, the central government is preparing for a national scheme by targeting key provinces and cities for pilot low-carbon programs.

Several leaders from these pilot programs presented their preliminary results to the Climate Group’s Climate Leaders Forum. These local programs were also described in the Group’s recently-released study on China’s Clean Revolution.

There’s more than one way to, well, you know…

One outstanding local program came from the Guangdong province (pop. 100 million), which reportedly reduced its energy intensity by 16 per cent from 2005 to 2009. It did so by improving the province’s policy framework, setting up an advice group and developing local regulations to address climate change and energy efficiency.

With a focus on strengthening the development of the service industry and high-end manufacturing, the province phased out some outdated technologies and facilities and established a designated energy efficiency fund. By 2009, Jianhua Zhao, Deputy Director of the Guangdong Development and Reform Commission (GDRC), reports that Guangdong’s total installed green energy generation is about 34 per cent of its total energy supply.

Zhao also notes that land-based activities are a focus area for the province, which aims to strengthen ecosystem preservation and increase its forest coverage. As of last year, the provincial forest coverage reached about 56.7 per cent.

“It’s not about the carbon trade but how we act to make the low carbon development an opportunity for our future – the green economy,” he says. “It’s about the future of local development.”

This sentiment is felt from the very bottom up. Mayor Dawei Li of Song Xian County in the Henan Province says that his government is genuinely serious about environmental protection: “The provisional level of government has a plan, but also we feel ourselves that we need to do something for the environment.”

Zhaio and the GDRC’s Head of Energy and Climate Yaojun Lin also describe the “green” fashion that’s sweeping the country. “In China, ‘low-carbon’ is regarded as a fashion now – it’s a very hot topic to live a low-carbon life,” they explain. “There has been a lot of communication and promotion of this low-carbon concept, so in major cities and tier two cities, people generally accept this concept and practice it quite actively.”

Related to this enthusiasm, the Climate Group’s Wu also details the success of the Million Forest Campaign tree-planting program initiated by the Climate Group in cooperation with the China Green Foundation and UNEP – where what started as a carbon calculator to accumulate “virtual trees” grew into a major national initiative to plant live trees. The initiative will soon expand from its original forest to plant forests in five additional provinces in China.

“We were not sure how much money we would be able to raise in order to plant the goal of one million trees at 5 RMB per tree. We needed to raise 5 million RMB, so we gave it two years time,” she explains.

“We completed that in nine months.”