Can water markets help revive the Chesapeake Bay? Perhaps – but only if each of the six Bay states and the District of Columbia agree to recognize discharge reductions in one state as credits in another. The Ecosystem Marketplace examines a voluntary initiative led by Forest Trends and the Katoomba Group designed to do what politics-as-usual has so far failed to accomplish. 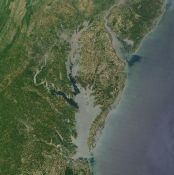 Can Water Quality Trading (WQT) help revive the Chesapeake Bay? Perhaps – but only if each of the six Bay states and the District of Columbia agree to recognize discharge reductions in one state as credits in another. The Ecosystem Marketplace examines a voluntary initiative led by Forest Trends and the Katoomba Group designed to do what politics-as-usual has so far failed to accomplish.

25 June 2008 | Will Baker was all smiles at the June 10th Global Katoomba Meeting in Washington, DC.

“I would like to thank my new best friend, Dick Coombe,” he laughed, referring to the Regional Assistant Chief for the Natural Resources Conservation Service (NRCS).

Coombe had just announced a $500,000 Conservation Innovation Grant (CIG) for a project initiated two years ago by Katoomba Group and Forest Trends (publisher of the Ecosystem Marketplace) and since joined by the Chesapeake Bay Foundation (CBF), of which Baker is president, as well as the World Resources Institute (WRI) and others.

“We take the responsibility of what you’ve bestowed upon us very, very seriously,” added Baker.

That responsibility is the creation of a cluster of voluntary Water Quality Trading (WQT) pilot projects in the Chesapeake Bay Watershed, which spreads over 64,000 square miles and encompasses the District of Columbia and parts of New York, Pennsylvania, Delaware, Maryland, Virginia, and West Virginia.

Fragmentation and the Law

WQT schemes have been piloted across the watershed, but with little success – often because the discharge limits that should drive demand have been slow to materialize.

What’s more, each individual state is currently responsible for setting its own discharge limits and laying down the ground-rules for offsets in its part of the watershed, regardless of what the other states are doing. Such a fragmented approach simply doesn’t work in a shared body of water.

“The goal of this initiative is to develop instruments that can move across state borders,” says Forest Trends President Michael Jenkins, adding that voluntary reductions alone will not solve the Bay’s problems. “We’re hoping to illuminate the way, so that a future regulated market can think about a regional approach to these issues – sort of like an RGGI (Regional Greenhouse Gas Initiative) for water.”

In the short term, he says, the existence of a well-structured market mechanism can entice polluters to reduce their discharges even before rules and regulations exist. In the long term, he believes the project can help promote the development of uniform standards across the Bay, and that these standards will also promote the development of more and better mechanisms down the road.

“This fund can help develop water credit trading here in the Chesapeake Bay,” he says. “That’s crucial, because it could leverage additional dollars by bringing a market-based approach to a situation where you have a clear and present danger to the health of the Chesapeake Bay, and there’s a high risk of not moving quickly.”

Coombe envisions an evolving scheme that learns from its mistakes, and says the diverse array of partners involved in the project made the decision to award the grant that much easier.

“It’s really just an idea at this point,” he says, “but it’s an idea that’s fleshed out with an interesting group of partners like the Chesapeake Bay Foundation, Katoomba Group, Forest Trends, and WRI, who bring a lot of international expertise to the table.”

Dan Nees is an associate at one of those partners, the WRI, and he believes a well-structure market mechanism is the sine qua non of reviving the Bay.

“The entire Chesapeake Bay restoration effort will happen within markets,” he says. “Markets are the framework for everything that we do in our society – so we’ll do it with markets, or we won’t do it at all.”

The project, initially dubbed the “Nutrient Neutral” Fund, was conceived two years ago by Ricardo Bayon, then Director of the Ecosystem Marketplace and currently a Partner and Co-Founder of EKO Asset Management Partners.

He presented the idea to Jenkins, and together they began shopping it to potential partners and supporters, like the US Environmental Protection Agency (EPA), the US Department of Agriculture (of which the NRCS is a part), and various state environmental agencies. One of the groups they approached, the Blue Moon Fund, responded with a start-up grant of $25,000 and $25,000 more in matching funds that became available with the announcement of the CIG.

“The next step is to hire someone who can go out and pound the pavement and talk to the companies,” says Bayon.

Bayon says the still-unnamed project is patterned after efforts launched by early carbon innovators like the Carbon Neutral Company.

“We realized that the next big market is likely to be water,” he says, “And we started thinking of what happened in the carbon markets, and the fact that those markets grew in part because people like Future Forests (now the Carbon Neutral Company) and others were out there before the market developed trying to get people to buy carbon neutrality.”

The Pitch to Companies

“I would love to get the Tysons and Purdues of the world involved in this,” says Jenkins. “Those are companies that understand the value of a good reputation – and they certainly have room to reduce their discharges.”

Bayon believes that if such groups join the scheme, they will be motivated to reduce their discharges even before the offset phase becomes active.

“The first thing that will happen is that they will have to determine how much they’re emitting,” he says. “This is a huge step, because once they see it, they’ll say, ‘I can reduce that,’ so we will probably see reductions on-site before they have to buy offsets.”

Then comes the hard part. After all, the scheme isn’t just selling offsets: it’s selling the more nebulous idea of participating in a program designed to see if offsets work.

“We want to have a bay-wide system that people will buy into,” says Jenkins. “It will be a mix of things – maybe a portfolio of 16 different, experimental projects – which is exactly what this type of program should be.”

In addition to point-source and nonpoint-source dischargers, Jenkins expects financial institutions to participate.

“For them, it’s about getting knowledge,” he says. “They’ll just come in, hopefully make an investment, suck all our knowledge up, and then be the ones to run with this going forward – and that’s fine. That’s a fair trade.”

Experiment or not, the scheme is ultimately about results, says Tom Simpson, who heads the University of Maryland’s Chesapeake Bay Agricultural Programs and is acting as an adviser to the project.

“Any company that buys offsets will want to make sure that it’s investing in practices that result in real impacts,” he says. “For that reason, we need good, defensible estimates of the impact of the practices that we fund, as well as certainty that they are done right and maintained and operated, and probably some kind of verification system to ensure they are there over the long term.”

That will require plenty of tedious groundwork – such as the establishment of baselines, the development of ways of measuring runoff, and the modeling of various practices. Bayon says that will all pay off in the long term.

“The carbon markets got attacked when they were starting out – and are still getting attacked,” he says, adding that participating companies should be prepared to accept that they’ll end up reducing more than they get credit for.

“We have to be able to prove the additionality measurement, and be very conservative,” he says. “So, if you think you can generate five offsets, sell only three.”

Jenkins concedes it will be a fine line to walk.

“We have to keep things flexible, because we’ll be learning as we go,” he says. “But we also have to make sure that it’s above reproach.”