After six years at the helm of the Center for International Forestry Research, Frances Seymour has handed the reins to Peter Holmgren. A strong advocate of climate-smart agriculture and a key figure in the creation of UN-REDD, Holmgren comes from the Food and Agriculture Organization, where he headed 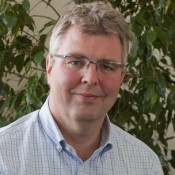 Holmgren’s tenure comes at an important time for the organization ahead of its 20th anniversary next year as one of the world’s leading forestry research institutes, currently working in more than 20 countries in Asia, Africa and Latin America.

Holmgren joined CIFOR from the Food and Agriculture Organization of the United Nations (FAO) where he was Director of the Climate, Energy and Tenure Division. He replaces Frances Seymour, who led CIFOR from 2006.

“Forestry can make a huge contribution to sustainable development around the world and help reduce the speed of climate change, but despite the awareness of the important role of forests, they continue to be cleared and degraded at alarming rates,” Holmgren said.

“CIFOR has a critical role to play in bridging the gap between research, policy and practice related to forests, food, climate change and sustainable development. Evidence from global forestry and farm research are vital to decision-makers on the local, national and global levels. But the knowledge generated by researchers needs to target and respond to well-defined policy questions.”

Holmgren, a native of forest-rich Sweden, received his doctorate in forestry at the Swedish University of Agricultural Sciences. He joined FAO in 1998 to lead the Global Forest Resources Assessment, which documents the state of global forest resources, their management and uses. Between 2003 and 2007 he was head of forest resources development at FAO.

From 2007, he led the Climate, Energy and Tenure division at FAO, coordinating FAO’s climate change work and FAO contributions to the U.N. Framework Convention on Climate Change. He also took a leading role in setting up the UN-REDD programme.

Under his leadership at FAO, the concept of climate-smart agriculture emerged, ensuring that agricultural productivity, resilience and climate change mitigation are addressed together at all levels.

The total forest area of the world is about 4 billion hectares, which represents nearly 30% of the Earth’s landmass. While global deforestation, mainly the conversion of tropical forests to agricultural land, has decreased over the past 10 years, it continues at a high rate in many countries. From 2000 to 2010, around 13 million hectares of forests was lost annually, converted to other uses or lost through natural causes, according to the FAO. This equates to an area the size of Greece being stripped of its trees each year.

Forests are essential to the livelihoods of close to 1.6 billion people worldwide. A new six-year global landmark study by CIFOR found that income from forests contributes on average more than one-fifth of total household earnings for people living in or near forests—documenting for the first time the key role that the environment plays in economic development and poverty alleviation.

Research has also highlighted the critical role that forests play in climate change. Healthy forests absorb as much as a third of the carbon dioxide released through the burning of fossil fuels, making them the world’s most significant terrestrial carbon store. Conversely, deforestation and forest degradation account for 10-15% of global human-induced greenhouse gas emissions. CIFOR is leading one of the world largest comparative studies across Asia, Africa and Latin America on how forests can not only play a role in mitigating climate change but also in helping communities adapt.

During Seymour’s tenure at CIFOR, the organization doubled its budget and developed a robust new strategy for research and impact, which is now in its fourth year of implementation. The organization currently has about 200 staff spread across three continents, complemented by almost as many associates and consultants.

“Frances’ leadership was instrumental in raising the standard and visibility of CIFOR’s work and its impact on forest-related policy worldwide,” Holmgren said.